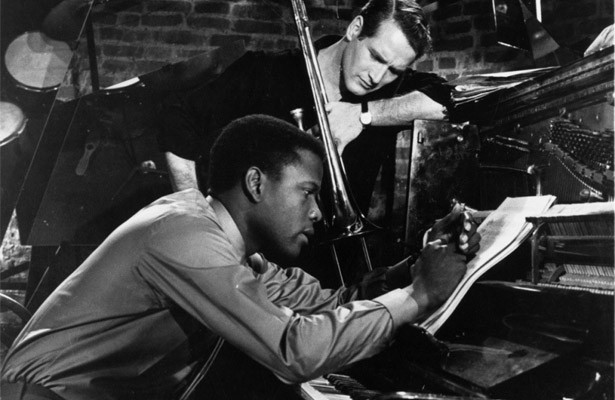 Toronto Film Society presented Paris Blues (1961) on Sunday, October 4, 2015 in a double bill with Jazz on a Summer’s Day as part of the Season 68 Sunday Afternoon Film Buff Series, Programme 1.

Our [second feature today]…presents [a] locale which embodies the romantic…atmosphere of Paris…while spinning [a] tale of familiar Hollywood material.  Paris Blues, shot in France by Martin Ritt with a French crew, reveals the Bohemian, intense, moody side of the City of Light, with endless sessions of “le jazz hot” in Left Bank clubs interrupted by frequent strolls around Montmartre, Les Halles, and other romantic sites in the city, which symbolizes burgeoning love (albeit between two couples of expatriate Americans). The Harold Flender novel, with its theme of talented, intelligent youth seeking its individual cause and fighting for it, would seem to lend itself effectively to cinematic treatment but, in fact, the film version was viewed by most critics as “under-nourished”, “flawed”, and “thin”. The parallel plot lines—young, white, American composer searching for “pure” music, devoted to his art [and] tempted by love; young, black, American musician disenchanted with the racial discord of his native land [and] awakened by love—are superficially treated, the characters never fully developed, [and] the dialogue mired in vague generalities.

Paul Newman, fresh from his success as the brooding pool-player in The Hustler, cannot save this film as the brooding jazz musician. His second film with Martin Ritt (the first was The Long Hot Summer, 1958) and his fourth with Joanne Woodward, Paris Blues teamed Newman with Sidney Poitier in one of several films of 1961 which were aimed at breaking the traditional colour barrier of Hollywood. (The other little-known films were Roger Corman’s The Intruder, Luis Brunel’s The Young One, and Jonas Mekas’ experimental film, Guns of the Trees.) But the real highlights of this film were the camerawork of Christian Matros (“Admirable for its artistic scrutiny of the Paris scene, especially several slow, sweeping, panoramic shots and a number of strikingly-composed interior scenes”, Tube, Variety.) and the moody, stimulating jazz score by Duke Ellington. In his New York Times review, Bosley Crowther points out that “the ear of the true cat might detect that it (the jazz) is played by The Duke and his boys, though this is not acknowledged in [the] credits.” The number called “Battle Royal”, a fictional competition between Louis Armstrong and the character played by Newman (the trombone dubbed by Murray MacEachern), as well as the hauntingly-beautiful rendition of “Mood Indigo”, are almost worth the price of admission.