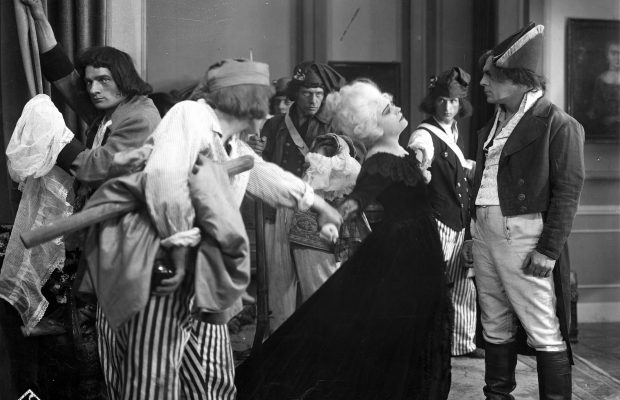 This is a rare, and rarely shown, item in the galaxy of Chaplin masterpieces.  It represents a genuine tour-de-force on the part of the great comic and film-maker, as with one minor exception, he is the only player and sustains the entire footage with his matchless pantomime, inventive gags, and brilliant manipulation of a wonderful collection of “props”.  We hear much of “one-man shows” in connection with Olivier and Orson Welles films, etc. but this is as near to a really on-man show as the screen has ever come!

Passion was one of a series of historical spectaculars–including Deception [Anne Boleyn] and The Loves of Pharaoh–that were international successes and eventually brought Lubitsch, Jannings and Negri to Hollywood.  In America, Lubitsch generally eschewed spectacle and developed into an unsurpassed purveyor of sly, sophisticated comedy–the “Lubitsch touch” becoming a world-famous trademark, both in silent and sound eras, through such films as The Marriage Circle, Lady Windermere’s Fan, Forbidden Paradise, The Love Parade, Monte Carlo, The Smiling Lieutenant, Design for Living, Trouble in Paradise and Ninotchka.  Occasional successful deviations from the “smart” formula were The Student Prince, The Patriot, The Man I Killed [Broken Lullaby] and The Shop Around the Corner.  Lubitsch died in 1947.

Of his period films Lubitsch himself said: “I would say Carmen, (Gypsy Blood), Dubarry and Anne Boleyn were the three outstanding pictures, the importance of which in my opinion was that they differed completely from the Italian school, then much in vogue, which had a kind of grand-opera-like quality.  I tried to ‘de-operatize’ my pictures and to humanize my historical characters.  I considered the intimate nuances as important as the mass movements, and tried to blend them together.”

Said Theodore Huff in the British Film Institute’s Lubitsch Film Index: “With the spectacle films Lubitsch hit his stride and became world-famous.  Hitherto, historical characters and events had been treated on the screen in a rather stiff, too-respectful fashion.  Referred toas ‘the great humanizer of history’, the German director brought to life the characters, significance and atmosphere of an epoch more vividly than had ever been the case previously (with some exceptions like Griffith’s Birth of a Nation).  Settings and costumes revealed careful research and historical accuracy.”–Passion was a landmark in motion picture history.  The first German picture released in the U.S. since before the war, it was successful all over the country–the beginning of the ‘German invasion’ with Caligari, The Golem, The Last Laugh, Variety and the rest of the amazing group to follow.  Heretofore screen characters had been largely ‘black and white’; Lubitsch demonstrated that a ‘villain’ could have human qualities and a ‘bad’ woman deserve sympathy.  This realism and these new moral values helped the picture to be a hit as much as the large sets, costumes, spectacle and sensational scenes.  The decor was obviously influenced by the formalistic style of Reinhardt’s stage designs, as was the expert handling of the mob scenes.  To his stage training Lubitsch added his characteristic flair for drama, comedy and human touches.  There is justifiable dramatic license in some telescoping of events–Miss Negri gave a colorful performance rarely equalled for vitality and emotional depth.  Never had a screen star burst forth on the public in such full bloom.  With grace, verve and a vivid radiance, she created a living character–a fascinating and disturbingly sympathetic figure, a “toy of erratic destiny”. Jannings was second to her with his human portrayal of Louis XV.  The photography, though possessing depth and clarity, did not have the sparkle of American films due to the fact that backlighting and other devices were not used–the continuity was jumpy and episodic and had to be smoothed out by clever titling.  However, the entire production came as a fresh impetus and needed stimulation to audiences and American film-makers”.

Lewis Jacobs in The Rise of the American Films: “So skillfully were they (the historical spectacles) made, so extraordinary in treatment and rendition, they were acclaimed everywhere.  Hollywood was amazed to see the American public go wild over ‘costume dramas’ which they had ruled out since the war as strictly unpopular.  Unlike many foreign imports, Lubitsch’s films were released nationally and hundreds of thousands of Americans saw and admired them.  For his spectacular, stirring and original work, Lubitsch was hailed as ‘the Griffith of Europe’–Passion perhaps evoked more acclaim than any other.  Featuring a striking personality, Pola Negri, the film displayed remarkable directorial craftsmanship, unusual care and devotion in the execution–as much a depiction of DuBarry’s times as a personal story–artfully  contrasting the grandeur of court life with the barbaric poverty of the people–authenticity of atmosphere, settings and costumes, and fine taste exhibited in their application–the dramatic manipulation of masses and the continuity of the whole made the spectacle powerful in effect”.

The Other Side of the Fence

Paul Rotha in The Film Till Now dismisses these films as “commercial products of the property room and Reinhardt”.

Bardeche and Brasillach in History of the Film feel that these German spectacles were “strenuously nationalistic works of propaganda”, inteded to “throw a disobliging light on the past of their recent enemies, the Allied nations–lavish spectacles carefully livened up with a controversial air–a rather childish kind of sexuality gave color to these films, in which history is regarded as a supreme fantasy”.

Siegfried Kracauer in From Caligari to Hitler says: “The story’s contempt for historic facts is matched only by its disregard for their meaning–drains the Revolution of its significance.  Instead of tracing revolutionary events to their economic and ideal causes, it presents them as the outcome of psychological conflicts–it does not exploit the passions inherent in the Revolution, but reduces the Revolution to a derivative of private passions.  If it were otherwise, the tragic death of the lovers would hardly overshadow the victorious rising of the people–by degrading the French Revolution to a questionable adventure, the nihilism (of such films) revealed itself as a symptom of strong anti-revolutionary, if not anti-democratic, tendencies in postwar Germany”.