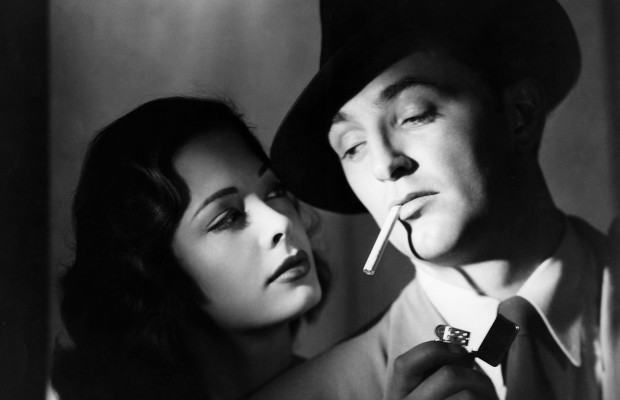 Toronto Film Society presented Out of the Past (1947) on Monday, March 24, 1975 in a double bill with Pursued as part of the Season 27 Monday Evening Film Buff Series, Programme 5.

Jacques Tourneur is becoming one of TFS’s preferred directors.  His films Cat People (1942) and I Walked With a Zombie (1943) have been screened in recent years to acclaim by our members.  The Comedy of Terrors (1964) delighted this season’s audience at our International Series.  And I feel certain that tonight’s very different film will please our Film Buffs.  All of these films uphold Tourneur’s reputation for bringing a French sensibility and style to the American cinema and demonstrate the scope of his talents.  Cat People and I Walked With a Zombie are classics of the horror genre.  Comedy of Terrors is an excellent satire.  And Out of the Past is acknowledged by many critics as one of the masterpieces of film noir.  Other notable films by Tourneur include The Leopard Man (1943), Canyon Passage (1946), Stars In My Crown (1950) and Curse of the Demon (1958).  Born in Paris in 1904, Tourneur spent part of his childhood in Hollywood (where his father Maurice Tourneur was directing), then began his film career in France before settling in America.  Perhaps it is this mixture of cultures in his background that gives him his unique vision of North American life.

Out of the Past is a superb example of the bleak, pessimistic style-genre called film noir which developed in Hollywood in the 1940s.  In it are all of the familiar noir themes, atmosphere and stylization.  The episodic storyline concerns a cynical private detective who is hired by a gambler to track down a mysterious lady, and who, because of his fallibility, lets himself get fatally involved in robbery and murder.  Told in partial flashback, with voice-over narration, swift transitions and gutsy yet poetic dialogue, the plot is almost deliberately confusing.  But the ‘whodunnits’ of the plot are unimportant; what is important is the way in which the story and the characters are realized.  The cast, the writer and the director are magnificent.  With the aid of cameraman Nick Musuraca, Tourneur’s visual style suffuses every scene and supplies a wealth of images: dramatically lit interiors, stunning day-for-night shots of Mexican beaches, and meticulous outdoor scenes, which stay in the mind long after viewing the film.  As in the best film noir tradition, Out of the Past depicts a harsh world ruled by an inexorable fate.

When reviewing tonight’s film James Agee said of Robert Mitchum, “It seems to be a mistake to let him tangle with the ladies.  In love scenes his curious languor becomes a brand of sexual complacency that is not endearing.”  Proving once again that men know very little about who or what turns women on sexually.

Robert Mitchum (born 1917) ran away from home in his teens and worked at various menial jobs (including ditch-digger and boxer) while he hobo-ed around the country during the Depression, even serving time on a chain gang for vagrancy.  He worked a long apprenticeship as an extra in films before attaining a major role in The Story of G.I. Joe (1945)–the film that gave him his only Oscar nomination.  Mitchum imparts some of his own non-conforming, independent spirit to Jeff Bailey, the doomed detective in tonight’s film.  His throw-away acting style is deceptive and there are diverse opinions of his talents, from Katharine Hepburn telling him frankly that he couldn’t act and she considered herself unlucky when she had to make Undercurrent (1946) with him, to Charles Laughton, after directing him in Night of the Hunter (1955), saying Mitchum was one of the best actors in the world.  Mitchum’s own opinion is that he is “just a ray of hope for the great unwashed”.  But a brief list from over 65 films he has made during his career will remind the filmgoer of the powerful and expressive talent Mitchum has brought to a variety of roles: Pursued, River of No Return (1954), Home From the Hill (1960), The Sundowners (1960), Ryan’s Daughter (1970), The Friends of Eddie Coyle (1973).  It is a pity that Mitchum has never played Philip Marlowe.  With his roughhewn looks and inscrutable manner he would be a natural for the part.

Out of the Past was Kirk Douglas’s first major role and his portrayal of a nervously energetic gang leader contrasts nicely with Mitchum’s nonchalant shamus.  Jane Greer was only 22 when she played Kathie and she  handles the part of a femme fatale with impressive skill, exuding an aura of stunning sensuality.

Some members have suggested that we advance our FILM BUFF SERIES starting time from 8:00 PM to 7:30 PM next season.  Before making a decision TFS would like to hear from more of its members.  Please check either 7:30 PM or 8:00 PM, tear at the dotted line, and drop this questionnaire in the question box outside the auditorium door during intermission or after the show.