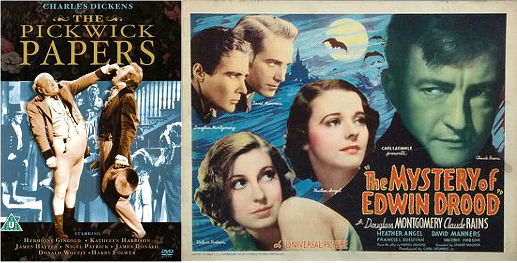 Toronto Film Society presented Pickwick Papers (1952) on Sunday, December 13, 1987 in a double bill with The Mystery of Edwin Drood (1935) as part of the Season 40 Sunday Afternoon Film Buffs Series “A”, Programme 5.

Charles Dickens was a part of the film world almost from the beginning.  Perhaps before: Eisenstein, in a famous essay of 1944, “Dickens, Griffith, and the Film Today,” plausibly traced most of the innovations of the early film, as it moved beyond the conventions of the stage, to those very novels of Dickens.  Thus the crosscut can be found in the alternating narratives of Bleak House, the closeup in the opening sentence of The Cricket of the Hearth (“The kettle began it.”), and even the dissolve in the tumbrils rolling to the Guillotine, with their intimations of royal or noble equipages from the past, in A Tale of Two Cities.  And if Dickens bequeathed his formal structures to the film, he bestowed with an even more liberal hand his materials.  Thus by the time Griffith made The Birth of a Nation, in 1915, no fewer than fifteen of Dickens’s novels had already been adapted to film, and of those fifteen three had been adapted four times or more: Oliver Twist, the most frequently adapted even to this day, David Copperfield, and A Christmas Carol.

There is good reason for this relationship between the novels of Dickens and the motion picture and now, of course, television (which we scarcely need Alistair Cooke to explain for us).  As Eisenstein observed, Dickens’s especial quality is an “optical” one–he directs us to visualize his characters.  And if Henry James, dwelling in the internal worlds of his personages, stands at one pole of visuality (notoriously intractable to film treatment), Dickens stands at the other pole, supremely external.  Even the opening paragraph of Edwin Drood, which describes a vision rom within the central character’s mind, as waking from an opium dream he sees the cathedral spire and the bedpost as versions of the same, with clashing cymbals and flashing scimitars at odds with rural piety–even this internalized world is presented in highly “optical” terms.  And so powerful are the images in that opening paragraph that they form, inevitably, the basis of the film’s opening as well: from jasper’s point of view we see the bedpost.  Moreover, the inherent symbolism of the novel’s opening, depicting a man torn between his respectable life as a rural choirmaster and his drug-addict’s lie in London, is conveyed not only through the imposition of the prose on the celluloid, but also through what is surely the most striking moment in the whole film: the dissolve from Jasper’s feet, as he stumbles out of the opium den, to his feet, now with a cassock brushing low tot hem, as he moves in solemn choral procession. 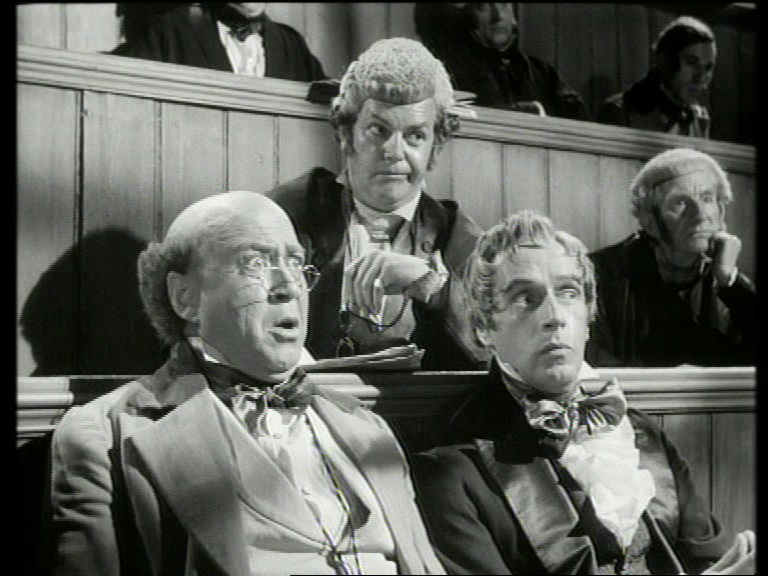 What we have this afternoon, of all the innumerable Dickens adaptations, versions of his very first novels and his very last.  Pickwick Papers, very much in the rollicking picaresque mode of the eighteenth century and Tom Jones, was written before Dickens was twenty-five; The Mystery of Edwin Drood, was written–and left unfinished–when he was approaching sixty.  And our two films represent the poles of Dickens adaptation: the British films have tended to be truer to the national spirit of the novelist, giving us genuine eccentrics rather than grotesque caricatures (the David Lean films, for instance); the American films have tended to underline the grotesqueries and pick out the highly familiar characters and passages (the Selznick films of the 1930s, for instance).

Any Dickens novel is so full of fascinating characters that any adaptation is likely to have, in its acting credits, a roll-call of the reigning great character actors, and the British film of 1952 is a classic example of this style.  (The novel had been filmed three times before, beginning with excerpts in an Edison film of 1912, and the first great comedian, John Bunny, had played in a version the year after).  The Pickwick Papers is a quite overtly episodic, not to say disorganized, novel, yet those characters who appear only to disappear in the next chapter are amongst its greatest  glories, from Mrs. Leo Hunter reciting her “Ode to an Expiring Frog” to Sergeant Buzfuz relentlessly pursuing Pickwick for his alleged breach of promise to Mrs. Bardell.  In the film, as bravura as the performances are, the Dickens blueprint remains visible.  (The ultimate proof of Dickens himself dominating his films is that even W.C. Fields is fitted into the role of Micawber in the Selznick David Copperfield rather than the other way around).  Here both the marvellously solemn-scatty Joyce Grenfell, as Mrs. Leo, and the facially mobile Donald Wolfit, as Buzfuz, are both prime pieces of ham, but of the finest Dickens-Black Forest variety.  And not even an exception to this Dickensian domination is the great George Robey, here playing one of his last performances, as Tony Weller.  If these are the character (minor?) roles, the leading roles are no less perfect for the Dickensian purpose: James Hayter, whose most memorable earlier role may have been “The Verger” in one of the Somerset Maugham compilations, was born to play Pickwick; James Donald, who has always played stiff upper lips and comic parts (as well as the terrifying Mr. Murdstone in the 1969 version of David Copperfield) takes over as of right the bland and bemused Winkle; and Nigel Patrick, the epitome for a quarter of a century of self-possessed chutzpah, from the science master of The Browning Version to “Mr. Know-All” in one of those Maugham anthologies, is the essential confidence man, Jingle.

By contrast, of course, Edwin Drood is the product of Dickens’s late, dark, brooding imagination, less abundant, but more disciplined; written after the break with his wife and his association with the young actress who infuses his late, dark heroines (Estella, Bella Wilfer, Helena Landless here; the actress’s name was Ellen Ternan).  But Edwin Drood was also, most likely, an attempt to best his friend Wilkie Collins, who in The Woman in White and The Moonstone had made the field of mystery and detection his own.  It is one of the great ironies of literature that a novel in which the solution of the mystery was to be withheld to the end remained unfinished with the sudden death of its author.  When we all get tot eh big reading-room up in the sky, this is certainly one of the first questions that most English professors will want to have answered!    Though there are in fact several questions: Is Edwin Drood actually dead?  If he is, was he murdered by Jasper?  Who is Datchery, the strange hirsute detective who appears from nowhere, obviously disguised?  The film confronts only these three of the many questions posed, assumes that Drood is dead, and buried in quicklime, assumes that Jasper is the murderer, ignoring Dicken’s casting of suspicion on others, and identifies Datchery as Neville Landless, whom we very early see taking off his makeup. 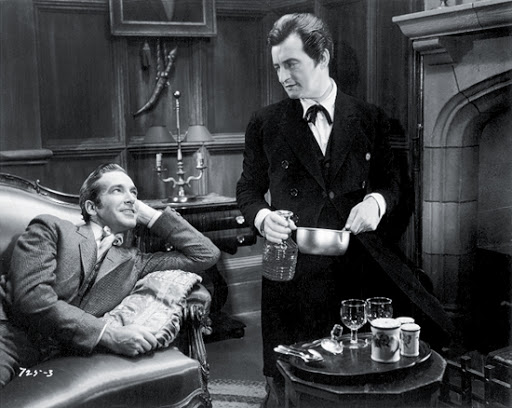 At the centre of Edwin Drood, then, is a tortured protagonist, leading a double life, passionately in love with a much younger woman who loves the protagonist’s ward (at least for the present).  Since this was rather like Dickens’s own state at the time, the part o Jasper is charged with passionate intensity.  And Claude Rains, playing the part in the film, lacks none of the necessary intensity.  This was only his fourth film, and the earlier three, The Invisible Man, Crime Without Passion, and The Man Who Reclaimed His Head, all had him as the misfit or murderer, the man on the outside looking in.  With the unctuously smirking Douglass Montgomery as the antagonist, it is impossible not to see him as the sympathetic character he is, at least unconsciously, int he novel.  Though this is an America film,t here are enough British actors (from Rains himself, to Valerie Hobson and Francis L. Sullivan, who a decade later would play key roles in both Lean films) to give it something o the right flavour.  The director, Stuart Walker, was a routine workman, without auteurist pretensions; one of the most interesting features of the film outside the performances are those Universal sets, left over from Frankenstein and The Mummy.  Indeed, one could argue that an attempt has been made to force Dickens into the matrix of a typical Universal horror film of the period.  But the true auteur of any Dickens film–the major theme of these notes–is Dickens himself.  So whatever your attitude at this time of year–Humbug, or God Bless Us Every One–it is Dickens who lurks in your imagination, not Alastair Sim.  He was a far, far better novelist than any adaptator who is likely to come along.