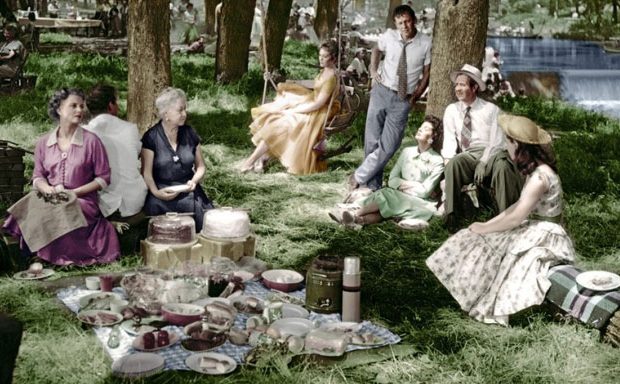 It began in 1955 with a phone call to Joshua Logan from Columbia Pictures boss Harry Cohn, inviting him to direct the studio’s planned version of William Inge’s play “Picnic”.  Although Logan had directed the play during its successful Broadway run in 1953, he was surprised and flattered by Cohn’s offer, for he had not been involved in the direction of a film since 1938.  Nevertheless, he gladly accepted, and set to work casting the picture.

Although Kim Novak was Columbia’s leading lady at that time, Logan maintains in his memoirs that he was never pressured into accepting the moderately talented Miss Novak, and in fact, felt that she was right for the role of Madge.  Nevertheless, he did test Janice Rule, who had played Madge on Broadway.  Unfortunately Miss Rule, feeling that Kim Novak had the part sewn up and never having played a leading role before, failed the test because of nervousness.

William Holden had already been cast as the itinerant drifter, Hal Carter, before Logan arrived on the scene, as he owed Columbia a commitment.  Opinion seems to be divided as to his suitability for the part.  Although Logan was pleased with Holden’s performance, some critics felt that Holden was being forced to delineate the complexities internal and external of a character quite opposite to his own and with which he was not subconsciously in sympathetic identification.  Holden was to some extent limited to playing extensions of his own assertive, self-assured personality, and the wordlessness, dreamy escapism, and unrealistic outlook of Hal Carter were alien to him.  Whether Ralph Meeker, who played the role on Broadway, would have been better poses an interesting question.  At any rate, let the viewer judge.

Susan Strasberg, the daughter of Lee Strasberg of Actors Studio fame, played Miss Novak’s teenaged sister.  Rosalind Russell gave a colorful performance as a love hungry and alcoholic spinster (played by Eileen Heckart on stage), while the reliable Arthur O’Connell repeated his role as her half-hearted suitor.  The role of Alan, Hal’s friend, was given to Cliff Robertson, as by 1955 Paul Newman was a major star beyond playing supporting roles as he had two years earlier, playing Alan on stage.

Logan recounts the anecdote that, in a scene calling for her to cry, Kim Novak insisted that Logan pinch her arm so hard that she would cry–the only way she could bring out the tears, she maintained.

Picnic in essence, is a simple story–of the effect of a drifter (Holden) on the lives of several people in a small Kansas town, over a Labour Day weekend.  Hal Carter arrives in town aboard a freight train, and looks up an old college friend (Alan Benson) to see about a job.  Benson invites him to the town’s annual picnic, where Madge Owens, Benson’s fiancee, begins to fall in love with him.

The film was made at an interesting juncture in Hollywood’s history.  Censorship had relaxed to the point where sexuality was more forcefully depicted than previously, although of course nothing nearly as frank as today.  In fact, the scenes of the muscular and virile Holden drawing admiring looks from the townswomen when he takes his short off may seem somewhat overstated.  Nevertheless the film underlines how Madge could give up the dull but respectable Alan for the unpredictable but vital Hal.

Location shooting, after the usual (for Hollywood) two weeks of rehearsal, began in Salina, Kansas, a typically picturesque American small town.  This brings up an interesting point–if Logan was trying to convey the shillyshalling atmosphere the boredom and frustrations of small town life, one wonders if he would have not been better off using a truly wretched dreary community, as Peter Bogdanovich did 15 years later in The Last Picture Show.  However, at this time Hollywood still tended to prettify and glamorize locales and situations, for better and for worse.  The actual picnic, elaborate and overblown, is probably the best example of this philosophy, although James Wong Howe’s photography is so exquisite, particularly the scenes of the Japanese lanterns reflecting in the water, that the viewer is entranced.  Picnic is a fascinating piece of Americana providing a look at manners and mores (as seen by Hollywood) of a generation ago.