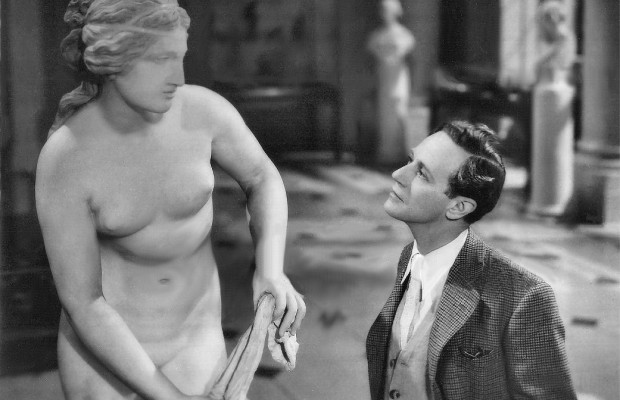 When Leslie Howard returned to his native England from the U.S.A. in August 1939, following appearances in Gone With the Wind and Intermezzo, it was to direct and star in a film to be entitled The Man Who Lost Himself.  However, this project was cancelled with the outbreak of war, and Howard, a sincere patriot, began searching for ways in which to serve his country.

He joined an “ideas committee” at the Ministry of Information, sifting and developing projects for propaganda films.  One such film was 49th Parallel, a classic film about the escape of a U-boat crew across Canada.  Howard played a cameo role, as did numerous other performers, such as Laurence Olivier.  Subsequently, he appeared (as himself) in the documentary From the Four Corners.

In 1941 Howard produced and directed as well as starred in Pimpernel Smith, which utilized the brilliant idea of updating the classic Scarlet Pimpernel story to Germany on the eve of World War II.  Now, though, the enemies were Nazis, far more dangerous and ruthless than Robspierre’s minions during the Reign of Terror.  Howard had played Sir Percy Blakeney in 1935’s The Scarlet Pimpernel.

Howard played Horatio Smith, a mild-mannered, absent-minded Cambridge professor leading his archaeology class on a field trip through Germany.  His character is perfectly established in the opening sequences in England in which he delivers an nimpromptu lecture to an astonished group of schoolgirls and, arriving late at his own scheduled lecture, proceeds to drive the female students away with caustic remarks about women at universities.

During their tour of Germany, Smith’s students gradually realize that he, like the foppish Percy Blakeney, is more than what he seems–that the mild-mannered professor is, using a succession of brilliant disguises and ruses, spiriting dissident artists, scientists and intellectuals out of Germany and the clutches of the Nazis.

Pimpernel Smith was made, not only as entertainment, but to reinforce morale on the home front.  As such, it used an uniquely British weapon against the Germans–ridicule.  The keynote of Howard’s mocking attitude to Germany is set by the shot of a poster of a buxom German girl saying “Welcome to Romantic Germany” accompanied on the soundtrack by the noise of jackboots and gunfire.  Thereafter he proceeds to ridicule the Germans as arrogant, uncultured, humourless, and uncivilized.

There are a succession of very funny, beautifully constructed scenes in which this is done.  General von Graum, the Gestapo chief (the portly Sullivan–Howard must have been aiming a dart at Luftwaffe Commander Herman Goering), investigates the English secret weapon–their sense of humour.  The Nazi ploughs through P.G. Wodehouse, Edward Lear, Lewis Carroll and “Punch” without raising a laugh, and concludes that the English sense of humour is a myth.  The scene of him solemnly reading out jokes to his uncomprehending staff is quite priceless.  There is also the sequence in which high-level discussions are held with a string quartet to try and identify the tune which the “Pimpernel” whistles–it is actually “There is a tavern in the town”!  Smith himself sends up von Graum unmercifully at a reception when the latter insists that Shakespeare was German.  Later, Smith does a hilarious impersonation of a Nazi official in pinstriped suit, with rolled umbrella, constantly threatening to telephone Dr. Goebbels.  Throughout, Pimpernel Smith keeps up a brisk narrative pace, flitting from place to place, filled with tension and narrow escapes.

It is in the powerful climatic scene at the frontier, though, that the two opposing philosophies of von Graum and Smith are most dramatically put into words.  Beneath the tweedy, casual, pipe-smoking exterior of Smith the absent-minded archaeologist is revealed the strength, intelligence, courage and determination which the Germans will underestimate–to their fatal sorrow.

Pimpernel Smith, on of Leslie Howard’s last films, was also one of his best–for in it he was playing, essentially, himself–vague, intellectual, shyly charming, but sincere, patriotic, and with a sense of purpose–and always very English.  Although he is remembered for his portrayal of Ashley Wilkes in Gone With the Wind, a role which he disliked, Howard would probably prefer to be remembered for Pimpernel Smith and The First of the Few (1942), in which he played R.. Mitchell, inventor of the Spitfire.

Leslie Howard was a superb actor–deceptively so, because he made it seem so easy.  Like all the great British actors–Laurence Olivier, James Mason, Herbert Marshall, Leo Genn, and particularly Ronald Colman–Howard’s strength lay in his voice–clear, mellow, dignified but never pompous, intelligent, wistful–one could listen to him for hours.