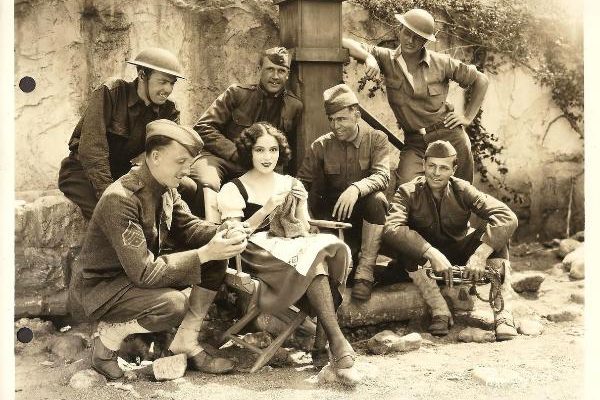 The programme will open with Citizen Varek, featuring Joseph Furst–a National Film Board short touching on some of the problems facing new Canadians.  There will be a 10-minute intermission during the feature film.

What Price Glory  U.S.A. 1927.  Produced by William Fox.  Directed by Raoul Walsh.  Based on the play by Laurence Stallings and Maxwell Anderson.

When What Price Glory opened on the Broadway stage it created a sensation because the frankness of its language and its tough, disenchanted view of war and soldiering were then unprecedented in the American theatre.  Captain Flagg and Ssergeant Quirt, instead of the traditional noble and romantic heroes, were made of recognizable common clay–soldiers who regarded war as a dirty job to be done and took their uninhibited pleasures where they found them–roistering “friendly enemies” who battled over “dames” wherever the fortunes of war took them.  These figures became something of a legend and are today, of course, cliches.  The play was hailed as everything from a serious expose of the seamy side of army life to “a frankly nostalgic appeal to the bawdy wartime spirit”.

When Raoul Walsh (who also contrived to get away with hitherto frowned-upon material in filming Gloria Swanson’s Sadie Thompson) brought What Price Glory to the screen, he surprised many by retaining the rowdy humor of the play and even much of its language, which (while not of course printed in the subtitles) was rendered in pantomime and gave rise to something of a lip-reading vogue among movie audiences!  The film included, too, the play’s impassioned anti-war outburst by a shell shocked soldier in an underground dressing station, and takes advantage of the scope of the film medium for some impressive battle footage.  All in all it was certainly one of the better silent war films, in spite of the addition of some sentimental and romantic moments.  On the basis of this movie’s success, McLaglen and Lowe continued to play Flagg and Quirt (under those and other names!) for years, but none of the later films had the original vigor.

RAOUL WALSH has never made a great picture but has proved a reliable and thoroughly competent purveyor of entertainment films over a period of many years.  Though he has successfully turned his hand to Oriental spectacle (Fairbanks’ Thief of Bagdad and The Wanderer), swashbuckling adventure (Captain Horatio Hornblower and The World in His Arms) and even musicals (Crosby’s Going Hollywood), he is perhaps most at home in earthy, hard-hitting masculine melodramas like They Drive By Night, Manpower and High Sierra.