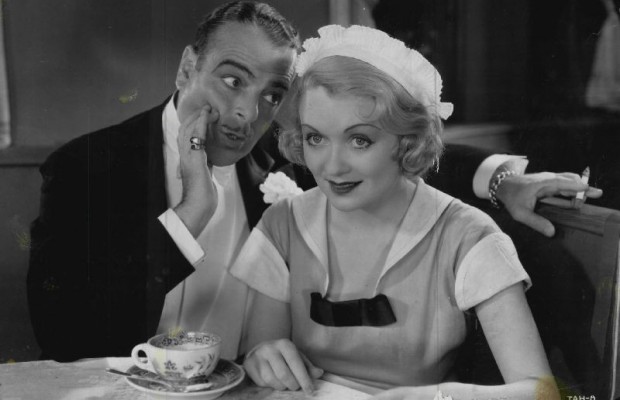 Toronto Film Society presented What Price Hollywood? (1932) on Monday, December 16, 1974 in a double bill with The Road to Glory as part of the Season 27 Monday Evening Film Buff Series, Programme 2.

What Price Hollywood? was one of the earliest films to deal with the film capital in a realistic, serious manner as opposed to those pictures such as Once In a Lifetime (1932) that kidded Hollywood as a crazy, kooky place.  The story, of a waitress getting a break into movies from an alcoholic director, who watches her star ascend while he descends, has much of the same outline as the two later versions of A Star is Born, 1937 (which Selznick also produced), and 1954 (which Cukor also directed).  Incidentally What Price Hollywood? was initially written as a comeback vehicle for Clara Bow, but she was far overweight and could not lose the weight in time.

George Cuker (b. July 7, 1899) is famous for his skill with actors (Lowell Sherman is brilliant in tonight’s film and Constance Bennett was never better), his unobtrusively graceful camerawork, his complete mastery of dialogue, and his exquisite taste.  His career is both long (forty-five years as director) and distinguished, with his filmography, including A Bill of Divorcement (1932), Dinner at Eight (1933), Little Women (1933), David Copperfield (1935), Camille (1937), Holiday (1938), The Women (1939), The Philadelphia Story (1940), Gaslight (1944), Adam’s Rib (1949), Born Yesterday (1950) and Bhowani Junction (1956) being a most eloquent example of intelligent craftsmanship.

Constance Bennett (October 22, 1905 – July 24, 1965) is largely forgotten today.  A much more dynamic and varied actress than her sister Joan, she was one of the biggest stars in the early ‘talkie’ period, earning up to $40,000 per week for some films.  James Robert Parish, in The RKO Gals, wrote: “Any survey conducted in the early 1930s to determine which Hollywood stars would be best remembered by the public decades hence, would certainly have included Constance Bennett’s name near the top of the list.  In those early Depression years she was considered the epitome of screen chic, not aristocratic like Norma Shearer or Ina Claire, but sanguine and crisp, a woman to pique the imagination with her long-limbed, fluid figure and those luminous wide eyes accenting a pert face.  …She was quixotic, turbulent, stubborn, aggressive, theatrical and full of positive guiles, dynamic and dogmatic enough (like her famous actor father, Richard Bennett) to force her will on others without thought of the consequences.  She was a girl who did not have any sense of diplomacy, and as extravagantly as she dressed or entertained, so she dashingly called a spade a spade with little concern for the inevitable repercussions.”

If Bennett is forgotten today, Lowell Sherman (October 11, 1885 – December 28, 1934) as an actor is almost unknown.  Although he was already acting in films as early as 1920 (in D.W. Griffith’s Way Down East) and his career encompassed stage, vaudeville and burlesque acting, Sherman’s work as the director of Mae West in She Done Him Wrong (1933) and of Katharine Hepburn in Morning Glory (1933) is all that is remembered.  Commenting in that direction, Andrew Sarris wrote: “His [Sherman’s] civilized sensibility was ahead of its time, and the sophistication of his sexual humor singularly lacking in malice.”