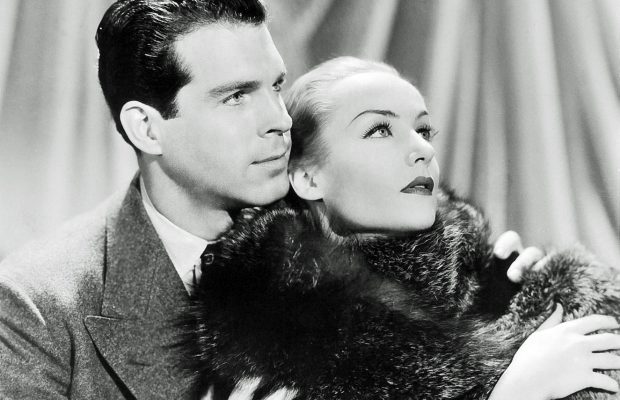 Toronto Film Society presented The Princess Comes Across (1943) on Sunday, February 12, 2017 in a double bill with The Swan as part of the Season 69 Sunday Afternoon Film Buff Series, Programme 5.

If you like Greta Garbo (and I don’t know too many people who don’t) and Carole Lombard, then you’ll enjoy watching The Princess Comes Across directed by William K. Howard.  It’s a mystery/comedy/romance all rolled into one delightful story about a Swedish princess aboard an ocean liner sailing towards an acting career in Hollywood.  Joining the voyage is handsome bandleader King Mantell, played by Fred MacMurray, an unidentified escaped killer and a great cast of character actors including Mischa Auer, George Barbier, Douglass Dumbrille and Porter Hall.  Alison Skipworth plays Princess Olga’s platinum blonde chaperone while William Frawley is Mantell’s manager.

The film is strewn with fabulous shipboard sets (look out for those lamps), staterooms unlike those seen when you and I travel on a cruise ship and, for the most part, beautiful gowns designed by Travis Barton.  And if you were here to see our last Sunday double bill, you will once again have a chance to hear Fred warble a tune.

In her book, Carole Lombard: Twentieth-Century Star, Michelle Morgan stated that Lombard was ill with throat troubles and had reported to the set against the doctor’s orders.

As well, MacMurray was involved in a battle over his right to earn more money now that he was officially a star.  Carole heard about his predicament and was very forthright in her advice to go on strike.  Fred did as he was told and, on various days, would go out to visit friends instead of reporting to the studio.  On his return home, MacMurray would find messages from executives threatening him with termination.  Of course he was concerned about the demands but Carole advised him to stay firm as she was sure they were bluffing.  She also reassured him that no matter what, she would not be prepared to work with anyone but him.  These supportive comments from the actress gave MacMurray the strength to carry on and eventually he returned to the studio with a new contract.  He would forever tell reporters that he owed it all to Carole and the two of them remained friends until her untimely death in a horrible plane crash on January 16, 1942.

So where does Garbo come in?  Watch as Lombard channels her as Princess Olga.

Carole Lombard based her “Princess” character on Greta Garbo.

Fred MacMurray, an accomplished musician, actually played his own concertina numbers in the film.

George Raft initially was cast as Carole Lombard’s co-star, but he walked off the set at the start of production, objecting to Ted Tetzlaff as the cinematographer.

The veiled hat Lombard wears in the opening scene aboard the ship is the same hat, in a different colour, worn by Marlene Dietrich in Desire, which was released the same year, by the same studio, with the same costume designer, Travis Banton.

The lovely Lombard has a great time swanning about as a bogus princess aboard a luxury liner, becoming involved with a few zany characters. And Fred sings her a love song! – Barry Chapman

Lombard, posing as royalty on an ocean voyage, meets romantic MacMurray; together they are involved in a whodunit. And Fred sings “My Concertina.” Delightful blend of comedy and mystery. – Leonard Maltin

The Princess Comes Across stands out from the rest of Carole Lombard’s Paramount comedies by virtue of not being a pure comedy. It was a deliberate attempt at a genre mash-up: a cross between those giddy Paramount romances and the classics 1930s whodunits. The filmmakers opt for some jarring shifts in tone. The beginning of the film is pure screwball, with Lombard doing a killer Greta Garbo parody as the counterfeit Swedish princess. But halfway through the film, the murder mystery angle takes center stage and Lombard’s antics quiet down (her discovery of the dead body is played dead serious, with the camera zooming in on her shadowed, horrified face). Compared to another comedy-mystery like The Thin Man, The Princess Comes Across is much more serious in tone. When Nick and Nora are threatened, they laugh it off. When Lombard and MacMurray are threatened, they are genuinely scared. – The Girl with the White Parasol