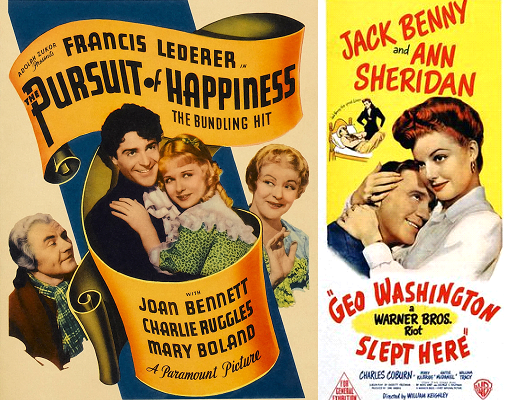 When in the course of human events the United States separated itself from a tyrannical government and asserted certain unalienable rights, among which were Life, Liberty and the Pursuit of Happiness, it reinforced and took with it a mythology which remains strong to this day.  Both our opening films draw upon that mythology.  The first is set in the Revolutionary period, where the hero takes his pursuit of happiness in a rather more personal and self-interested way than Jefferson and the farmers may have intended, and the second depends upon the grasp that the father of his country has upon the American imagination and loyalties, so that George Washington Slept Here becomes a formula for redeeming a dilapidated farmhouse seemingly beyond all redemption.

Both films are by routine directors, who began their careers in the early sound period, and who had stage experience as actors.  Alexander Hall’s most esteemed film was Here Comes Mr. Jordan, which cultivated the wartime taste for survival after death, and he also directed one of Ronald Reagan’s best light comedies, Louisa.  William Keighley specialized in adventure films (Each Dawn I Die), while making some snappy comedies (The Man Who Came to Dinner.)  But perhaps the most significant feature of tonight’s two films is that they were both based on strong stage plays.  The authorship of the two films is less the directors’ than the playwrights’ and the stars’.

The Pursuit of Happiness puts a young Hessian conscript into contact with a nubile and eager young colonist.  Changing sides, he quickly adapts to the American way and pursues the happiness which the other soldiers are fighting to secure.  The pursuit the young Hessian seeks to engage in is that of “bundling” with this sprightly young Yankee miss, Prudence Kirkland.  “Bundling” being a good old New England method of courtship which find the suitor and the sought in bed together, chastely separated by a bolster.  The system has the full support of Prudence’s parents, played by that perennially bickering married couple Charlie Ruggles and Mary Boland, though they would certainly prefer Prudence to be bundling with young Thad Jennings, who has thirty head of cattle, while the young Hessian has only his charm.  Of course all turns out well at the end, and the Hessian wins his girl as the Yankees win their nation.  More than likely the bluenose anti-bundler, Walter Kingsford, who is a much greater threat to the happy ending of the film than the British, ended up flying to Toronto.

Carrying the film, the Ruggles-Boland sideshow apart, are the two stars, Franices Lederer and Joan Bennett, both happily still with us fifty-five years after the film was made.  Joan Bennett, in fact, was the scheduled guest of Honour at this year’s Cinecon in Cleveland, over Labour Day.  Her career ranged over six decades, under such directors as Lang, Ford, Renoir, and Ophuls, and the opposite such leads as John Barrymore, Gregory Peck, and Humphrey Bogart.  Her roles ranged from ingenues (Amy March, or the suspect of The Trial of Vivienne Ware) to vicious femmes fatales (in the two Lang Films, The Woman in the Window and Scarlet Street); and her hair colour corresponded, ranging from youthful blondeness to the raven-tressed evil of her later impersonations.  Lederer’s career began on a down note, in Pabst’s Pandora’s Box with Louise Brooks.  He was a German-Czech who firmly established himself on European stage and screen as a romantic leading man, a career he extended to Hollywood, where The Pursuit of Happiness was his second picture.  He embodied continental sophistication in a number of films of the 1930’s, most notably Mitchell Leisen’s classic screwball Midnight; later the sophistication was sometimes a veneer for something more sinister, as in I Married a Nazi where, as the title character, he is married to Joan Bennett.  But we hope the marriage of Prudence and her young Hessian turned out better than that!

Our other film George Washington Slept Here, is set more than a century and a half after the Revolution.  Like The Pursuit of Happiness, it owes many of its best qualities to the play on which it is based, which was one of the many successes of that great pair of wits Kaufman and Hart; perhaps their greatest success had been The Man Who Came to Dinner, which William Keighley brought to the screen in this same year of 1942. 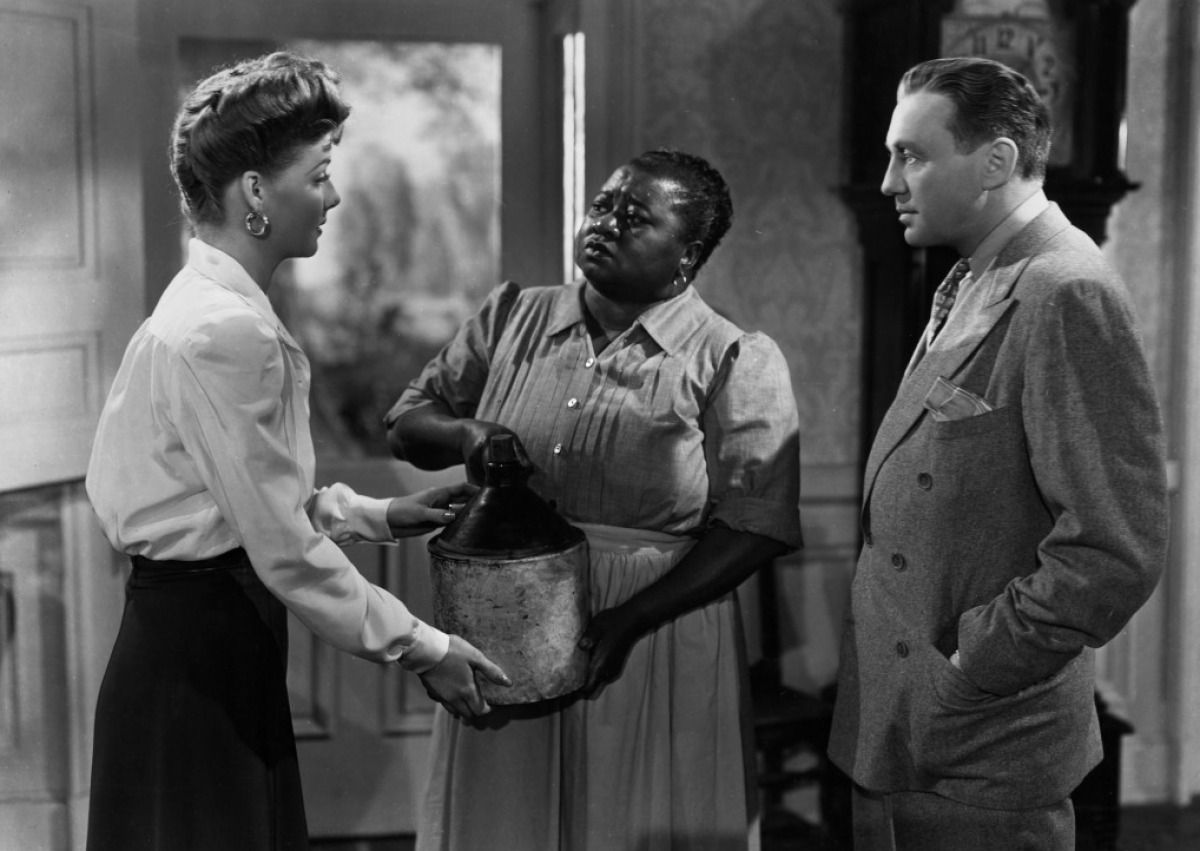 The tone of the film is much more clearly vaudeville than verbal, the comedy much broader than that of the play; and much of this breadth is explicable by the presence of Jack Benny in the leading role.  “This package of farcical nonsense,” Bosley Crowther called the film in The New York Times, and the basic situation is certainly that of farce.  Jack and his wife Ann Sheridan have bought a farmhouse in rural Pennsylvania, and are trying to make a home despite the difficulties presented by obnoxious neighbours, ne’er-do-well relations, inefficient hired hands, and, above all, rotting timbers and leaking roofs.  If Benny had fallen through one more floor…  Of course, once again, all turns out well, but only through the intervention of him who is first in war, first in peace, and first in the hearts of his countrymen.

The supporting cast is perhaps stronger in this picture, including such delights as Charles Coburn (with something of the confidence man of The Lady Eve), Hattie McDaniel, and Percy Kilbride (gearing up for all those Ma and Pa Kettle pictures).  The film has much of the flavour of both The Egg and I and Mr. Blandings Builds His Dream House (the actual parallels are many, and striking), but while Ann Sheridan’s wholesome common sense puts her a few cuts below either Claudette Colbert or Myrna Loy, Benny’s bemused exasperation is certainly beyond Fred MacMurray’s range, and probably even Cary Grant’s.

It is a pity radio monopolized Jack Benny, leaving the cinema only relatively brief glimpses of his art.  He made only 20 or so pictures and most of these contained only guest or vaudevillian appearances.  But he is surely unforgettable (proof: I haven’t seen the film since 1944) as Fancourt Babberley in Charley’s Aunt, especially in drag; as that great, great Polish actor Josef Tura in To Be or Note to Be; and as the bumbling angel of The Horn Blows at Midnight, a film much underrated because of his own long ride out adversity “with the air of a martyred saint” (a quality Crowther discerned in tonight’s picture).  Long-suffering complacency he could do as well as anybody including Keaton.  His comic tribulations are as great as Garbo’s tragic ones.  And George Washington Slept Here shows him at his best in that incarnation.