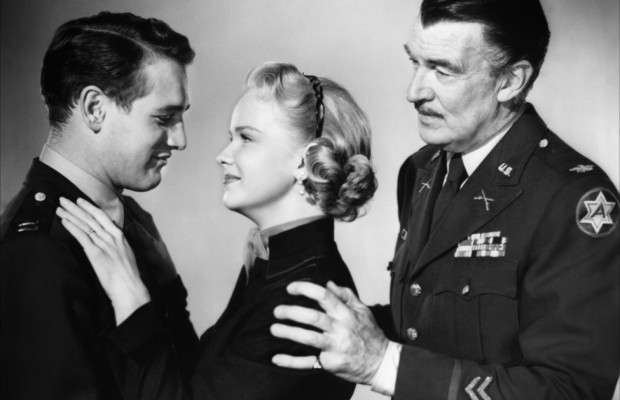 Co-star Anne Francis recalled that during filming of Forbidden Planet (1956), WALTER PIDGEON and his fellow Canadian co-star Leslie Nielsen regaled cast and crew trying to outdo each other with their vast knowledge of bawdy limericks.  But his memory for other things wasn’t so keen.  All his life, Pidgeon had a terrible memory for names–and he tended to call people “Joe” when he went blank.  For his birthday one year, the cast and crew of the picture he was working on presented him with a director’s chair fondly inscribed Joe Pidgeon.

After 21 years under contract, The Rack was Pidgeon’s last film for MGM.  He was philosophical about his career and his long-time lesser-star status: “Maybe a long glow is the best way.  At Metro I was never considered big enough to squire around Norma Shearer or Joan Crawford or Greta Garbo.  Well, I outlasted them all at MGM, didn’t I?”  He added, “It takes a lot of work to appear easy going–and I tried to avoid being stuffy.”  Pidgeon played Greer Garson’s film husband so often–seven times!–that his work without her is now largely forgotten.  But he had a very long film career, from the silent era through the 1960s.  He was a very versatile, useful performer, gifted with a strong singing voice and a flair for comedy as well as drama.  The tall, handsome actor was employed as one of star-laden MGM’s second-string stars–starring in “B” films (including his own Nick Carter detective series) but assigned supporting parts in big budget movies.

At their first meeting, MGM boss Louis B. Mayer smelled a rat when Pidgeon said he was from Saint John, New Brunswick–Mayer’s home town.  Pidgeon later recalled that “Mayer jumped to his feet and thumped on his desk.  ‘Young man,’ he shouted, ‘you can’t influence me with lies like that.  Who told you to say you came from Saint John?’  Finally I quietened him down and convinced him I really was from Saint John.  I had to tell him where half-a-dozen streets and buildings were that he remembered.  But I left his office with a contract for much more money than I expected and we were friends until the day he died.”

Pidgeon was, indeed, a Canadian.  Young Walter joined the Royal Canadian Artillery during World Wr I, but never made it overseas.  He was badly injured during training, crushed between gun carriages at Camp Petawawa, and his recuperation was complicated by pneumonia.  He spent 17 months recovering at an army hospital in Toronto; the war was over by the time he got out, so he turned his talents toward the stage.  Early in his career, he played a Mountie in the play “Rose Marie” and enthusiastically applied to actually join the RCMP.  He was rejected on medical grounds, due to his earlier injuries from the Army.  Walter returned to the stage, and branched out to appear in a few silent films and early talkie musicals.  He married happily in his 20s, to actress Edna Pickles, but was widowed when she died in childbirth in 1926.  Pidgeon’s widowed mother Hannah moved out to California to help care for the little girl, who was named after her mother.  Hannah ended up living there for 38 years, until her death at 94.  Daughter Edna grew up to work at the Animation Department of MGM before marrying in 947.  Pidgeon remarried in 1931; his second wife, Ruth, was formerly his secretary.  They were married for 53 years, until his death at 87, in 1984.  He donated his body to the U.C.L.A. Medical School in Los Angeles for teaching and research purposes.

PAUL NEWMAN was a very beguiling combination: he was both a fine Method actor and a genuine, blue-eyed dreamboat.  As he observed after decades of stardom, “I was always a character actor.  I just looked like Little Red Riding Hood.”  Yet he actually felt he had little to offer: “I had no natural gift to be anything–not an athlete, not an actor, not a writer, not a director, a painter of garden porches–not anything.  So I’ve worked really hard, because nothing ever came easily to me.”  He also joked that “I wasn’t driven to acting by an inner compulsion.  I was running away from the sporting goods business.”

He was the second son of a successful businessman.  When his father died young, Paul dutifully stepped up to run the family’s sporting goods company, only to discover he hated it.  Eager to do something else, he studied acting on the GI Bill (he’d served three years in the Navy during World War II as a radio operator), and found his future.  “Once I started taking drama classes, I asked myself why I had ever wasted so much time on a football team.”  He was very thoughtful about his craft (“Acting isn’t really a creative process, it’s an interpretative one”) but, like many actors, didn’t care to witness the end result of his work (“I really just can’t watch myself.  I see all the machinery at work and it just drives me nuts.”)  Lee Strasberg, who trained him at the Actor’s Studio, claimed Newman would have been as great an actor as Marlon Brando if only he hadn’t been so handsome–but Strasberg failed to take something else into account.  Newman had an irrepressible, impish sense of humour that set him apart from other Method actors, and it made him much more likable.  Early in his career, he was often mistaken for Brando; Newman claimed to have signed around 500 autographs reading, “Best wishes, Marlon Brando.”  But he actually had closer career ties to James Dean, as they were often both up for the same parts.  Dean’s untimely death meant Newman won the role of Rocky Graziano in Somebody Up There Likes Me (1956) and Billy the Kid in The Left Handed Gun (1958).

His 50-year second marriage was to actress Joanne Woodward, and it was a famously solid one.  Once, when asked by a reporter why he didn’t fool around with his attractive co-stars, he laughed, “Why fool around with hamburger when you have steak at home?”  It was a happy marriage despite their many differences.  He once remarked, “I’ve repeatedly said that for people as little in common as Joanne and myself, we have an uncommonly good marriage.  We are actors.  We make pictures, and that’s about all we have in common.  Maybe that’s enough.”  He also pointed out that “I never ask my wife about my flaws.  Instead, I try to get her to ignore them and concentrate on my sense of humour.  You don’t want any woman to look under the carpet, guys, because there’s lots of flaws underneath.”

He was an active liberal who scoffed at the notion that actors should abstain from sharing political opinions: ‘You can’t stop being a citizen just because you have a Screen Actors’ Guild card.”  This won him enemies, but as he pointed out, “A Man with no enemies is a man with no character.”  He said that being included on President Richard Nixon’s enemies list “was the highest single honour I’ve ever received.”

He and pal Robert Redford–his co-star in Butch Cassidy and the Sundance Kid (1969) and The Sting (1973) and a fellow race car aficionado–played a long series of elaborate pranks on each other.  Redford had a beaten-up Porsche shell delivered to Newman’s door for his 50th birthday.  Newman said nothing–but soon after, Redford found a crate of the now-melted metal delivered to his living room (so heavy that it dented the floor).  Redford quietly had the metal turned into a very ugly sculpture, and dropped into Newman’s garden.

Newman struggled to live comfortably with stardom.  He disliked giving autographs and could seem standoffish.  “I’ve been accused of being aloof.  I’m not.  I’m just wary,” he explained.  Eventually, he decided to use his celebrity for good.  As he pointed out, “You can only put away so much stuff in your closet.”  In 1982, he founded “Newman’s Own,” a very successful line of food products that has earned over $175 million, all of which went to charity.  He also started The Hole in the Wall Gang Camps, an organization for terminally ill children and their siblings.  He became as big a success in business and philanthropy as he was onscreen–“The embarrassing thing is that my salad dressing is out-grossing my films,” he joked in 1988.  He also remarked that, “Once you’ve seen your face on a bottle of salad dressing, it’s hard to take yourself seriously.”

He was nominated for nine acting Oscars over five decades, but won only once–as Best Actor, for 1986’s The Color of Money.  He found that winning after so many nominations over so many years proved to be an anticlimax: “It’s like chasing a beautiful woman for 80 years.  Finally, she relents and you say, ‘I’m terribly sorry.  I’m tired’.”