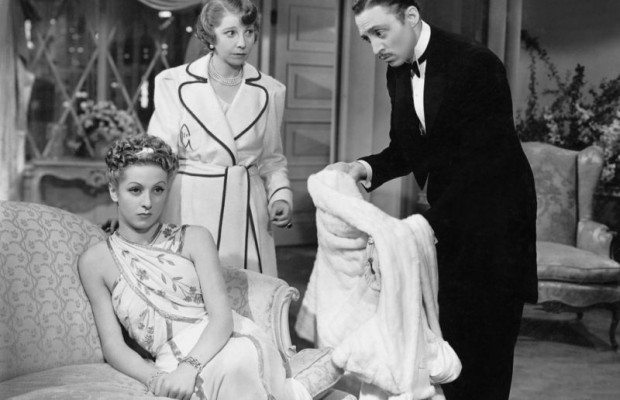 The Toronto Film Society presented The Rage of Paris on Monday, October 15, 2012 in a double bill with Wedding Present, as part of the Season 65 Monday Night Film Buffs Series, Programme 1.

Virtually overlapping my cinematic nonsense (The Joy of Living) with Irene Dunne was a surprise offer to go over to the Universal Studios in San Fernando Valley (now known as North Hollywood) to do The Rage of Paris, a light sophisticated comedy.  Although Universal was a company that then ranked on the less than distinguished side, this picture promised to be different.  It was planned to introduce the French star Danielle Darrieux to English-speaking audiences.  I had recently been much impressed by her serious performance with Charles Boyer in Mayerling—a very dramatic French film—and I thought playing opposite her would be another good feather in my cap.  Furthermore, it was to be directed by Henry Koster, a young German said to have much of Lubitsch’s superb and witty style.

The film was very amusing, light as angel food cake, and Darrieux was a delight—when left alone by her wildly jealous husband.  He, poor tortured soul, never left the set when she was working and insisted she lunch alone with him daily in her dressing room.  One day he falsely suspected her of being more cordial than necessary to “outsiders” and when lunchtime came along, he got so angry that he gave her a black eye.  We were deprived of her services for several days.  No wonder that on her return to France she left him.  I’ve always hoped she was consoled by the fact that the picture turned out well and proved very popular.

Comedies of the late 30’s were not, on the whole, a very distinguished batch.  Sandwiched in between the hard-bitten comedies of the early thirties, the crazy satires of the mid-30’s and the sophisticated Preston Sturges farces of the early 40’s, the comedies of ’38 and ’39 seemed to lack much individuality.  Most of them were routine and easily forgotten, but the mediocrity of the genre as a whole in those years caused a few really good ones to get rather lost in the shuffle; Midnight for example, and the Lubitsch-Brackett-Wilder Bluebeard’s 8th Wife, and Henry Kostar’s utterly charming The Rage of Paris.

In its own way, The Rage of Paris is very much a product of those “buffer” or “no man’s land” years.  It has all of the sparkle and elegance of Lubitsch’s Trouble in Paradise, but none of its bite.  The late 1930’s were completely Code-dominated years, so for all its implied naughtiness, The Rage of Paris is 100% pure and innocent—which could hardly be said for Trouble in Paradise.  Too, it’s a kind of last gasp for the typical depression-era Cinderella plot of the poor girl with designs on a millionaire, who fortunately discovers that she really loves him, and so winds up with true love, a hefty bank balance, and morality intact.  But though The Rage of Paris has its roots in an earlier, more cynical, period, its light-as-a-feather charm and innocence seems to fit that never-never-land of the late 30’s perfectly.  With little substance to work with, it’s no wonder that so few comedies of those years paid off.  Here the substance is no more than superficial frou-frou, but what makes it work is the deft and delightful playing and sparring of Danielle Darrieux and Douglas Fairbanks Jr., both at their best and most appealing, the easy-going and smooth direction of Henry Koster, so much at home in this kind of thing, and too often to be pushed over his head into things like The Robe, and the pleasing writing of Felix Jackson, here on the threshold of a successful Hollywood career.

From its delightful main title through eight relaxed and slick reels, The Rage of Paris is all gloss—white gowns and bathrobes, white marble décor and dinners by candlelight.  It’s amusing without ever being hilarious, and never once has to strain for effect.  Miss Darrieux, whether gowned to the hilt or dressed in oversized pajamas, clucking her tongue, innocently disrobing, performing a few conjuring tricks, is a joy throughout, and gives this kind of performance that Doiris Day would dearly love to be able to give, or perhaps fondly imagines that she is giving behind all those gauzes and filters.  The whole film in fact probably cost only a tenth as much as any of the Day/Hudson comedies, likewise from Universal—and it’s worth all of them put together.

Danielle Yvonne Marie Antoinette Darrieux (born 1 May 1917) is a French actress and singer, who has appeared in more than 110 films since 1931. She is one of France’s great movie stars and her eight-decade career is among the longest in film history.

She was born in Bordeaux, France during World War I to a physician who was serving in the French Army. Her father died when she was seven years old. Raised in Paris, she studied the cello at the Conservatoire de Musique. At 13, she won a part in the musical film Le Bal (1931). Her beauty combined with her singing and dancing ability led to numerous other offers, and the film Mayerling (1936) brought her to fame.

In 1935, Darrieux married director/screenwriter Henri Decoin, who encouraged her to try Hollywood. She signed with Universal Studios to star in The Rage of Paris (1938) opposite Douglas Fairbanks, Jr. Afterwards, she elected to return to Paris.

Under the German occupation of France during World War II, she continued to perform, a decision that was severely criticized by her compatriots. However, it is reported that her brother had been threatened with deportation by Alfred Greven, the manager of the German run film production company in occupied France, Continental. She got a divorce and then fell in love with Porfirio Rubirosa, a Dominican Republic diplomat and notorious womanizer. They married in 1942. His anti-Nazi opinions resulted in his forced residence in Germany. In exchange for Rubirosa’s freedom, Darrieux agreed to make a promotional trip in Berlin. The couple lived in Switzerland until the end of the war, and divorced in 1947. She married scriptwriter Georges Mitsikidès in 1948, and they lived together until his death in 1991.

Approaching 40, she played a supporting role in her last American film to date, United Artists‘ epic Alexander the Great (1956) starring Richard Burton and Claire Bloom. In 1961 she went to England at the request of director Lewis Gilbert to star in The Greengage Summer opposite Kenneth More. In 1963, she starred in the romantic comedy La Robe Mauve de Valentine at the Chatelet Theatre in Paris. The play was adapted from the novel by Françoise Sagan. During the 1960s she also was a concert singer.

In 1970, Darrieux replaced Katharine Hepburn in the Broadway musical, Coco, based on the life of Coco Chanel, but the play, essentially a showcase for Hepburn, soon folded without her. In 1971–72 she also appeared in the short-lived productions of Ambassador. For her long service to the motion picture industry, in 1985 she was given an Honorary César Award. She has continued to work, her career now spanning eight decades, most recently providing the voice of the protagonist’s grandmother in the animated feature, Persepolis (2007), which deals with the impact of the Iranian Islamic revolution on a girl’s life as she grows to adulthood.

She was paid homage to in Quentin Tarantino‘s ‘Inglourious Basterds‘ (2009) when Shosanna Dreyfus is preparing to take the Nazis down, her assistant calls her Danielle Darrieux.