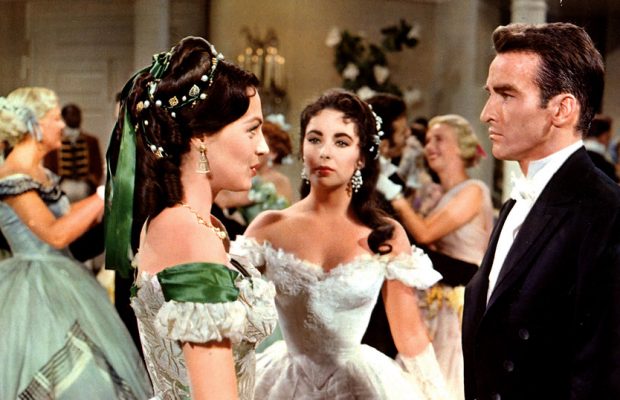 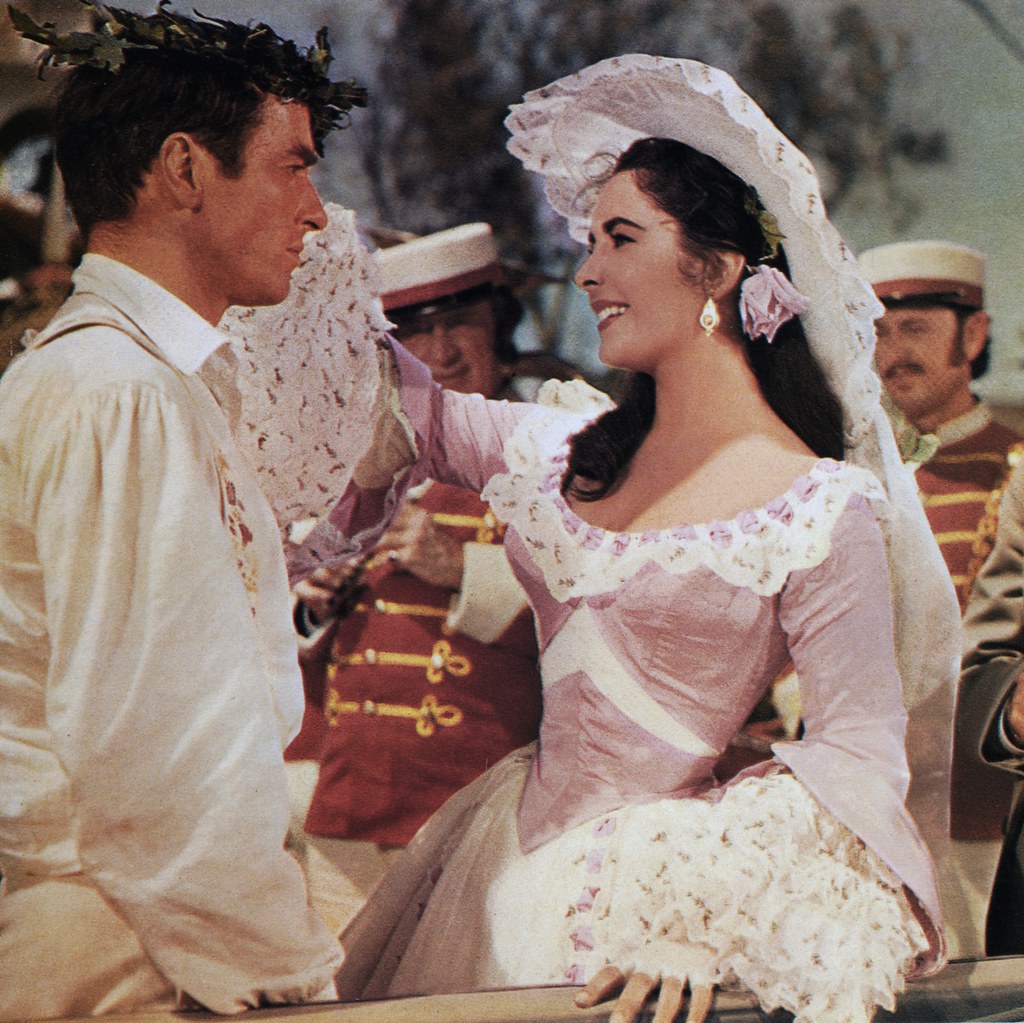 The dark-haired, hot-blooded heroine, balanced by her fair-haired, wishy-washy counterpart, and courted by (or courting) the ark and the fair heroes who express her own dualities: Hollywood has been remaking Gone With the Wind since 1939.  David O. Selznick himself tried it most notably in Duel in the Sun, with his wife-in-waiting, Jennifer Jones, as Scarlett.  And even two films by major directors, based on novels from quite outside the American tradition, King Vidor’s War and Peace and David Lean’s Doctor Zhivago, force the formidable works of Tolstoy and Boris Pasternak into something like the mold.  While it is true that the patterns go at least as far back as Sir Walter Scott, the change wrought by Gone With the Wind was to replace the dark hero as the central figure of the tale with the dark heroine, a tendency already visible in the long gallery of powerful American fictional women, exemplified especially in The Scarlet (Scarlett?) Letter.

Raintree County, of all the variations on Gone With the Wind, is the one that most closely analogizes its original, even though it telescopes both dark and fair into one single hero.  The analogy begins with the novels on which the films are based.  Margaret Mitchell and Ross Lockridge Jr. were both writers of single books, their entire life’s work.  Gone With the Wind germinated in Mitchell’s mind from adolescence until it was published in 1936, when she was in her middle thirties, to become at once one of the greatest of American bestsellers; there followed three years of publicity and ballyhoo as Hollywood transferred it to the screen.  Margaret Mitchell lived for another decade, nursing an invalid husband, and died in a traffic accident in 1949.  Lockridge laboured as long on Raintree County, which was the bestseller of 1948; Hollywood acquire the rights very quickly, but laboured over it even longer before issuing it as a film for Christmas 1957, in a production, as the New York Times acerbically noted, “outfitted with every extravagance save a script.”  Lockridge wrote no more, and depressed by a success too quickly achieved, committed suicide.  (William Leggett, in his book Ross and Tom, studies Lockridge alongside another self-destructive writer of his generation who also had one great success and no more–Tom Heggen, the author of Mister Roberts, which John Ford transformed into a major film of the 1950s).

Raintree County, moreover, deals as Gone With the Wind does, with the salient event of American history: the Civil War.  And it deals with it, though not so unequivocally (Lockridge was from Indiana, not Georgia), from the Southern point of view.  The novel, it has been pointed out, is built like a film, with the narrative often moving back through flashback, whereas the film, more like a novel, proceeds quite sequentially, beginning at the Southern college where the hero and his fair heroine are first imbued with the quest for the raintree, the symbol of the meaning of life (“or some such bilge,” as the New York Times went on).  The quest takes the hero through the rejection of the fair-haired girl, through the espousal of the dark heroine, to the War itself, where he enlists on the Union side.  When his wife flees south with their son, he runs the Southern lines to bring him back.  After the death of his wife, the quest for the raintree unties him with his first love. 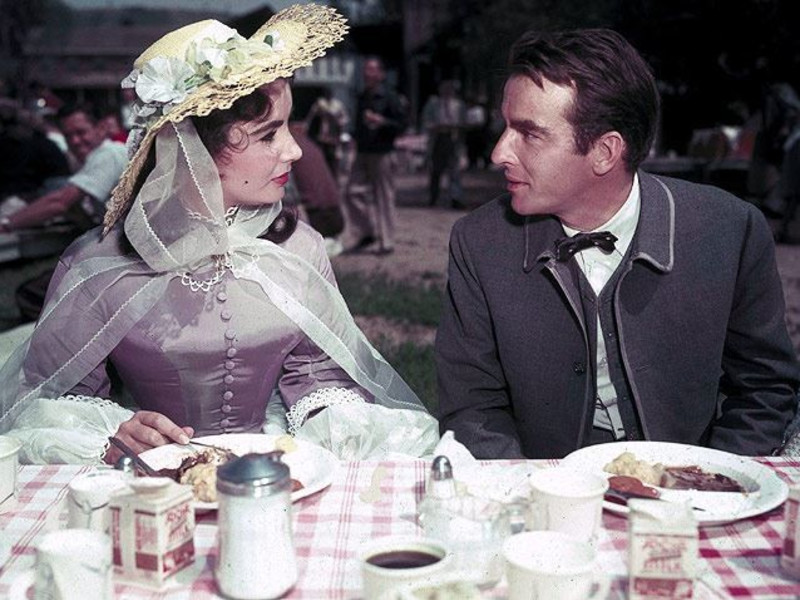 Raintree County, as film, fits into the period of cinematic elephantiasis which brought the 1950s to a close: between Marty (1955) and The Apartment (1960), the films winning the Best Picture Oscars were Around the World in 80 Days (168 minutes), The Bridge of the River Kwai (161 minutes) and Gigi (116 minutes; it seemed a lot longer), and Ben-Hur (217 minutes).  It was also the year, or within a year, of The Ten Commandments and War and Peace; and MGM, as well as Gigi and Raintree County, issued The Teahouse of the August Moon, Lust for Life, and Cat on a Hot Tin Roof.  Even the comedies and musicals were long: Don’t Go Near the Water and Les Girls both ran close to two hours.

As another such “big” picture, Raintree County draws upon the still large roster of character actors at MGM (Harry Davenport, Edna May Oliver had now given place to Walter Abel and Agnes Moorhead).  The film also has the advantage of capturing its two stars at the height of their careers: Montgomery Clift had played brooding, usually flawed and neurotic heroes in The Heiress, A Place in the Sun, From Here to Eternity; Elizabeth Taylor was still in her Michael Wilding-ethereal phase (though showing signs of passing into her Mike Todd-gross phase).  Clift suffered during the filming the injuries–in a motor accident–which permanently altered his facial appearance; ghouls may care to distinguish between scenes shot before and after the accident, which caused a nine-week hiatus in the shooting schedule.

Perhaps the best feature of this opulent and expensively produced film is its photography; its cinematographer is probably the most distinguished worker on the production.  Robert Surtees had won two Oscars (for King Solomon’s Mines and The Bad and the Beautiful), and would win one more (for Ben-Hur).  He had also photographed such moody black-and-whites as Intruder in the Dust, and such luxurious colour films as Oklahoma!, rounding out his career with some of the best-known films of the past two decades–The Graduate, The Last Picture Show, and The Sting.

The film’s weakest feature, probably, as the Times observed, is its script, which extends over three hours with very little wit and a great deal of banality–“To see the raintree is not nearly as important as what you find looking for it.”  Lloyd C. Douglas, Norman Vincent Peale, move over.  (of course, Ross Lockridge has something to answer for here, as well as Millard Kaufman, who had written the much admired script for Bad Day at Black Rock).

Raintree County seems curiously unsuited, finally, to the special talents of its director, Edward Dmytryk.  Dmytryk was one of the Hollywood Ten, but one who resumed his career somewhat earlier, through subsequent recantation.  Before HUAC, he had made a few interesting anti-Fascist (Hitler’s Children) or socially conscious (Crossfire) films; after, except for a few gens like The Sniper, or a socially conscious Western like Warlock, he made mostly big-budget sell-outs–The Caine Mutiny, The Young Lions, The Carpetbaggers.  Raintree Country belongs, chronologically and artistically, to that latter phase of his career.