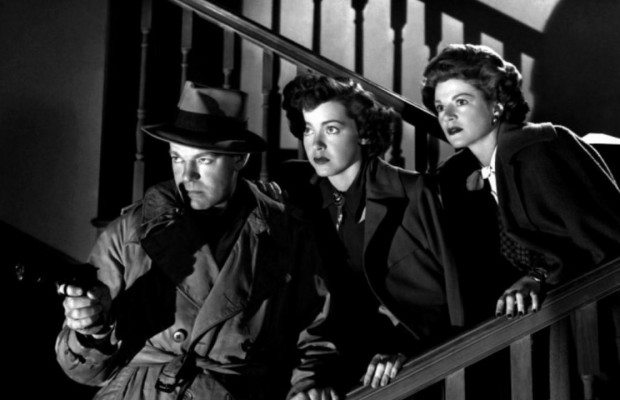 Joe Sullivan, in prison for an unspecified crime, breaks out with the help of his girl friend Pat. Neither realise that the escape has been set up by mobster Rick Coyle, who plans for Joe to be killed in the break-out to avoid having to pay him $50,000 that he owes him. Joe and Pat take refuge with Ann Martin, a social worker who has visited Joe in prison.  When one of Coyle=s men tracks Joe down and attacks him, Ann shoots the thug in the back. Joe and Pat then plan to flee the country together, but Pat learns that Ann has been kidnapped by Coyle and is being held hostage by him, and she realises that Joe and Ann are in love. When Joe tries to rescue Ann, a gunfight with Coyle ensues.

Once again the implacable Bosley Crowther was remorselessly hostile: “…this is a movie-and a pretty low-grade one, at that, in which sensations of fright and excitement are more diligently pursued than common sense…Except for the usual moral-to wit, that crime does not play-the only thing proved by this picture is that you shouldn’t switch sweethearts in mid-

lam.” Nevertheless the film was a considerable success at the box office, and, once again, Crowther’s opinion is not shared today, when the film has been called “an unheralded masterpiece because it is not only killer noir but much, much more. It is a film of extreme visceral toughness. This quality feeds and strengthens an unexpected Romantic strand which together fuse into the extraordinary emotional resonance it packs.” [Roger Westcombe in Big House Film Reviews]. Or: “When the dark stars of noir aligned, and the genre=s most gifted screenwriters, cinematographers, and directors pooled their resources-creating formidable cinematic dream teams-glittering gems like 1948’s under appreciated Raw Deal were often the result. Replete with some of the cycle’s most darkly gorgeous and painstakingly designed compositions-courtesy of master John Alton-the film is a semi-hallucinatory plunge into the murky depths of an escaped convict’s nightmarish final days-his tortured psyche reflected in the story’s shadowy, danger-charged locations.” [Review in Film Noir of the Week, September 2008].

Born Edward Vance Flanagan to Irish vaudeville artists working in the US, he joined his parents in their act while still a small child. He started in films as an extra in the 1930s, calling himself Bud Flanagan, but was renamed Dennis O’Keefe when he joined MGM in 1937. He left MGM in 1940 and worked in mostly lower budget productions usually as a tough guy in action and crime dramas. His best received role was in The Story of Dr. Wassell in 1944, and he made Raw Deal and T-Men with Anthony Mann. From the 1950s onwards he worked mostly in television.

Born in New Westminster, British Columbia, he moved to California after his parents divorced and attended a military academy for a while, though many other supposedly biographical details were apparently invented by him later, in particular when he tried to hide his homosexuality by claiming, untruthfully, that he had once had a wife and small child, both of whom

had died. He began an acting career in 1937 and had his first Broadway role in 1941, after which he became a contract player for RKO, appearing as a film noir villain in Anthony Mann’s Raw Deal (1947), followed by a similar role in Pitfall (1948). His best film performances after this were probably in A Place in the Sun (1951) and especially Rear Window (1954). His later career, however, was mostly in television, where he became famous as Erle Stanley Gardner’s Perry Mason from 1957 to 1966, for which he won two Emmy Awards, and then Ironside from 1967 to 1975, for which he also received several Emmy nominations. Later series were less successful, though he worked regularly in television and occasionally in film until shortly before his death.

Nicknamed the “Queen of film Noir” because of her many “bad girl” roles in films of this genre, she was born Claire Wemlinger in Brooklyn and studied art at Columbia University and acting at the American Academy of Dramatic Arts. She first appeared on Broadway in 1932 and then signed with Fox Film Corporation, where she made several B-features before appearing in the prestigious Dante’s Inferno in 1935 and then Dead End in 1937, both of which gained her star status. Her best known performance, and probably her best, was in Stagecoach (1939). After that she appeared mostly in thrillers such as Key Largo, Murder, My Sweet, and Born to Kill, as well as Raw Deal. From the 1950s onwards she varied her screen roles in such films as The High and the Mighty and Two Weeks in Another Town with returns to the theatre and several appearances on television. She was married three times and divorced twice; her third husband Milton Bren died in 1979 and she made few film or television appearances afterwards.

She was a singer and a model before signing for Paramount and made her first film, The Virginia Judge in 1935 at the age of 18 and worked steadily till 1949, when her liberal ideals and activities led to her being blacklisted; though she was never actually called before the House Committee on Un-American Activities; she found it difficult to find work in Hollywood

afterwards and appeared in only three films in the next eight years. Things improved slightly later on, though only in small roles for films and television, except for a larger part in Johnny Got His Gun in 1971, which was written and directed by the fellow blacklisted Dalton Trumbo. She is still active in liberal politics and humanitarian causes, however.

Born in Vancouver, he lived in New York City from the age of 18 and appeared in minor roles on Broadway over the next few years, before entering film in the mid-1940s. He was an effective supporting actor in such films as A Walk in the Sun, My Darling Clementine and Red River, had a leading role in Anthony Mann’s Railroaded! in 1947 and received an Oscar nomination for Best Supporting Actor for his performance in All the King’s Men in 1949. He continued to work in film in the 1950s, but switched mainly to television both in the United States and Britain afterwards, with only a few further film roles.

Born Johann Altmann in the Austro-Hungarian Empire, he made over one hundred films as director of photography, first in South America in the 1930s and then in Hollywood, where he was considered one of the finest cameramen in the industry, particularly noted for his work in film noirs for Anthony Mann and others. Titles include T-Men, Raw Deal, and Devil’s Doorway (all for Mann), The Big Combo, and colour films such as Slightly Scarlet and An American in Paris (for which he won an Academy Award for the ballet sequences). His book Painting with Light was very influential for later cinematographers.