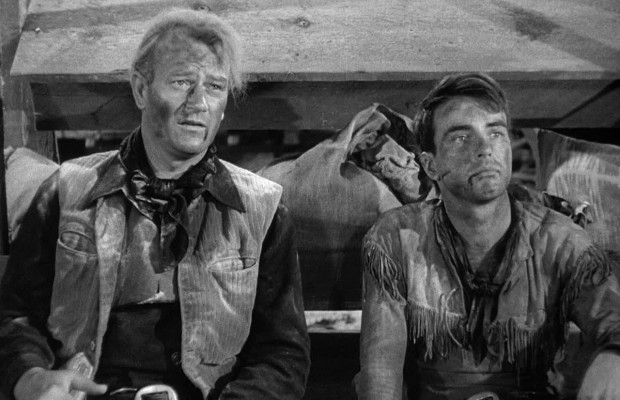 For the nine years following Stagecoach (1939), John Wayne appeared in a variety of roles that satisfied the public’s appetite for action but few of them demanded much in the way of acting acumen.  Skillfully but routinely, he walked through most of them, tending to support the fact that one of the most important but least appreciated aspects of filmmaking is a good script.  Wayne finally found a solid story and a strong director in Howard Hawks’ production of Red River.  (John Ford is of the opinion that Stagecoach made Wayne a star, but that Red River made him an actor.  Hawks has no response to this but he did tell Wayne that he wanted him to play the part of Tom Dunson, giving as his reason, “You’re gonna be an old man pretty soon, and you ought to get used to it.  And you also better start playing characters instead of that junk you’ve been playing.”)

The screenplay of Red River is basically a camouflaged tale of the founding of the famous King Ranch empire that was built up in early Texas.  It centers on Ton Dunson (Wayne) and his foster son Matthew Garth (Clift), who build a vast cattle empire after the end of the Civil War.  To market their beef, they head a massive cattle drive over the Chisholm Trail and into Kansas City.

At the time of its release, Red River was advertised as the spectacular successor to Cruze’s The Covered Wagon (1923) and Ruggles’ Cimarron (1931).  Life praised the film for being one of the rare Westerns which indicated how cowboys made their living, but work of a hazardous nature has always been central to Hawksian cinema.  What is most impressive is Hawks’ concentration on character relationships amid the swirling dust of horses and cattle.  Here the spectacle of a cattle drive is harnessed to the father-son relationship of Wayne and Clift.  Wayne is obsessed with the ordeal of driving a herd of cattle from Texas to Missouri over obstacles raised by nature, wild Indians and vengeful Jayhawkers, a bitter legacy of the Civil War which has disrupted the cattle economy on  which Wayne’s power is based.  (The Jayhawkers never appear although their reported depredations are a decisive factor in shifting the route of the cattle drive.)

Wayne’s Dunson is a virtual tyrant throughout the long grueling trek, frequently taking the law into his own hands to handle transgressors.  Clift breaks with Wayne over a oral issue influenced by tactical considerations.  Wayne is about to hang two deserters from the cattle drive when Clift usurps authority with the aid of his friends.  This aid is necessary because Clift will not draw on Wayne and Hawks will not inject a Freudian dose of parricide into a heroic genre.  hawks is also intelligent enough to provide Clift with an alternative policy  which justifies the seizure of power.  There have been rumours of a railroad extension west from Missouri to Abilene, Kansas.  Clift accepts the risk of economic failure in Abilene to avert the possibility of bloodshed and defections in Missouri.

Although well realized, historical elements are not of primary importance to Hawks, as, say, to John Ford who emphasizes the “pastness of the past” in a film like Wagon Master.  Hawks makes everything vividly present; there is very little nostalgia in Red River.  The central character-conflict partly depends on t he historical elements–the film traces the way in which Dunson’s ruthlessness, necessary for survival in the primitive conditions in which the film begins, becomes obsolete as civilization develops, so that the more liberal outlook of Matthew Garth gains him the men’s allegiance as Dunson alienates it.  But there isn’t the same organic relation between the growth-of-civilization theme and the more personal, psychological issues that one finds in the best Westerns of Anthony Mann.  Borden Chase, who part wrote Red River, wrote most of Mann’s best Westerns and doubtless the historical elements derive from him.  The psychological tensions within the leading characters of Mann’s Bend of the River very accurately mirror the social conflict between civilized values and subersive elements.  The emphasis at the end of Red River is one personal triumph rather than on the saving from starvation of the inhabitants of Abilene, on the fulfillment of a self-imposed task.

The ending of Red River has been much criticized.  Everything hinges on why Dunson doesn’t shoot at Matthew Garth at the showdown.  Joanne Dru, another of Hawks’ memorably tough women, intervenes to reconcile the two men, and although some critics objected to the girl’s decisive role in the action, her function in Red River is consistent with Hawks’ conception of women as men’s accomplices in the most violent actions.  By contrast, Ford’s women usually wave goodbye to the men of action.

Also, our sympathy, unequivocally with Dunson at the beginning of the film, has been largely transferred to Matthew; the ‘traditional’ ending would have Wayne, the tragical hero of formidable moral stature but fatally flawed, killed (though not by Clift–we are, I think, sure that Matthew won’t shoot), but achieving as he dies the clarity that enables him to judge himself and his actions, and leaving Matthew free for life.  One feels that Hawks, in rejecting this ending, broke more than the rules of the traditional Western–he broke the rules of classic tragedy as well.  None the less, if we attend properly to the film, we shall understand perfectly why Dunson doesn’t try to shoot Matthew, though that understanding depends on our awareness of the whole structure, from the opening sequence to the moment of decision–there is no one easy formulable reason for the denouement but a whole complex of connected reasons.

Red River is a magnificent horse opera, filmed in grandiose style by Hawks.  The resilience and camaraderie of rough-hewn men under stress (a favourite theme of Hawks’) is conveyed by a well-chosen cast.  The film is also aided by an appropriately driving and forceful score by Dimitri Tiomkin and by the stark, exquisitely crafted photography of Russell Harlan.  Hawks, who likes to augment his work with comedy when ever the occasion permits, offsets the violence in the film by unleashing Walter Brennan in his most characteristic style as an earthy, toothless varmint.  Montgomery Clift is fine; angular, tense and audacious–a performance equal to, of not in some ways better than, Wayne’s own solid characterization.

Many critics consider Red River the best Western film of the forties and it remains a highly regarded Western drama, which seems to gain stature over the years, especially when one remembers it was an early attempt by Hawks at handling the genre.  As was the case with Stagecoach almost a decade earlier, Red River reawakened a floundering interest in the Western.