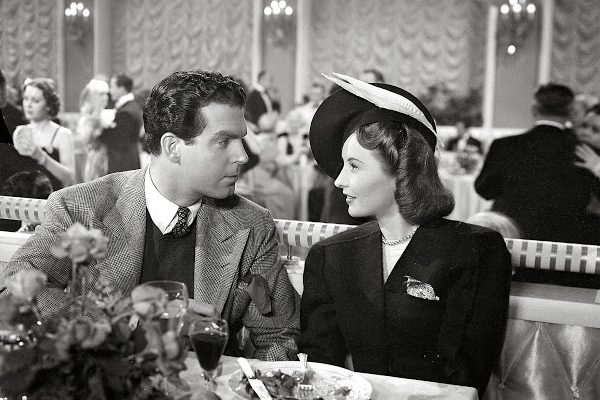 Toronto Film Society presented Remember the Night (1940) on Monday, December 8, 1986 in a double bill with Stolen Harmony as part of the Season 39 Monday Evening Film Buffs Series “B”, Programme 4.

Remember the Night is one of those rare blends of script, cast and director that can do no wrong.  Director/producer Mitchell Leisen shaped Preston Sturges’ script into a moving personal statement which the New York Times called “The real curtain-raiser for 1940.”  The Times went on to say: “Perhaps this is a bit too early in the season to be talking of the best pictures of 1940; it is not too early to say that Paramount’s nomination is worth considering.”  As it turned out, it was too early in the season to be talking best picture of 1940, and Remember the Night did not make the Times‘ best 10 list for that year.  For the record, the ten that did make it were: The Grapes of Wrath, The Baker’s Wife, Rebecca, Our Town, The Mortal Storm, Pride and Prejudice, The Great McGinty, The Long Voyage Home, The Great Dictator, and Fantasia.

Nevertheless, Remember the Night is so finely balanced and understated, so warm and real, that it is always a joy to watch.  The plot has Assistant D.A. Fred MacMurray’s Christmas visit with his family threatened by the need to prosecute a last-minute case.  He manages to get the case–that of shoplifter Stanwyck–postponed, and bails her out.  Finding that she is from Indiana too, he offers to drop her off to see her mother on his drive home.  The mother–who is responsible for Stanwyck’s inability to go straight–rejects her, and he takes her home with him.  There, Stanwyck is exposed to a way of life that changes her outlook. 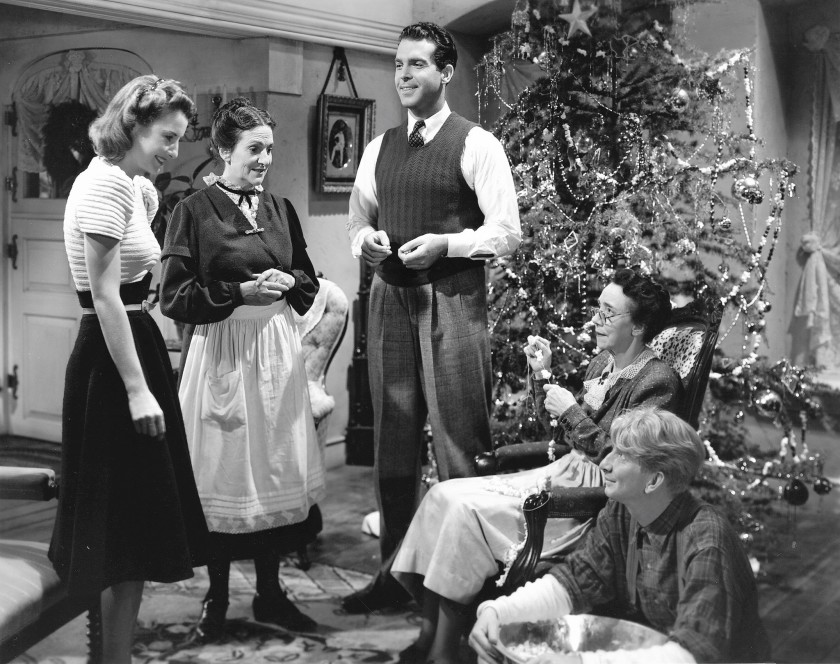 The Christmas scene which shows Stanwyck some real people is typical of what the film achieves.  Beulah Bondi, Elizabeth Patterson and Sterling Holloway represent more than life on a farm, or a quaint contrast to the city life Stanwyck has known.  When she plays the piano as they listen to Holloway sing “The End of a Perfect Day”, the camera focuses on contentment that could be found anywhere that people appreciate each other.

Stanwyck’s performance is one of her finest.  Lee Leander is a mixture of wit, intelligence and sensitivity–which Stanwyck puts across with the same.  Director Mitchell Leisen loved working with Stanwyck.  He later said: “I have great admiration for Stany.  She is a tremendous professional, a woman of unlimited ability and, with Carole Lombard, is the easiest woman I ever worked with.”  Prior to this, Leisen had made Midnight with Claudette Colbert.  While Colbert was lovely to work with, she was very fussy about how she was photographed.  Sets sometimes had to be rebuilt in order to present her at her best angle.  This, and other requirements of his star, made Midnight–budgeted at 44 days–take 47 days to shoot.  Leisen expected he would do Remember the Night a little fast but–because its script was longer–he planned on a schedule similar to that of Midnight.  He soon found, however, that Stanwyck liked to work as rapidly as possible.  She would let them shoot her from any angle that could be set up quickly.  This, and the fact that she was perfect on the first take, imparted a speed to the proceedings that became contagious.  Everyone picked it up and, in the end, Remember the Night‘s average number of pages shot per day came out to 4 1/2– or the fastest Leisen ever shot anything in his whole career.  The 42-day schedul was reduced to 34, saving over $50,000.  (Big bucks in 1939).