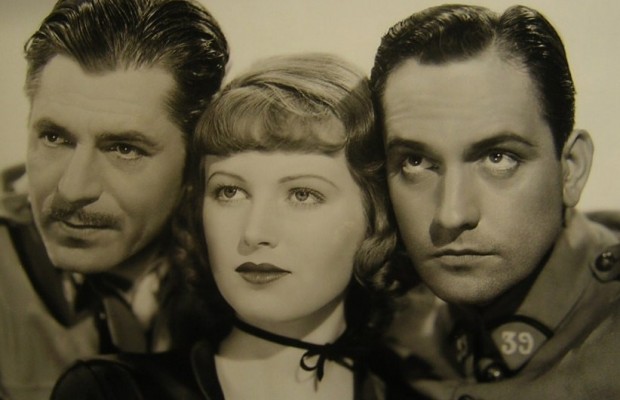 Toronto Film Society presented The Road to Glory (1936) on Monday, December 16, 1974 in a double bill with What Price Hollywood? as part of the Season 27 Monday Evening Film Buff Series, Programme 2.

Howard Hawks (b. May 30, 1896), the most typically ‘American’ of all film directors, has made films in many genres, with his pictures being in many cases among the leading examples of the genre.  His comedies, particularly His Girl Friday (1940), Twentieth Century (1934) and Bringing Up Baby (1938), are as fresh and wacky today as when originally made.  Red River (1948), Rio Bravo (1959) and The Big Sky (1952) are the only Westerns that come close to the John Ford masterworks in lyricism, magnitude and emotion.  Scarface (1932) is possibly the best gangster picture ever made, and The Big Sleep (1946) approaches it in the film noir genre.  Only Angels Have Wings (1939), Ceiling Zero (1936) and The Crowd Roars (1932) are excellent adventure films, fulfilling Hawks’ theory that the best kind of drama is that in which a man is in danger, with life or death in the balance.  And the war films, The Dawn Patrol (1930), Air Force (1943), The Road to Glory and Sergeant York (1941) combine this thrill of danger with another favourite Hawks motif, that of the interaction of men in a group.  Considering this impressive filmography–with most of his sound films being extremely profitable financially–it is amazing to realize that Hawks has never won a Best Director award from either the Academy Awards or the New York Film Critics, and has only been nominated once, as I recall, for an Oscar, for Sergeant York.

Hawk’ style, both narratively and cinematically, is perhaps the least stylized or pretentious of any great director, with the possible exception of Buster Keaton.  Lighting, camerawork, dramatic time and acting are ultra-professional, though never slick; moreover, they are always at the service of the storytelling.  It is in this storytelling–blended with penetrating characterizations–that Hawks has no peer.  The Road to Glory, a tale concerning a doomed French regiment in WWI, is a slight departure from the norm for Hawks.  The mixture of anti-war propaganda with glories of regimental tradition are ingredients more familiar and peculiar to Ford [Pilgrimage (1933), They Were Expendable (1945), the Civil War segment of How the West Was Won (1963) and many of Ford`s Westerns, than Hawks.