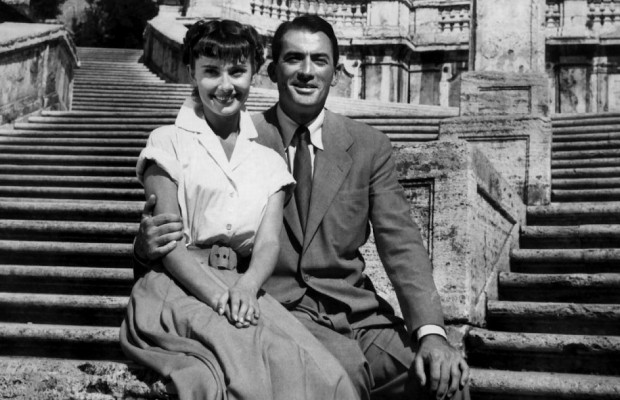 Toronto Film Society presented Roman Holiday (1953) on Sunday, April 12, 1981 in a double bill with One Night of Love as part of the Season 33 Sunday Afternoon Film Buff Series, Programme 9.

This royal lark was the first feature Wyler made outside the United States, the first time he tore himself loose from studio stages, the first out-and-out comedy since The Gay Deception, a film that made his unknown actress an overnight sensation and brought out all the adjectives–elfin, exquisite, ravishing, moving, wistful.  “The newcomer, named Audrey Hepburn, gives the popular old romantic nonsense a reality it has seldom had before,” Time wrote in a cover story.  “Amid the rhinestone glitter of Roman Holiday‘s makebelieve, Paramount’s new star sparkles and glows with the fire of a finely cut diamond.  Impertinence, hauteur, sudden repentance, happiness, rebellion and fatigue supplant each other with lightning speed on her mobile face.”

Wyler got Audrey Hepburn because the signing of Gregory Peck satisfied Paramount’s demands for a star with marquee value.  At first, Peck turned it down.  The girl in the script obviously had the starring part.

“You surprise me,” Wyler told Peck.  “If you didn’t like the story, okay, but because somebody else’s part is a little better than yours, well, that’s no reason to turn down a film.  I didn’t think you were the kind of actor who measures the size of the roles.  That did it.  Peck signed.

“According to Hollywood mathematics, now that I had a ale star, I didn’t need a stellar leading lady.  I wanted a girl without an American accent to play the princess, someone you could believe was brought up as a princess.  That was the main requirement: besides acting, looks, and personality.”

Wyler looked around London and interviewed several girls.  One was the stick-slim Audrey, a Brussels-born dancer (of Dutch mother and English-Irish father) who had played the cigarette girl in the opening scene of Charles Chrichton’s Lavender Hill Mob and, while acting in Jean Boyer’s Nous Irons a Monte-Carlo in Paris, had been chosen by Colette herself to play the title role in the future Broadway musicalization of Gigi.  Leaving for Rome, Wyler ordered a test of the twenty-three year old Audrey, telling the British test director to play a trick on her and to keep the camera rolling after she played her little scene and he called “cut” so that Wyler could see her natural self when not acting.  “That was the film we received in Rome,” Wyler recalled.  “She was absolutely delightful.  First, she played the scene from the script, then you heard someone yell ‘Cut!’ but the take continued.  She jumped up in bed relaxed now, and asked, ‘How was it?  Was I any good?’  She looked and saw that everybody was so quiet and that the lights were still on.  Suddenly, she realized the camera was still running and we got that reaction too.  Acting, looks, and personality!  She was absolutely enchanting and we said, ‘That’s the girl!’  The test became sort of famous and was once shown on TV.”

Shooting in Rome was a delight and Wyler loved his new freedom.  No sets, no back transparencies, nothing of the style of “Hollywood romance.”  Since newspaperman Peck is anxious to get the exclusive rights to the princess’s adventures in Rome and since he is also anxious to keep her in the dark as to his own identity, a Cook’s tour of the Eternal City was practically built into the story–a motor-scooter ride through streets, alleys, and marketplaces, a dance on Tiber river barge, sidewalk cafés, the Pantheon, the Forum, and such landmarks as the Castel Sant’ Angelo, Bracacci, Barberini Palazzo and the Spanish Steps.  Wyler had only one regret–that he thought of color too late.  “I tried to switch, but in those days, making pictures in color was unusual.  I would have needed new filmstock, had to fly exposed film every day to London, and reorganize the production.  It was just too late.”

Journalists and paparazzi swarmed over the locations and Peck fell in love with a French reporter, Veronique Passini.  Since he was still married, it had to be kept halfway secret and elaborate plots were hatched.  Once, the lovers and the Wylers had lunch on an island in the middle of a lake outside Rome.  They had been told they would be alone, but paparazzi photographers soon came out of the bushes.  A year later, Veronique became the second Mrs. Peck.