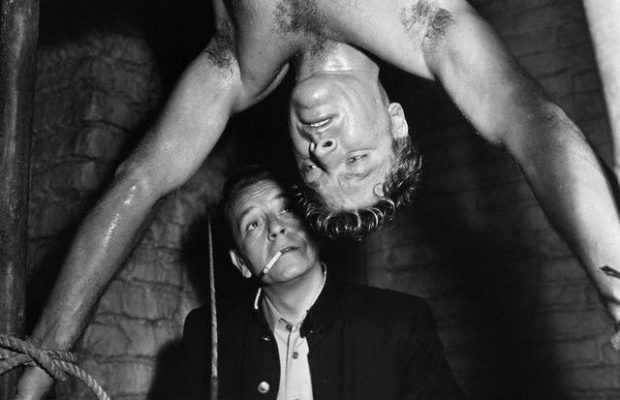 Toronto Film Society presented Rope of Sand (1949) on Monday, August 27, 2018 in a double bill with The Threat as part of the Season 71 Summer Series, Programme 7.

Producer Hal Wallis, hoping to recreate some of the feel and box office success of their previous collaboration, Casablanca, hired co-stars Claude Rains, Peter Lorre and Paul Henreid for Rope of Sand.  Set in the diamond-mining district of Africa and directed by William Dieterle, a veteran of many gentler films, Rope of Sand had a sexy earthiness and a nasty streak that caused problems with the Johnston Office, the Hollywood censors of the day.

Walter Doniger, who wrote the story and the screenplay for Rope of Sand, developed the character of Toady with Peter Lorre in mind, at the same time grasping on an unconscious level for a “reflection of the actor’s life, a victim in and of the film world.”  Because of his “situation as an émigré,” claimed Doniger, Lorre was able to “reach this character, who belongs nowhere and who recognized that morality is a fraud perpetrated on the society in which the only morality is survival.”

After the preview, Wallis was ecstatic; he had a hit.  Doniger was less than enthusiastic.   He believed Lancaster and Corinne Calvet were miscast and that the director, though a fine technician, did not understand the story or have any concept of how to handle actors.  He remarked that “They all acted out of control.  I was furious because, part truth, part writer frustration over director’s lack of understanding of the underlying elements, I felt Dieterle had missed the sociological and character point of the film.”

Nevertheless, conceded Doniger, Wallis was right, “because the film was an enormous hit and made more money for his company than any picture up to that time.”  Rope of Sand won critical recognition in its day and Peter Lorre, in his several brief scenes, once again held the screen beyond his time, “standing out…as a philosopher who is not beneath a bit of deceit if it fattens his wallet.”

French actress Corinne Calvet spent 18 months in Hollywood without landing a role during her time as a Paramount and MGM contact actress and was ready to leave just before signing with Wallis.  Born Corinne Dibos, her mother was a scientist who played a part in the development of Pyrex glass.  Corinne was one of the names which appeared in the Photoplay magazine feature ‘Choose Your Star.’  The magazine asked the public to send in their votes as to who they thought would be one of the future stars of the silver screen.  When the results appeared in the November 1949 issue, Calvet landed in the 10th spot on the actress list.  During that year, Calvet made an appearance at the Toronto CNE and Herbert Whitaker wrote in what is now The Globe and Mail under his ‘Show Business’ column his take on her, “[I was] happy [I] met her before seeing her picture.  She’s a very attractive young lady, just ripe for a career as an important screen siren.  But she’ll have to do better in the acting line.  Much better.”  After seeing the film, you can make up your own minds what you think of Corrine Calvet.

I had the opportunity to meet both Paul Henreid’s and Claude Rains’ daughters at a festival celebrating the 75th anniversary of Casablanca.  When I spoke with Monika Henreid about her father’s role in Rope of Sand, she said that his audience was very displeased with him playing such a dastardly character and that he lost out on other roles because of it.   Personally, I rather like him in nastier roles such as this, Night Train to Munich and the crook more than the doctor when he played both roles in Hollow Triumph.

Interestingly, although Claude Rains and Paul Henreid played in quite a number of films together (along with Peter Lorre and Humphrey Bogart), we were told by both daughters that their fathers disliked each other immensely.

No matter, regardless of all the negative remarks, I think you will all enjoy what goes on in Rope of Sand.

Sourced from Burt Lancaster by Tony Thomas (1975); Burt Lancaster: Hollywood’s Most Enduring Star by Robert Windeler (1984); The Lost One: A Life of Peter Lorre by Stephen D. Youngkin (2005); Wikipedia 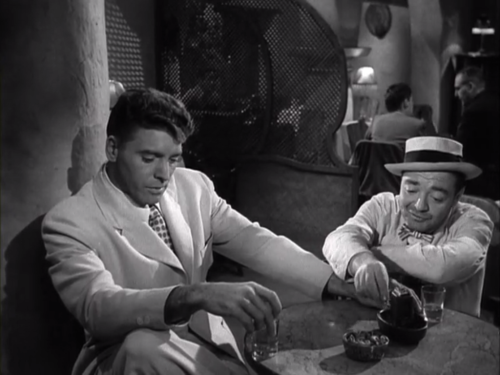 This film is sometimes referred to as “the poor man’s Casablanca.” Screenwriter Walter Doniger penned the script in the hope that Casablanca producer Hal Wallis would re-pair Humphrey Bogart and Ingrid Bergman as the leads in another tale featuring an expatriate American in Africa, but ultimately only Claude Rains, Paul Henreid, and Peter Lorre would return from the 1942 classic. As Minty Clinch writes: “The result is a pale shadow, for Lancaster is no Bogart and Corinne Calvet is no Bergman. Worse still, the dialogue is in the kindergarten class. Nor did William Dieterle’s direction ever rise above routine rock bottom.” Burt Lancaster, whose “massive self-confidence was such that he regularly argued with film-makers more experienced than he,” butted heads with Doniger and his writing so often during filming that he had the following to say about it in a 1984 interview: “When I think of my least favorite, I think of Rope of Sand. I did that thing under great duress. I hated it.” Doniger would be nominated for a Golden Globe Award for his script, however, and the film proved to be Lancaster’s second most popular film of the 1940s, behind another Wallis picture, Sorry, Wrong Number (1948).