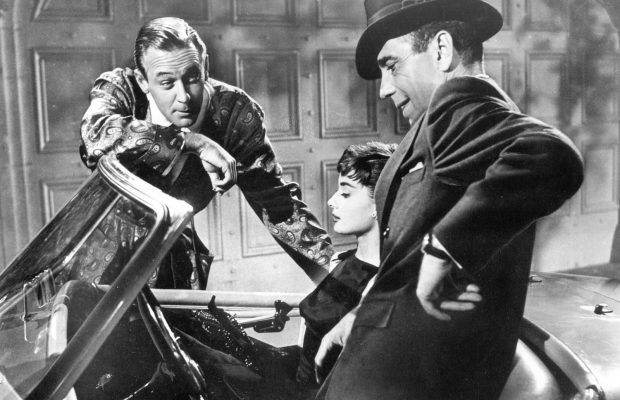 Billy Wilder in 1954 was turning away from his dark, uneasy masterpieces of the previous decade (Double Indemnity, A Foreign Affair, Sunset Boulevard), and pointing towards his more salubrious comedies of the next five years (The Seven Year Itch, Some Like It Hot).  Sabrina is his most charming film, the one in which he comes closest to telling a fairy tale.  The films Wilder had made with other directors were often Märchen–Hawk’s Ball of Fire, and the remake A Song is Born, versions of Snow White, Lubitsch’s Bluebeard’s Eighth Wife and Ninotchka, Mitchell Leisen’s Midnight, a version of Cinderella.  But none of these quite maintained the fairy-tale tone as well as the structure throughout.  Like his master Lubitsch, Wilder customarily introduces his films with a narrative voice, via either a written title or the voice itself over; here it actually begins, “Once upon a time,” and invokes a world of charm and ease where everyone has his place on a preordained chain of being, down to the goldfish called George.  The bridge from this graceful illusion to the only slightly more harsh reality of the film is made through the memorable vertical pan downward from the painting of the Larrabee family to the family itself, older, but in the very same poses: the dignified but still skittish Oliver, the matriarchal Maude, the solid, stolid Linus, the playboy David–all characterized by simultaneous word and image.  But the basic fairy-tale quality remains unchanged, for what could be more romantic (even if “Isn’t It Romantic” were not there to remind us) than the scenes in the indoor tennis court, with Bogart’s feet approaching the waiting heroine: the prince disguised as the prime minister disguised as the prince.  A world where sexuality is no more than the dropping of a tennis net, and where life is seen through tinted glasses, in Paris as in Long Island–La Vie en Rose.

Sabrina is a fairy tale where the ugly duckling turns into a swan, where the princess transforms a frog into a prince through her love, and where, with a Wilderian turn of the screw, Cinderella finds her prince not by fitting herself to a glass slipper, but by fitting a fedora to him.  Indeed, the film is much concerned with hats, using them as indices of growth or regression, or both: from the Paris hat Sabrina wears on her return from Europe, to David’s natty Panama and Linus’s college beanie, to the crucial fadeout moment; they are also badges of a rigid class system, like the Baron’s soft felt, or Fairchild’s chauffeur’s-cap.  All this finds its justification in a world (to borrow another analogy the film uses) of comic operetta, a genre rich in costume and fancy headgear.  It seems wholly appropriate that the King and Queen of Greece visited the set during the shooting, and were forthwith ensconced on studio thrones, with red-carpet runners.

To play his fairy-tale characters, Wilder chose suitable icons.  For the Princess, Audrey Hepburn, who had just played such a one in her last film, Wyler’s Roman Holiday.  For the False Prince Charming, William Holden, who had just played the playboy in The Moon Is Blue, and still carried with him the charming irresponsibility he had created for Wilder in Sunset Boulevard and Stalag 17.  For the False Princess, the epitome of blonde vacuity, that Grace Kelly manque, Martha Hyer.  For the Old Kinds, the marvellous Shakespearian Walter Hampden, and that no less marvellous hero-villain of the silents, Francis X. Bushman.  For the Old King Disguised as Woodcutter, John Williams, the kindly but persistent dispenser of justice of Dial M For Murder.  For the Fairy Godmother, that little gnome of Jean Renoir’s, Dalio.

Only the True Prince Charming presented problems.  The part of Linus was intended for Cary Grant, who was unavailable.  That Bogart felt himself to be second choice helped to make the relations between star and director the most explosive of Wilder’s career before his two pictures with Marilyn Monroe.  Bogart referred to the film as “a crock of crap” (or “shit”–quotations of the remark vary, but the alliterative version is perhaps to be preferred), and to the director (actually a Jew), as “that Nazi.”  Wilder’s characterization of Bogart as “a bore” (“You have to be much wittier to be mean”) was one of his milder statements on the actor.  Nonetheless, Bogart as Linus is one of the real pleasures of the film, after one has thought one’s way through the icon.  His sardonic playing (as Linus) from behind the lover’s persona is wonderfully balanced, especially in the boat scene where he introduces “Yes, We Have No Bananas” to the girl too young to remember it; the change from feigned lover to true lover is so subtly managed that one cannot identify the moment where it occurs.  Is he serious when he tells her of his lost love of long ago, or is he still feigning?  Is this Joe College with or without a touch of arthritis?

In adapting Samuel Taylor’s stage success to the screen, Wilder rewrote extensively, shifting the emphasis from the democratic idealism of the play (Ever poor girl can marry her millionaire) to a more genial acceptance of aristocratic, or plutocratic, values.  But unlike his next film, The Seven Year Itch, where the camera remains rather set-bound, save in the fantasy sequences, Sabrina is insistently cinematic, whether in the tracking towards the mansion in the narrative opening, in the montage of Sabrina’s stay in Paris, or of Linus’s courtship.

If Wilder’s openings are usually narrative, reminding us that he is telling us a “story,” it is noteworthy that many of his best films end in a journey begun, often by sea or air, as if the only way the characters can live happily ever after were by leaving earthbound things behind them.  As the great liner leaves the docks of New York, the fairy tale continues.

WITH IMPECCABLE, IF MACABRE, TIMING, TORONTO FILM SOCIETY DEDICATES THIS AFTERNOON’S PRESENTATION TO WILLIAM HOLDEN, THE SECOND MALE LEAD OF BOTH FILMS, WHO DIED THIS PAST WEEK