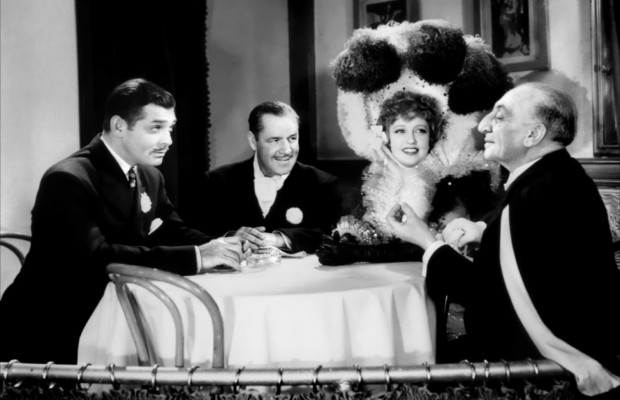 During the Great Depression of the 1930s there was at least one place in America where everyone kept smiling.  That place was Hollywood, where the film industry was busily producing entertainments to keep peoples’ minds off their troubles. But entertainment doesn’t necessarily consist of musical comedy.  Depression audiences were also enjoying such stimulating fare as The Last Days of Pompeii, Deluge, Hurricane, The Tidal Wave, The Rains Came, and, tonight’s film San Francisco.  It seems that when times are bad people suddenly become willing to pay money to see other people in even worse situations.  One of the best “disaster” films (not in the critical sense), is San Francisco, which contains one of the most spectacular earthquake sequences in movie history.  Filming the earthquake involved 400 extras who were required, in one scene, to stand on balconies that were designed to come crashing down at the press of a button.  Apparently, the entire set actually shook back and forth, shifting as much as three feet laterally in an accurate pattern of destruction modelled on a real earthquake.

MGM’s research department did a fine job of recreating 1906 San Francisco both before and after the earthquake.  Studio bosses dictated that all destruction in the film had to be honest depictions of the property destroyed, or the company could be faced with ruinous libel suits.  Since all records were lost in the quake, the task was doubly difficult.  Some of the locations constructed for the epic were the Barbary Coast’s Paradise Café, an old Grand Opera House, the Poodle Dog Restaurant, the Palace Hotel which then housed the New York Metropolitan Opera Company, Schutzer Park, Cliff House, Lyric Hill and the Grenable Hotel.

The script for San Francisco originated in a story by Robert Hopkins, a former silent screen title writer and a member, along with Anita Loos, of the MGM writing staff.  He brought it to the attention of Jeanette MacDonald, feeling it would be perfect for her and Clark Gable.  She was impressed, and it was referred to Studio boss Irving Thalberg who enthusiastically endorsed it.  Hopkins and Loos were asked to go ahead and fashion a film script.  Before production could get underway, Thalberg became ill (he died in September, 1936) and Louis B. Mayer assigned Bernard Hyman to the project.  Anita Loos has described Hyman as “a victim of the special Hollywood naivete that’s incapable of recognizing bad taste, most of all his own.”  As a native San Franciscan she was also not very pleased with what she felt was the director’s rather heavy-handed treatment of the subtleties of the San Francisco tenderloin.  However, as a veteran of two Jeanette MacDonald films and several Gable-starring vehicles, Woody Van Dyke was the kind of tough director Gable was partial to, and a proven talent as far as Jeanette MacDonald was concerned.  He was also well known for bringing his pictures in on time–they didn’t call him “One Take Woody” for nothing.

Originally, the studio waned Jeanette MacDonald to be the big name in the epic, but she realized it was the story that counted, and pushed for Gable as her leading man, even though he didn’t want to make the film.  He had just finished Mutiny on the Bounty and was looking forward to a well-deserved vacation.  Also, he assumed it was to be a musical and wasn’t interested in being upstaged by a prima donna.  However, he hadn’t counted on Jeanette’s persistence.  She got him to read the script which he loved.  When he learned that she had given up a chance to make another film in order to do this movie with him, he was impressed.  This was a large sacrifice on her part, since she was on a per-picture contract.  When she promised that she would not sing in any scene shared with him, unless he so desired, he was more impressed.  He was finally convinced when she hounded the casting office to assign Spencer Tracy the role of Father Tim.  Both Gable and Tracy admired and respected each other.

The production and settings are on a truly colossal scale.  As noted, the reconstruction and period atmosphere of San Francisco are convincing and the earthquake, in some details bigger and better than the original, is terrific.  The emotional effect of this sequence is as great s the spectacle itself.  Van Dyke handles the immense and varied materials set before him most effectively.  His skill is equally to be seen in the telescoped version of Faust, in the crowd scenes at the beginning and the end, in the fury of the earthquake and the uncanny quietness afterwards, and even in the longish moralizings of Father Mullins and Mrs. Burley.  As the people of San Francisco march forward to build a new and better city and the skyscrapers of the modern city (for 1936) rise on the screen one cannot help thinking that, if natural convulsions are as connected with human behaviour as the film suggests, San Francisco, and many another city, may be due for an earthquake tomorrow.