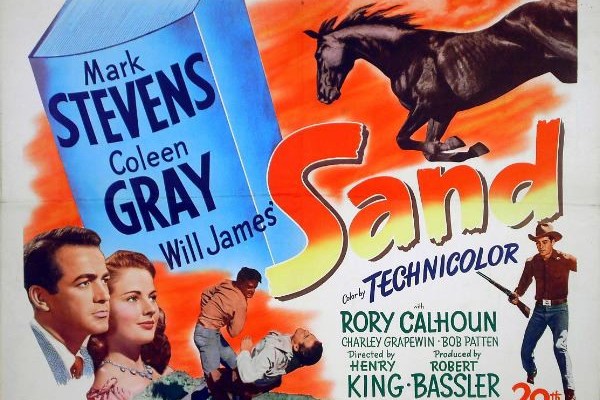 Toronto Film Society presented Sand on Sunday, November 30, 1980 in a double bill with The Yearling as part of the Season 33 Sunday Afternoon Film Buff Series, Programme 4.

Technicolor equine melodrama, with a conventional “triangle” overlay.  From the same successful stable as Smoky, it tells how a wealthy young horse breeder wins a pretty girl from her old grandfather’s foreman while rounding up a show stallion.  It covers its not unfamiliar course at least twice but agreeable characterization and magnificent scenery, superbly photographed, prevent any flagging of interest. As refreshing and invigorating as a holiday in the country, it should delight all types of audiences.

Coleen Gray doesn’t have to do much acting, but she makes an ideal outdoor girl as Joan, Mark Stevens is an engaging and manly Jeff, and Rory Calhoun has no difficulty in fitting his part as the quick-tempered Chick.  The supporting types are no less convincing.

The love story is little more than a reiteration of the obvious and the number of times Jubilee manages to elude his pursuers is nobody’s business, but the romantic and equine interests are flogged in such congenial and breathtaking surroundings–no finer scenery has been seen on the screen–that every foot of the film is a joy and a sight for sore eyes.  Some may label it kids’ stuff, but thank heaven we haven’t grown up!