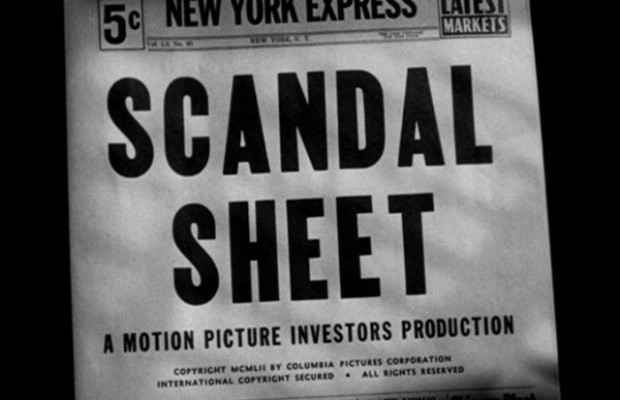 Toronto Film Society presented Scandal Sheet (1952) on Monday, August 18, 2014 in a double bill with While the City Sleeps as part of the Season 67 Summer Series, Programme 6.

Newspaper man Mark Chapman takes over an ailing New York newspaper and revives it as a scandal sheet by staging a number of publicity stunts. Chapman’s wife, whom he abandoned years ago, resurfaces and threatens to blackmail him. He kills her accidentally and tries to cover it up. Meanwhile the paper’s star reporter, Steve McCleary, begins to investigate the unsolved murder. As McCleary and feature writer Julie Allison dig deeper, the noose begins to tighten round Chapman’s neck, resulting in his committing another murder to protect himself.

Film rights to Sam Fuller’s novel (see notes for Shock Corridor for more on Fuller) were sold to Howard Hawks during the war, and Fuller later did a treatment, but Hawks hired Sidney Buchman to write the script and then sold this on to another producer for a sum far in excess of what Fuller had originally been paid.

Bosley Crowther in the New York Times didn’t think much of the film: “The ruthlessness of tabloid journalism…is given another demonstration in Columbia’s Scandal Sheet, a run-of -the-press melodrama which came to the Paramount yesterday. But apart from a bit of tough discussion of the public’s avid taste for thrills and chills and a few dubious hints at tabloid techniques, there is nothing very shocking in this film.” A more recent critic, Dennis Schwartz is more positive, calling it “a hard-hitting noir thriller”, and praising Burnett Guffey’s camerawork: “[His] splashy black-and-white photography[is] filled with New York City atmosphere and the whirlwind energy buzzing around a press room.”

Born William Broderick Crawford to parents who were both vaudeville performers, he joined his parents on stage at an early age and, after working as a stevedore on the New York docks, he returned to the stage, and took the role of Lenny in Of Mice and Men on Broadway. He then moved to Hollywood and, after appearing mostly in “B” films,  had great success as the politician Willie Stark in All the Kings Men in 1949, for which he won the Academy Award for best actor. Future roles, however, tended to typecast him as a violent character with criminal tendencies. He worked for a time in Italy, appearing in Federico Fellini’s Il Bidone in 1955, and then was given the lead role in the television police drama Highway Patrol, which was a huge success and led to both television and film work in the 1960s and up till 1982. He was a heavy drinker for most of his adult life, as well as consistently over-eating, a combination that finally led to a series of strokes and his death in 1986.

Born Derek Delevan Harris to parents who were both actors, his good looks soon attracted attention in the film world and Humphrey Bogart renamed him John Derek and secured him a role in Nicholas Ray’s Knock on Any Door in 1949. This was followed by a supporting role in 1949 as Willie Stark’s son in All the King’s Men. Some leading roles followed, but mostly in second rate “B” movies, and he then turned to film directing, but with only mod moderate success.  He was married four times; his last wife was the actress Bo Derek.

Best known for her role as Mary Bailey (James Stewart’s wife) in It’s a Wonderful Life, she won an Academy Award for best supporting actress in 1953 for From Here to Eternity. Later she worked mostly in television, and starred in her own show, The Donna Reed Show for several years, as well as appearing in Dallas and various other series. Her typical role in her own show was as a small town housewife and a loving wife and mother and she responded to feminist criticism of this by stating that: “I played a strong woman who could manage her family. That was offensive to a lot of people.” Originally a registered Republican, she became a peace activist during the Vietnam War, following the example of her son Tony, and co-chaired an anti-war advocacy group. In the 1968 presidential election, she supported the Democratic candidate Eugene McCarthy.

He studied painting and law and got into the film industry working as a prop man while still a law student. After working in a variety of jobs, including assistant director, he made his debut as director of low-budget films in 1944, then turned out a string of violent and realistic crime thrillers in the 1950s, such as The Phenix City Story in 1955. His greatest success in the 1960s was Walking Tall (1969), the fact-based story of a crusading sheriff fighting corruption in a Tennessee county.

A prolific and highly regarded director of photography who shot over twenty films noir in the 1940s, including My Name is Julia Ross, In a Lonely Place, Knock on Any Door, and The Reckless Moment. He won Academy Awards for From Here to Eternity (1954) and Bonnie and Clyde (1968).