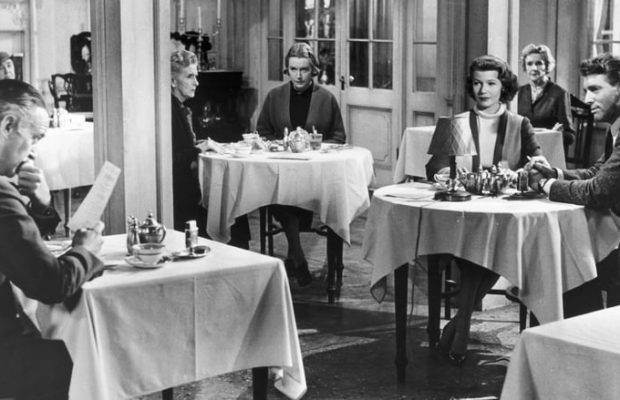 Toronto Film Society presented Separate Tables (1958) on Sunday, January 22, 1989 in a double bill with The Chalk Garden as part of the Season 41 Sunday Afternoon Film Buffs Series “A”, Programme 5.

Terence Rattigan’s two one-act plays under the title “Separate Tables” had provided a wonderful acting showcase for Eric Portman and Margaret Leighton, first in the London West End, and subsequently on Broadway in the seasons of 1955 and 1956.  Set in the same seaside boarding-house at Bournemouth out of season, the two little plays told separate tales of two sets of lonely people.  Portman and Leighton each played dual roles.  For the film, the independent production company headed by James Hill, Harold Hecht, and Burt Lancaster was delighted to hire Laurence Olivier to direct and star opposite his wife, Vivien Leigh, in the dual roles.  Opposition came from an unexpected source, though, when playwright Rattigan insisted that the two plays he united into a single simultaneous narrative, that he be responsible (in collaboration) for the new screenplay himself, and that, obviously, the four major roles should be played by four different performers.  The Oliviers lost interest in the project and withdrew.

The resulting screenplay is a masterpiece of skillful integration.  The two major plots (and the various sub-plots) unwind with ease and clarity, held together by the age-old unitiers of time and place.  As well, most characters refer for advice or consolation to the pivotal hotel owner (expertly played by Wendy Hiller), who has her own share of problems.  But the film became in its transformation something of a genteel Grand Hotel, quite different from the intimate chamber dramas which Rattigan had originally written. 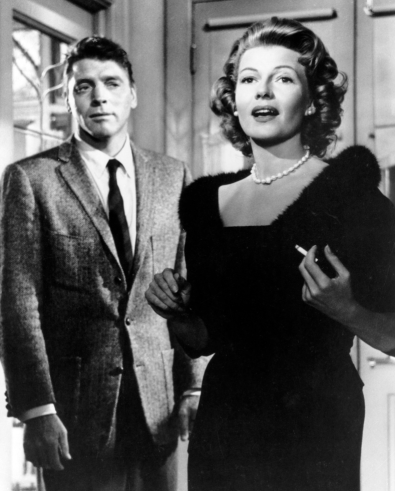 In re-casting the film, Hecht-Hill-Lancaster turned to their most immediate resources for one of the plots.  For the role of the boisterous but reclusive writer who is having an affair with the hotel owner, they cast one of their own number.  But since Burt Lancaster was unlikely to play a convincing Englishman, Rattigan rewrote this character as an American.  His wie, who arrives unexpectedly at the boarding-house, was also rescripted as an American, played by the wife of yet another producer, Rita Hayworth (at the time, Mrs. James Hill).  Some of the critics of 1958 found this plot underwritten and inadequately acted.  But as the years pass, it is this part of the film which stands up best.  Some of the gaps in the motivation of the Lancaster character can now pass for intriguing ambiguities.

The second plot, dealing with a phony army Major and a mother-dominated spinster, is now badly dated.  Such characters seem inconceivable in the world of the 1980s, especially as played by David Niven and Deborah Kerr.  Kerr’s forthright final lines, clearly meant to be inspiring, are, in the light of all the hand-wringing and nervous tics that have preceded, instead quite literally incredible.  But while Kerr is merely performing a pathological version of one of her usual tremulous spinster/governess/nun roles, Niven’s dissimulating Major is a complete departure from his usual suave screen persona.  For this alone, perhaps, he deserved his Oscar.

The whole casting process resulted in some interesting combinations.  Deborah Kerr, for instance, had first come to film audiences’ attention in a supporting role to Wendy Hiller’s Major Barbara (1941).  Here, it is Hiller who is supporting Kerr (while turning in an Oscar-winning performance).  The film also juxtaposes those two grand old British clones, Gladys Cooper and Cathleen Nesbitt.  Both were born in 1888.  Both were great beauties on the British stage around the First World War.  (Cooper was the foremost pin-up girl of the period; Nesbitt was the mistress of the legendary poet, Rupert Brooke.)  Both had given unforgettable film performances, Cooper in Now Voyager (in which she treated poor Bette Davis much as she treats Kerr here), and Nesbitt in a reprise of the Maria Ouspenskaya role in Leo McCarey’s remake of his Love Affair, An Affair to Remember.  They alone are worth the price of admission to Separate Tables.  And Felix Aylmer, the Polonius from Olivier’s Hamlet, is an added bonus.  (Some may prefer the young Australian actor Rod Taylor in a role which predates Hitchcock’s The Birds by five years.)

Some critics believe that Delbert Mann’s direction was nothing more than workmanlike here.  For them, this film comes merely as a stepping-stone between Mann’s TV-inspired early Paddy Chayefsky collaborations (Marty and The Bachelor Party) and his glossy Doris Day period (Lover Come Back and That Touch of Mink).  These critics are, though, overlooking the third side of Delbert Mann, the skilled adapter of serious Broadway plays like Desire Under the Elms and The Dark at the Top of the Stairs.  This is where Separate Tables belongs in his career.