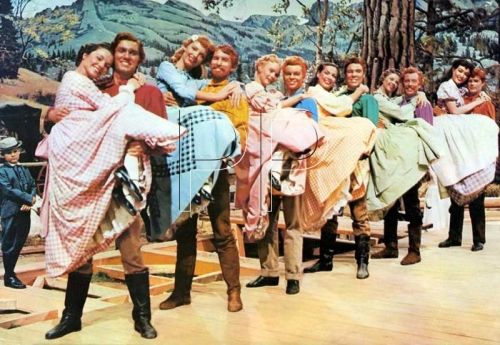 Toronto Film Society presented Seven Brides for Seven Brothers (1954) on Monday, February 13, 1984 in a double bill with She Loves Me Not as part of the Season 36 Monday Evening  Film Buffs Series “B”, Programme 7. 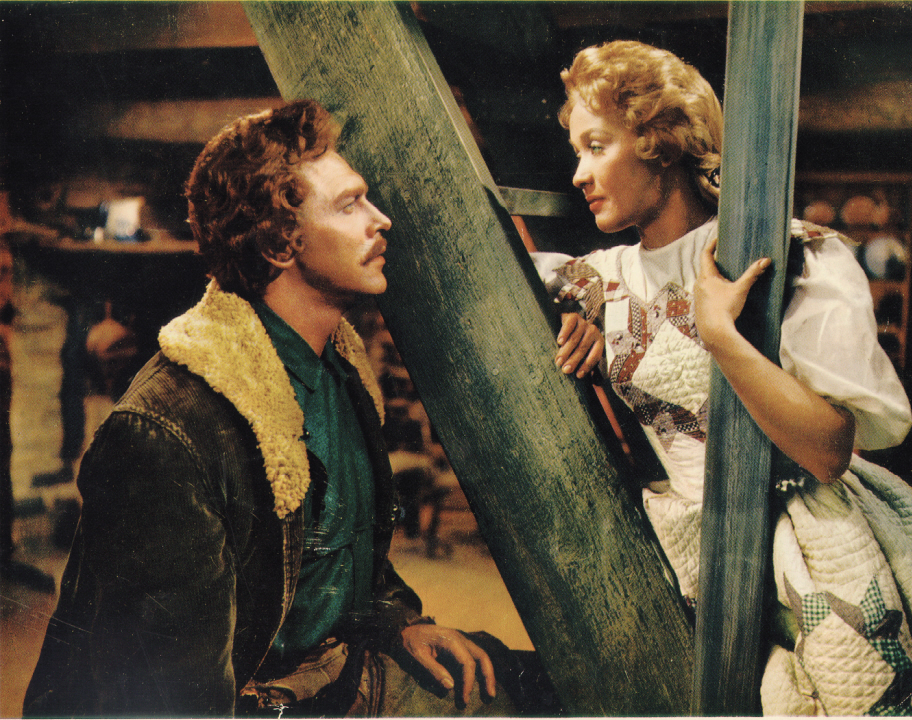 The early 1950s found MGM justifying large outlays for screen rights to stage hits or musical classics such as Annie Get Your Gun (1950), Showboat (1951), and Kiss Me Kate (1953) with elaborate screen mountings.  However, there emerged from the Metro portals in 1954 a zesty musical that was original in origin, inexpensively produced on the back lot, and would become a box-office champion.

Stanley Donen, who in tandem with Gene Kelly or on his own had produced several inspired MGM musical packages already, rose to the occasion with this by Michael Kidd, the picture boasted only two name stars–Jane Powell, who had been graduated from the Juvenile chores she began at the studio in Holiday In Mexico (1946), and Howard Keel, stalwart baritone workhorse whom producer Jack Cummings had especially requested for the pivotal role of frontiersman Adam.  Playing the six brothers were carefully chosen, proven dancers.  There were Jacques d’Amboise of the New York City Ballet, Marc Platt of the Radio City Music Hall Corps, Tommy Rall (who had been a featured dancer in Metro’s Kiss Me Kate and who had later scored on Broadway in Milk and Honey), and film dancer and actor Matt Mattox (his singing voice was dubbed by Bill Lee).  In addition, there were studio contractees Russ Tambly, whose dancing was on a professional par with his cohorts, and Jeff Richards, beefcake juvenile who spent most of the dancing numbers watching and encouraging his on-screen siblings.  All the men were dyed redheads for the picture. MGM picked relative unkowns to play the “brides,” including blonde newcomer Ruta Kilmonis, who later changed her surname to Lee, and a twenty-three-year-old brunette amazon beauty named Julie Newmeyer, who later became a Broadway sensation as Julie Newmar of The Marriage-Go-Round (1958).

Although they might have seemed an unlikely combination, tall Keel and petite Powell proved amazingly adept together, he with his masculine verve and rich singing, she being pretty and spunky, and with a clearly pitched high tone that reverberated well on the soundstages.  The highlight of the film was the barnraising sequence, a lengthy dance scene divided into two sections: the acrobatics and then the choreographed fight.  As Douglas McVay describes in “The Musical Film” (1967), “Here, everything–music, terpsichore, the incredibly agile and energetic male and female corps, George Folsey’s CinemaScope, Ralph Winter’s editing and Donen’s mise-en-scene–united to produce the best square dance ever.” — From “The Best of M-G-M, The Golden Years 1928-1959” by James Robert Parish and Gregory Mank.

In “The Hollywood Musical”, Clive Herschhorn had this to say about tonight’s film: “Not since On The Town (MGM 1949) was there a musical as dance-oriented as director Stanley Donen’s exuberant Seven Brides For Seven Brothers.  Based on a story by Stephen Vincent Benet called “The Sobbin’ Women”, it was blessed with a witty screenplay by Albert Hackett, Frances Goodrich and Dorothy Kingsley, and had an original score by Gene DePaul and Johnny Mercer that was a pip.  The unusually strong story concerned the seven Pontipee brothers, all of whom lead a rough, lonely existence on their farm in Oregon, and their successful–if somewhat unorthodox–attempts to find themselves wives.  As Adam Pontipee, the eldest of the borthers, Howard Keel was at his commanding best, while, as Milly, Jane Powell proved that her performance in Royal Wedding (1951) was no fluke and that, given the right material, she was as splendid a trouper as anyone who ever graced an MGM musical.  Making, perhaps, the biggest impact, though, were the six brothers, who collective presence was simply dynamic.  Chosen for their ability to dance, they imbued the film with a balletic quality (particularly in “The Lonesome Polecat Lament”) without ever losing the essentially masculine ‘feel’ of the piece.  Indeed, Seven Brides For Seven Brothers remains one of the most virile of all musicals, its memorable barnraising sequence being the most vigorously acrobatic dance routine ever filmed.