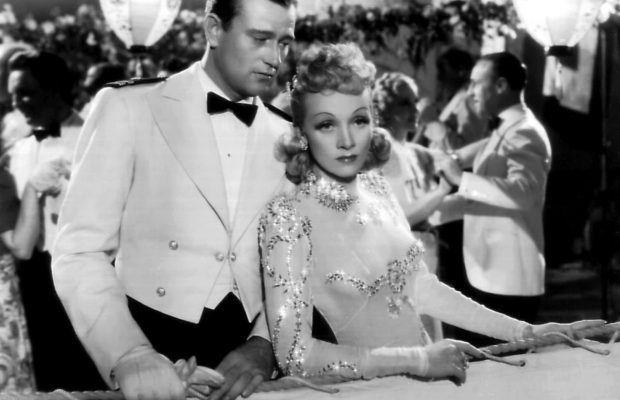 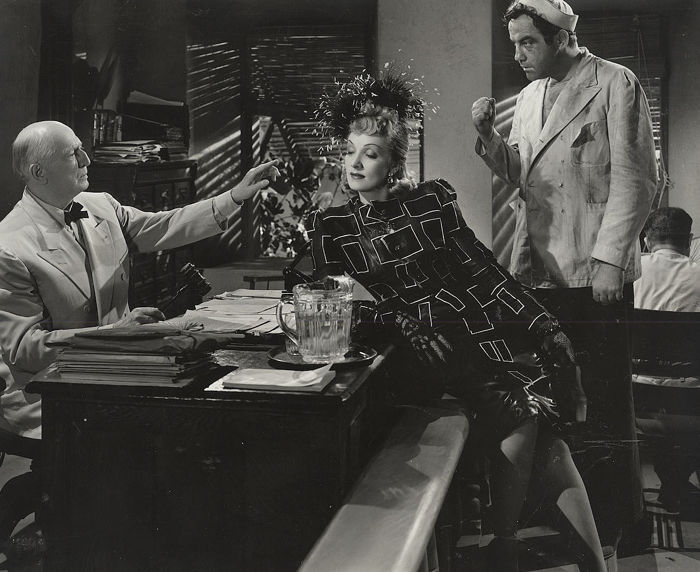 Marlene Dietrich (Bijou) vamping JOhn Wayne (Lt. Whitney) in Seven Sinners glimpses two superstars at the peak of their respective careers: the decline of Dietrich as the femme fatale of the screen temptresses of the thirties and the rise of Wayne as the ideal Western and American war hero of the forties.  In a fitting gesture to the “blowsy, heartless strumpet Lola-Lola” of the Blue Angel (1930) and the “Bawdy, boisterous, Battling Frenchie” of Destry Rides Again (1939) (They Had Faces Then, 1974) Dietrich enlivens an otherwise typical tropical siren story with an occasional sexual audacity and an ability to literally learn how to roll with the punches.  Set in the Seven Sinners Cafe in the south sea island of Boni-Komba during World War II, Dietrich seeks to escape a shadowy past by island hopping as a feature night-club singer in sleazy island bistros.  In between songs (“I’ve Been in Love Before”, “The Man’s in the Navy”, “I Can’t Give You Anything But Love, Baby”) Dietrich not only sports masculine garb to win the applause of her male admirers but also charms Wayne, a stalwart U.S. Navy Officer, into exchanging an officer’s uniform for a marriage of love.  Opting for a wildly romantic adventure while immersed in the hazy, chaotic, cheap island atmosphere, the effervescent couple are suddenly reminded by a close friend that “a fellow can’t get the Navy out of his heart and head” and impresses the point with a few punches.  Upholding a traditional loyalty to the U.S. Navy, Dietrich quietly deserts the island of Boni-Domba leaving the nay pals to a final brawl that eventually destroys the cafe.

Director Tay Garnett, ex-WWI flying instructor and movie stuntman, achieved directorial success in the early 1930s with stories of doomed love in unusual settings–either on board ship or in exotic locales, (Her Man (1930); One Way Passage (1932)).  Generally attributed with a visual flair for exotic atmosphere, an effective integration of background and plot, and a genuine feel for the human emotions and interactions that produce a flowing narrative style, Garnett offers a smorgasbord of star talents contrasting the selfish sensual life of a nightclub with the traditional ethics, values and traditions of the U.S. Navy.  Like the prototypic Lola-Lola, Dietrich’s doomed fate is that of a bewitching lady who earns the love of a man because of a public image and sensational lifestyle rather than any inherent personal qualities–all of which is colorfully captured in the heavily rouges lips and daring gowns and plumed feathers that animates the island populace.  Personifying the virtues of honesty, sincerity, loyalty and courage with a touch of compassion, Wayne’s rowdy, boisterous romanticism overcomes Dietrich’s seductive and alluring mannerisms in the climactic fight scene in Seven Sinners that became a model for a succession of action films in the 1940s: “people thrown through mirrors, swinging from chandeliers, falling off balconies and otherwise hurled through a barroom” (John Wayne, Alan G. Barbour, 1974).  Despite Wayne’s obvious personal victory over the destructive sexual love of Dietrich, Dietrich embellishes the film with a few redeeming moments that reveals a more introspective and vulnerable character subtly woven into the imagery of Seven Sinners: the veiled face, the black/white-female/male tens on, ever-changing light and shadow picture compositions.  For this reason, the film is prevented from becoming either a raucous comedy or a serious drama. 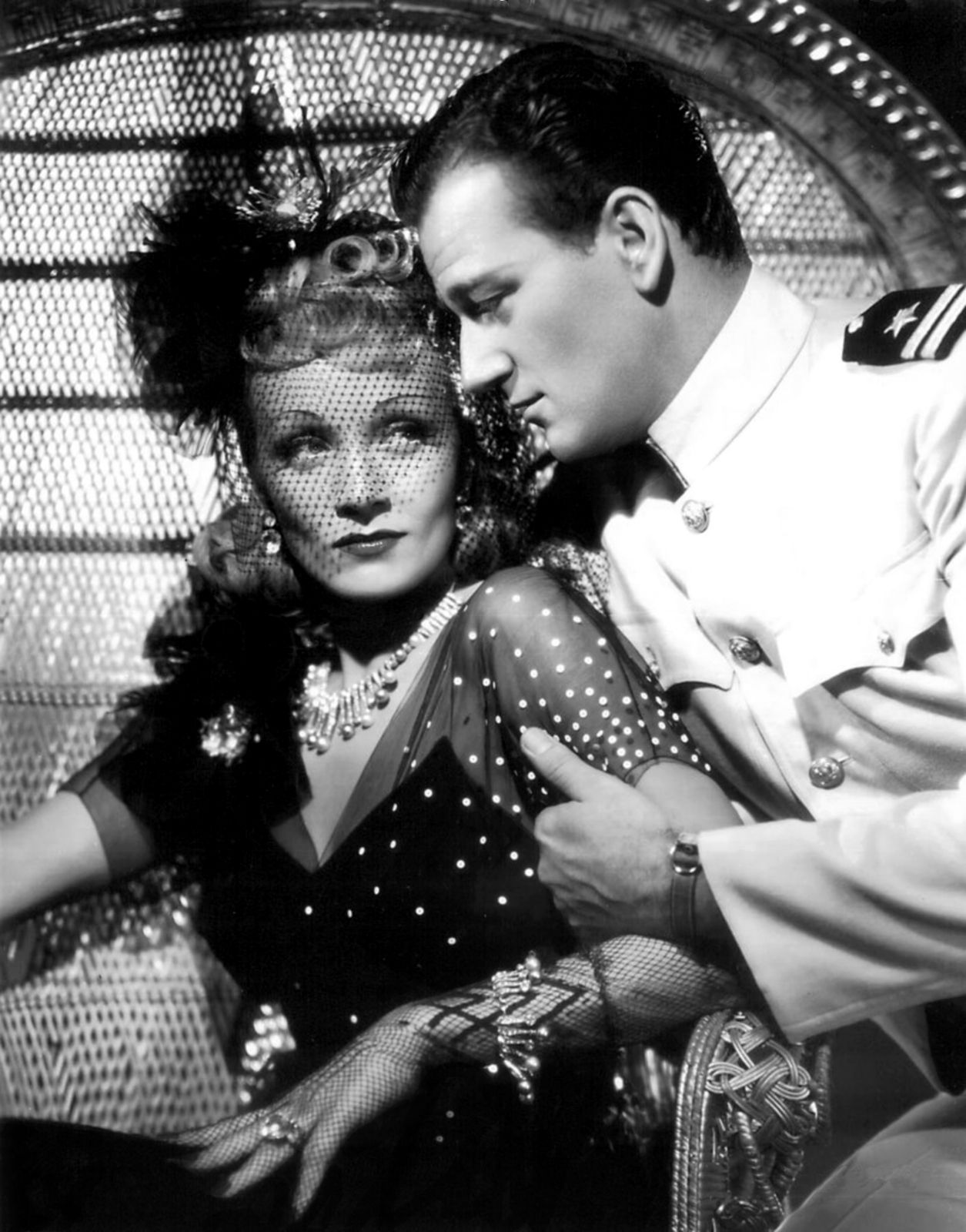 John “Duke” Wayne worked as third string prop man on the Fox lot in 1928 while attending University of Southern California on a football scholarship.  Developing a close relationship with director John Ford, the young unknown was recommended by Ford to Raoul Walsh for the lead role in The Big Trail (1930).  What followed was an eight year stint in over 80 forgettable low budget western serials until Ford offered Wayne the part of Ringo Kid in Ford’s western film classic Stagecoach (1939).  Since then, Wayne has achieved mythical fame with film audiences making him the biggest box-office attraction in film history.  As group president of the Motion Picture Alliance for the Preservation of American Ideals during the McCarthy era, John Wayne represented, offscreen and onscreen, the ultra American patriot.  At the end of a screen career of 40 years and 250 films, a special Oscar for Wayne’s performance in True Grit (1969) was awarded to Wayne by Hollywood.  After Wayne’s death in the late seventies, a congressional medal was truck in honour of the screen superstar and a Great American.