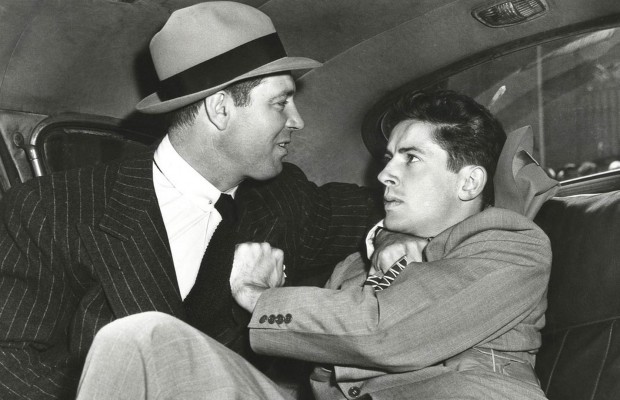 Toronto Film Society presented Side Street (1949) on Sunday, October 21, 2018 in a double bill with The Blue Dahlia as part of the Season 71 Sunday Afternoon Film Buffs Series, Programme 2.

MGM borrowed director Anthony Mann from Eagle-Lion Films and while Larry Parks was Mann’s first choice as his lead, ultimately the studio borrowed Farley Granger from producer Samuel Goldwyn, reteaming him with Cathy O’Donnell who had co-starred with Granger in director Nicolas Ray’s debut film They Live by Night made the previous year.  Because of this, Patricia King Hanson, Executive Editor of the AFI Catalogue, thought that Side Street could almost be viewed as a continuing story of They Live by Night.  She and Oliver Stone also theorizes that this was another film that showed the difficulties Americans had coming home after serving in the Second World War.

Side Street was filmed over a seven-week period beginning April 21, 1949, and the first ten days of production were in Manhattan.  Mann had a strong affiliation with cinematographer John Alton, who shot many of his previous films, but for this film he used Joseph Ruttenberg, who was an excellent substitution.  In a touch of self-referential humour, when Jean Hagen’s nightclub singer leads Farley Granger’s Joe into the dimly lit foyer of her slum apartment, she quips, “What some people won’t do to save a dollar.  You’d think one little light costs a fortune.”  This must have amused studio personnel accustomed to working with limited lighting resources on lower-tier projects.

Filming Side Street on location in Manhattan had its share of drama.  During the location scouting process, MGM’s William Kelly and several production officials took a police barge on the East River as a practice run for an early scene in the film in which crewmen on a freighter discover a floating body.  Kelly later told Newsweek, “We actually found a body—it had been drifting around in the river a couple of months.”

Ruttenberg was responsible for the momentous introductory aerial views of 1949 New York, which appear under the main titles and were filmed during a three-hour blimp flight over Manhattan as the cinematographer, sitting on the edge of a plank inserted into an open door of the airship, operated the camera.

Night sequences on Eighth Street in Greenwich Village, attracted, according to MGM publicists, 3,000 onlookers which Mann actually welcomed, since many of whom, unknown to themselves, appeared as “background,” with the passersby and traffic adding a compelling authenticity to the New York story.

Visual symbolism came into play in a trenchant location shot filmed in the Stuyvesant Town housing development in the East Twenties by using a low wide-angle lens through the jail-like bars of a fence while Granger is observing children playing on a swing set.  Mann filmed the children with a hidden camera in order to capture their playground activities naturally.

However, the greatest location challenges were the police-taxi chase at the end.  Side Street reaches a crescendo as the taxi starts skidding along Wall Street.

Theatres were urged to promote the movie in the side streets of their neighbourhoods, by photographing the “prettiest girls” on a side street, offering free tickets to residents whose side street addresses were printed in the newspaper, and even a side street shopping campaign with stores located off the main streets.

“Question: From that film to Side Street, your pictures have more or less a documentary aspect….

Mann:  The semi-documentary school offers real possibilities.  Filming in natural settings doubled the scenes’ veracity and, consequently, shaped the film by giving it an often unexpected appearance and consistency.  I liked the element of chance that could always be introduced.  Side Street, for example: have you noticed the shift between the first part, uninteresting, and the whole second half which takes place in Manhattan?  It must be said too that Sidney Boehm’s script wasn’t very distinguished…”  (“A Lesson In Cinema“, Interview with Anthony Mann, Cahiers du Cinema in English No 12 [December 1967], p. 46)

“Anthony’s next film, Side Street (1949), an original story and screenplay by Sydney Boehm, marked a return to the crepusculous world of T-Men, and like its illustrious predecessor, it too was underestimated by contemporary critics, typical of whom may be cited Bosley Crowther in The New York Times: ‘the respectable but somewhat edious formula of M.G.M.’s Crime Does Not Pay shorts has been used by that studio for Side Street, a feature-length drama of crime and its profitless consequences.  The story is semi-documentary, being a detailed account of the fearful adventures of a young mail carrier who recklessly steals a wad of money that is “hot”, and is played for considerable realism against the actuality background of New York.  In the principal role, Farley Granger makes a vividly terrorised lad, and James Craig, Paul Kelly, Charles McGraw stand out as assorted thugs and cops.  In short, it’s a fair enough crime picture, ending with a screaming downtown chase and the moral very tenderly delivered by the usual narrator’s voice.  But, cut down to its essentials, that’s just about all it is…It can only be fully recommended to those who have a deep and morbid interest in crime.’  No mention is made of the outstanding work contributed by the director and the female members of the cast: Cathy O’Donnell, Jean Hagen, Adele Jergens.”  (Reid, John Howard, “Mann and his Environment“, Films and Filming VIII [January 1962], p. 44)

“…The film, though quite well made, fails to be sufficiently exciting for a good melodrama, and its characterisation is not deep.  But there are good performances by Farley Granger, Cathy O’Donnell and Paul Kelly, and the last reel erupts unexpectedly into a really first rate car chase in the back streets of New York at 5 A.M. on a Sunday morning, brilliantly shot and cut.”  (Monthly Film Bulletin XVII [April-May 1950], p. 69)