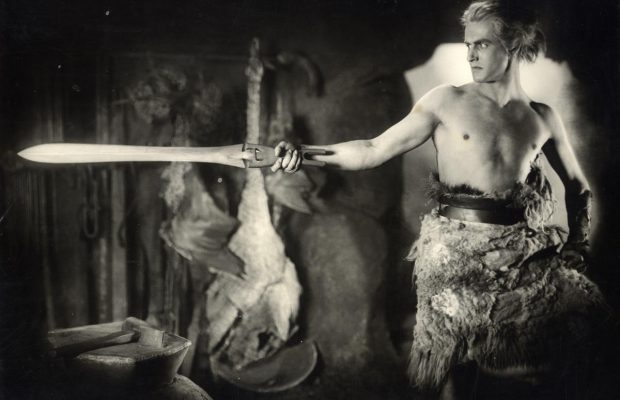 The programme will open with a Harry Langdon comedy, Soldier Man.  Langdon rose from vaudeville through short Mack Sennett comedies to features directed by Frank Capra (Tramp, Tramp, Tramp, The Strong Man, Long Pants).  Of him James Agee wrote: “He Looked like an elderly baby, and at times a baby dope-fiend; he could do more with less than any other comedian.  He symbolized something as deeply and centrally human as Chaplin’s Tramp.  There was of course an immense difference in inventiveness and range of virtuosity.  It seemed as if Charlie could do literally anything, on any instrument in the orchestra.  Langdon had one queerly toned, unique little reed.  But out of it he could get incredible melodies.  Twitchings of his face were signals of tiny discomforts too slowly registered by a tinier brain; quick, squirty little smiles showed his almost prehuman pleasures, his incurably premature trustfulness.  He was a virtuoso of hesitations and delicately indecisive motions.  He was as remarkable a master as Chaplin of subtle emotional and mental process and operated much more at leisure.  The finest of intuitive improvisers, his magic was in his innocence, and Capra took beautiful care not to meddle with it.”

“If there was a rule for writing Langdon material”, he said, “it was this: his only ally was God.  He might be saved by a brick falling on a cop, but it was verboten that he in any way motivate the brick’s fall”.

Siegfried, first part of The Nibelungen, was released in 1924, followed by Kriemhild’s Revenge in the same year.  Dejected after her defeat and her heavy material sufferings, Germany tended to salve her deeply wounded pride by reviving the more imposing of her national legends.  Siegfried Kracauer writes: “Lang defined this film as a national document fit to publicize German culture all over the world.  His whole statement somewhat anticipated the Goebbels propaganda”.  Georges Sadoul says the film foreshadows the Nazi pomp of Nuremberg and the UFA-like architecture and pageantry of the Third Reich, and Kracauer draws a parallel between Hagen and “a well-known type of Nazi leader”.  Lotte Eisner writes: “Some critics blamed Lang for constructing his vast-scale exteriors in the studio with a huge amount of plaster, stucco and canvas.  Yet the artificial forest of Siegfried breathes life; sunbeams weave across the dense trees and a radiant haze floats between their heavy trunks.  If here paintings come to life on the screen, we could, vice versa, halt the Nibelungen film any moment and find ourselves in front of a well-balanced, self-contained and static picture”.

Looking at Siegfried in 1950, one is soon aware of its outstandingly good and bad elements.  The “expressionist” style in German silent cinema, which encouraged directors and designers to stylize both decor and acting, rapidly passed out of fashion.  Siegfried seems farther from present-day film-making than the silent films of Griffith and Eisenstein because of this excessive stylization.  Every emotion is registered with emphatic gestures and facial expression; the characters are of course larger and psychologically simpler than life in their legendary setting so that many heroic magnification is correct.  But human characterization was not Lang’s main consideration.  He wanted to create a legendary atmosphere by pictorial means.  Siegfried and his warrior kings observe strict formation in the Burgundian court, and processions and church services alike are seen to be perfect in their pictorial symmetry.  If this exact symmetry oppresses you, the architecture of Siegfried will soon become a visual bore.  But if you like symmetry, you will find a nobility and grandeur in these palaces and courts, and the costumes with their equally symmetrical designs from the Reinhardt theatre.  The most impressive and beautiful scenes in the film are those in the forests, misty glades and caverns–after many viewings over nearly 20 years I still find the sequence of Siegfried’s approach to the dragon through the high trees one of the most beautiful in silent cinema, and the dragon himself the most impressive of the screen’s giant monsters.  The descent into the cave holding the Rhine treasure hoard is a wonderful studio spectacle, and the shot of the slowly petrifying dwarfs is completely convincing.  One’s memory returns in the end of these scenes, or to those of the ride of Siegfried on his horse led by Alberic through the mists, and his death at the end of the film in the little artificial glade.