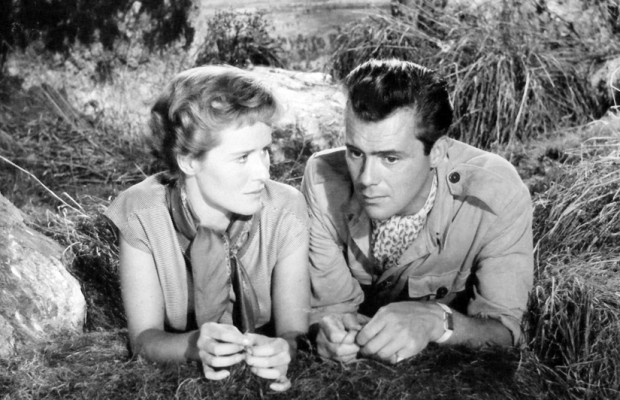 When Alan Howard, a young Englishman, arrives in Kenya to visit his older brother on his farm he finds the latter has been brutally murdered by the Mau Mau. He decides to go on

exploiting the farm and to fight the rebels with all his energy. He falls in love with Mary, the daughter of a settler who lives close to his estate. Although the young woman shares his love she disapproves of Alan’s hatred of Blacks. Alan will eventually mellow after Dr. Karanja, a native physician, sacrifices his life to prevent the slaughter of a group of white settlers. Written by Guy Bellinger

DIRK BOGARDE (1921-1999) was born Derek Jules Gaspard Ulric Niven van den Bogaerde in a nursing home at 12 Hemstal Road, West Hampstead, London, of mixed Flemish, Dutch and Scottish ancestry, and baptised on 30 October at St. Mary’s Church, Kilburn. His father, Ulric van den Bogaerde was the art editor of The Times and his mother, Margaret Niven, was a former actress. He attended University College School, the former Allan Glen’s School in Glasgow.  He later studied at the Chelsea College of Art and Design. He began his acting career on stage in 1939, shortly before the start  of World War II.

During the 1950s, Bogarde came to prominence playing a hoodlum who shoots and kills a police constable in The Blue Lamp (1950) co-starring Jack Warner and Bernard Lee; a handsome artist who comes to rescue of Jean Simmons during the World’s Fair in Paris in So Long at the Fair, a film noir thriller; an

accidental murderer who befriends a young boy played by Jon Whiteley in Hunted (aka The Stranger in Between) (1952); in Appointment in London (1953) as a young wing commander in Bomber Command who, against orders, opts to fly his 90th mission with his men in a major air offensive against the Germans; an unjustly imprisoned man who regains hope in clearing his name when he learns his sweetheart, Mai Zetterling, is still alive in Desperate Moment (1953); Doctor in the House (1954), as a medical student, in a film that made Bogarde one of the most popular British stars of the 1950s, and co-starring Kenneth More, Donald Sinden and James Robertson Justice as their crabby mentor.

In The Sleeping Tiger (1954), Bogarde played a neurotic criminal with co-star Alexis Smith, and Bogarde’s first film for American expatriate director Joseph Losey; Doctor at Sea (1955), co-starring Brigitte Bardot in one of her first film roles; as a returning colonial who fights the Mau-Mau with Virginia McKenna and Donald Sinden in Simba (1955); Cast a Dark Shadow (1955), as a man who marries women for money and then murders them; The Spanish Gardener (1956), co-starring Michael Hordern, Jon Whiteley, and Cyril Cusack; Doctor at Large (1957), again with Donald Sinden, another entry in the Doctor film series, co-starring later Bond-girl Shirley Eaton; the Powell and Pressburger production Ill Met by Moonlight (1957) co-starring Marius Goring as the German General Kreipe, kidnapped on Crete by Patrick “Paddy” Leigh Fermor (Bogarde) and a fellow band of adventurers based on W. Stanley Moss’ real-life account of the WW2 caper; A Tale of Two Cities (1958), a faithful retelling of Charles Dickens’ classic; as a flight lieutenant in the Far East who falls in love with a beautiful Japanese teacher Yoko Tani in The Wind Cannot Read (1958); The Doctor’s Dilemma (1959), based on a play by George Bernard Shaw and co-starring Leslie Caron and Robert Morley; and Libel (1959), playing three separate roles and co-starring Olivia de Havilland.

After leaving the Rank Organisation in the early 1960s, Bogarde abandoned his heartthrob image for more challenging parts. He starred in the film Victim (1961), playing a London

barrister who fights the blackmailers of a young man with whom he has had a deeply emotional and loving relationship. The young man commits suicide after being arrested for embezzlement, rather than ruin his beloved’s career. In exposing the ring of extortionists, Bogarde’s character risks his reputation and marriage in order to see that justice is done. Victim was the first mainstream British film to portray the humiliation gay people were exposed to via discriminatory law, and as a victimized minority; consequently it had some effect upon a contemporary Sexual Offences Act 1967 change in English punitive prosecution of consensual same-sex affectional expression.

Other later roles included decadent valet Hugo Barrett in The Servant (1963), which garnered him a BAFTA Award, directed by Joseph Losey and written by Harold Pinter; The Mind Benders (1963), a film ahead of its times in which Bogarde plays an Oxford professor conducting sensory deprivation experiments at Oxford University a precursor to Altered States (1980); the anti-war film King & Country (1964), playing an army lawyer reluctantly defending deserter Tom Courtenay, directed by Joseph Losey; a television broadcaster-writer Robert Gold in Darling (1965), for which Bogarde won a second BAFTA Award, directed by

John Schlesinger; Stephen, a bored Oxford University professor, in Losey’s Accident, (1967) also written by Pinter; Our Mother’s House (1967), an off-beat film-noir directed by Jack Clayton in which Bogarde plays an n’er do well father who descends upon “his” seven children on the death of their mother, British entry at the Venice Film Festival; German industrialist Frederick Bruckmann in Luchino Visconti’s La Caduta degli dei, The Damned (1969) co-starring Ingrid Thulin; as ex-Nazi, Max Aldorfer, in the chilling and controversial  The Night Porter (1974), co-starring Charlotte Rampling, directed by Liliana Cavani; and most notably, as Gustav von Aschenbach in Morte a Venezia, Death in Venice (1971), also directed by Visconti; as Claude, the lawyer son of a dying, drunken writer (John Gielgud) in the well-received, multi-dimensional French film Providence (1977), directed by Alain Resnais; as industrialist Hermann Hermann who descends into madness in Despair (1978) directed by Rainer Werner Fassbinder; and as Daddy in Bertrand Tavernier’s  These Foolish Things (1991), co-starring Jane Birkin as his daughter, Bogarde’s final film role.

In some of his other roles during the 1960s and 1970s, Bogarde played opposite renowned stars, yet several of the films were of uneven quality, down to demands or limitations set by the studio or their scripts: The Angel Wore Red (1960), playing an unfrocked priest who falls in love with cabaret entertainer Ava Gardner during the Spanish Civil War; Song Without End (1960), as Hungarian composer and virtuoso pianist Franz Liszt, a flawed film made under the initial direction of Charles Vidor (who died during shooting), and completed by Bogarde’s friend George Cukor, the actor’s only disappointing foray into Hollywood; the campy The Singer Not the Song (1961), as a Mexican bandit co-starring John Mills as a priest; Damn the Defiant! (1962), playing sadistic Lieutenant Scott-Padget, co-starring Sir Alec Guinness; I Could Go On Singing (1963), co-starring Judy Garland in her final screen role; Agent 8¾ (1964), a James Bond-type spy spoof co-starring Robert Morley; Modesty Blaise (1966), a campy spy send-up playing arch villain Gabriel opposite Monica Vitti and Terence Stamp and directed by Joseph Losey; The Fixer (1968), based on Bernard Malamud’s novel, co-starring Alan Bates; Sebastian (1968), as Sebastian, a mathematician working on code decryption, who falls in love with Susannah York, a decrypter in the all-female decoding office

Bogarde suffered a minor stroke in November 1987, at a time when his partner, Anthony Forwood, was dying of liver cancer and Parkinson’s disease. In September 1996, he underwent angioplasty to unblock arteries leading to his heart and suffered a massive stroke following the operation.  Bogarde was paralyzed on one side of his body, which affected his speech and left him in a wheelchair. He managed, however, to complete a final volume of his autobiography, which covered the stroke and its effects as well as an edition of his collected journalism, mainly for The Daily Telegraph. He spent some time the day before he died with his friend Lauren Bacall. Bogarde died in London from a heart attack on 8 May 1999, age 78.