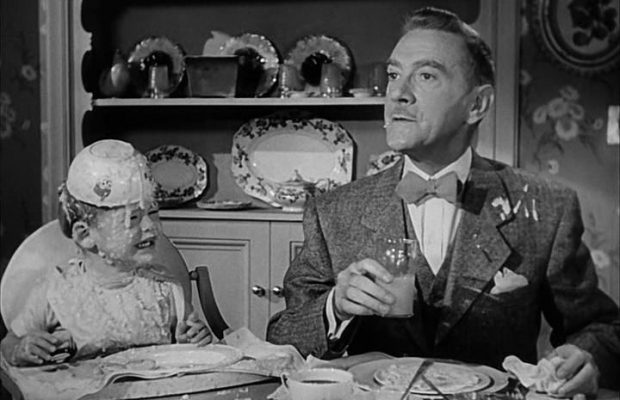 Both of this afternoon’s comedies focus on the man of genius, independent thinkers and men of action.  Sitting Pretty is a comedy of manners and the lack of them, while Monsieur Verdoux is, as an opening title states, a comedy of murders.

The self-centred, acidulously impudent wit has long been a staple of well-written movies–and the characters so created date rather well, from Lee Tracy’s earliest films (Big Time [1929], Blessed Event [1932]), to Noel Coward’s brilliant Anthony Mallare of The Scoundrel (1935), to George Sanders’ unforgettable Addison DeWitt in 1950’s celebrated All About Eve, to Tom Conti’s Oscar-nominated poet-rebel in this year’s Reuben, Reuben.  Clifton Webb’s portrayal of Lynn Belvedere in Sitting Pretty (followed by two lesser sequels, Mr. Belvedere Goes to College in 1949, and Mr. Belvedere Rings the Bell in 1951) ranks with the best, and was so memorable that his entire career was controlled by it.

F. Hugh Herbert (1897-1957), the American screenwriter responsible for Sitting Pretty‘s hilarious script, was greatly underrated as a writer of comedy.  His screenplays for Together Again (1944), Men In Her Diary (1945), Kiss and Tell (1945), Home Sweet Homecide (1946) and Margie (1946), which immediately preceded Sitting Pretty, contains some of the brightest dialogue of American post-war comedy.  These fondly remembered films were not Grade “A” super-productions, but did give stars like Irene Dunne, Charles Boyer, Louise Allbritton, Shirley Temple and Jeanne Crain class “A” dialogue.  Nobody could manipulate Herbert’s lines like Webb, and his exchanges in Sitting Pretty have become classic–with Robert Young, observing his snowman: (Webb) “Mr. King, you should have let your wife do the face.”  (“O’Hara) “I did the face!”  (Webb) “Oh well, it will soon melt.”; and with O’Hara, who is sculpting him: (O’Hara) “That’s what I like about Harry, he’s so modest.”  (Webb) “Your husband has a great deal to be modest about.”; with O’Hara and friends on the dance floor: (O’Hara) “Do you dance too, Mr. Belvedere?” (Webb) “I dance extremely well.”  (Friend) “I suppose you learned from Arthur Murray.”  (Webb) “No, I taught Arthur Murray.”; and finally, with Robert Young in the kitchen after his wife left him: (Young) “Stop shredding that lettuce.”  (Webb) “Life must go on, Mr. King.”

Clifton Webb (originally Webb Parmalee Hollenbeck) was born in Indianapolis in 1891, studied signing and appeared at Boston Opera in 1911, appeared on Broadway and nightclubs, and even taught dancing.  He became a leading musical comedy star for twenty years, from 1915 to the mid 1930s, and was in fact signed by MGM to make an appearance in Dancing Lady in 1933.  But Webb demanded equal billing to star Joan Crawford, and the role was given to Fred Astaire instead–his first film.  (There is, incidentally, a brief dance number with Webb and O’Hara in Sitting Pretty, suggesting that while Webb was certainly no Astaire, he was still a dancer of originality and verve.)  While Webb was a musical star in the 1920s, he appeared in some films opposite several interesting leading ladies: Ina Claire, Pauline Frederick, Barbara La Marr, and continued partnering leading ladies on stage: Marilyn Miller in “Sunny”, Beatrice Lillie in “She’s My Baby” (1928), and Gertrude Lawrence in “Treasure Girl.”  Laura (1944) was his first major movie hit, while Sitting Pretty, in addition to spawning the two sequels, dominated most of his later films: Cheaper By the Dozen (1950), For Heaven’s Sake (1950), Dreamboat (1952), Mister Scoutmaster (1953), and The Remarkable Mr. Pennypacker (1958).  He died in 1966.