Toronto Film Society presented So Evil My Love (1948) on Monday, January 16, 1989 in a double bill with Pitfall as part of the Season 41 Monday Evening Film Buffs Series “D”, Programme 3.

Producer Hal Wallis spared no shillings in giving an air of elegance to this tale of refined crime and punishment which he filmed in a British studio.  His ladies are dressed to stiff perfection in swishing silks and bombazines, his gentlemen wear the best-cut waist-coats and butlers and maids are everywhere.  A fine look of Victorian primness is in all the heavy furnishings and there is even a humid hot-house in which exotic plants abound.  His company, too, is very British and up to the formal etiquette required  of Victorian people who deal in blackmail and poisoning.  Like all Shearing murder stories–fictionalized versions of actual British murder cases during the 19th century–this has plenty of atmosphere and the usual trappings of the period. 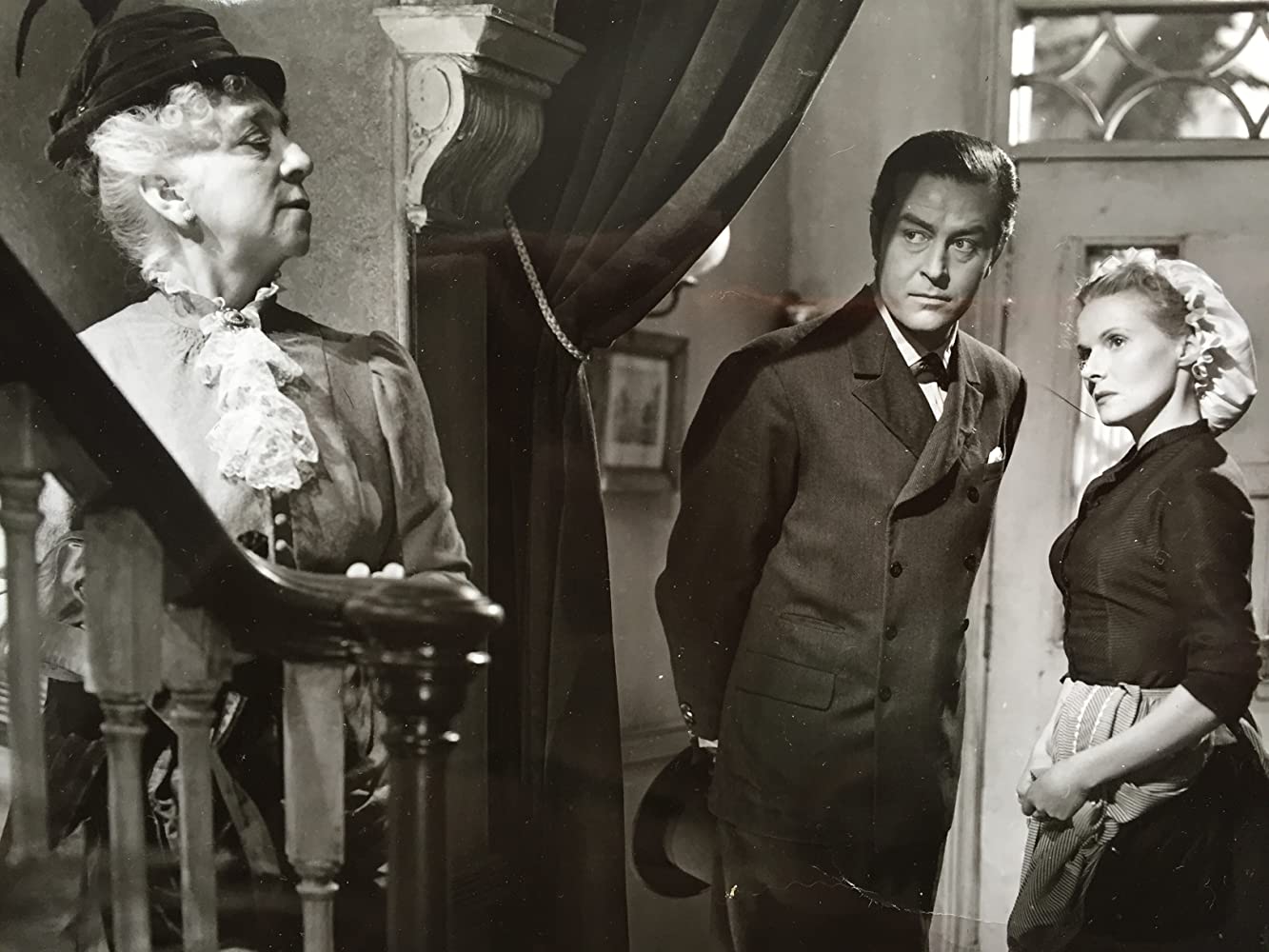 Ann Todd is exquisitely proper and emotionally dead-panned as the missionary’s poor widow who becomes the smooth perpetrator of subtle crime and Ray Milland is suavely deceptive as the cad who lures her on.  It’s not either principal’s fault that the emotions are barely touched.  The story gives scope for horror, patty, disgust and terror, and director Lewis Allen must share the blame with the wordy scriptwriters.  Style and atmospheric detail are no compensation for suspense, and if it is to be a psychological study of a good woman ruined by her love for a bad man, then Ann Todd should have been given a chance to harrow the soul.  Within the scope of the story she gives a fine performance and the same goes for Ray Milland, but impression remains that the emotional scenes are phoney.  It might also be mentioned that the harrowing climax of Joseph Shearing’s book has been changed in this picture treatment as well.

Geraldine Fitzgerald is touchingly anguished as the English lady with a past to conceal and Raymond Huntley, as her ambitious husband, maintains a temperature of twenty degrees below zero.  Incidental characters of mystery and potential evil are also portrayed, expertly but all to briefly, by Martita Hunt and Leo G. Carroll.

Ray Milland was born in Neath, Glamorganshire, in 1905, and educated at King’s College, London.  He served for a while as a royal guardsman, and all accounts of his early career suggest a dilettante existence, but at one point he toured Europe, under his own name, Reginald Truscott-Jones, as one half of a dance-team; the other was the equally unknown Anna Neagle.  He toured in “The Woman in Room 13” and had some walk-ons in films.  According to early publicity, he was friendly with Estelle Brody and while visiting her on the set was offered a small role in The Plaything (1929), in which she starred.  However, earlier in the year he had had biggish roles, as Raymond Milland, in two films for the same studio, BIP, in The Flying Scotsman and The Lady from the Sea, both directed by Castleton Knight and Moore Marriot, in the latter as his son, a Goodwin Sands lifeboatman.  C.B. Cochran offered a contract, but Milland had heard that Anita Loos had recommended him to MGM.  He decided to brave Hollywood, and that was when his Hollywood career began.

Sources: The New York Times and The Great Movie Stars, The Golden Years by David Shipman