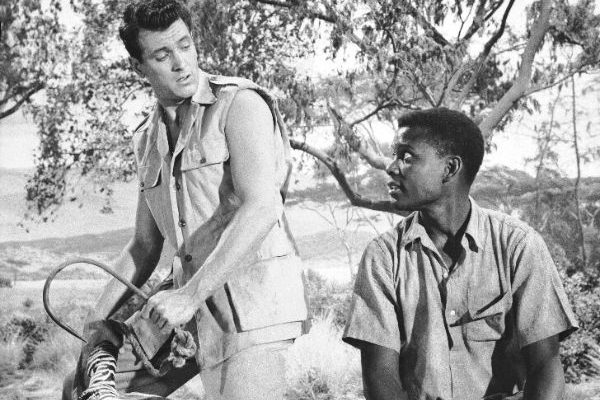 Toronto Film Society presented Something of Value (1957) on Sunday, January 16, 1983 in a double bill with My Little Chickadee as part of the Season 35 Sunday Afternoon Film Buffs Series “A”, Programme 5. 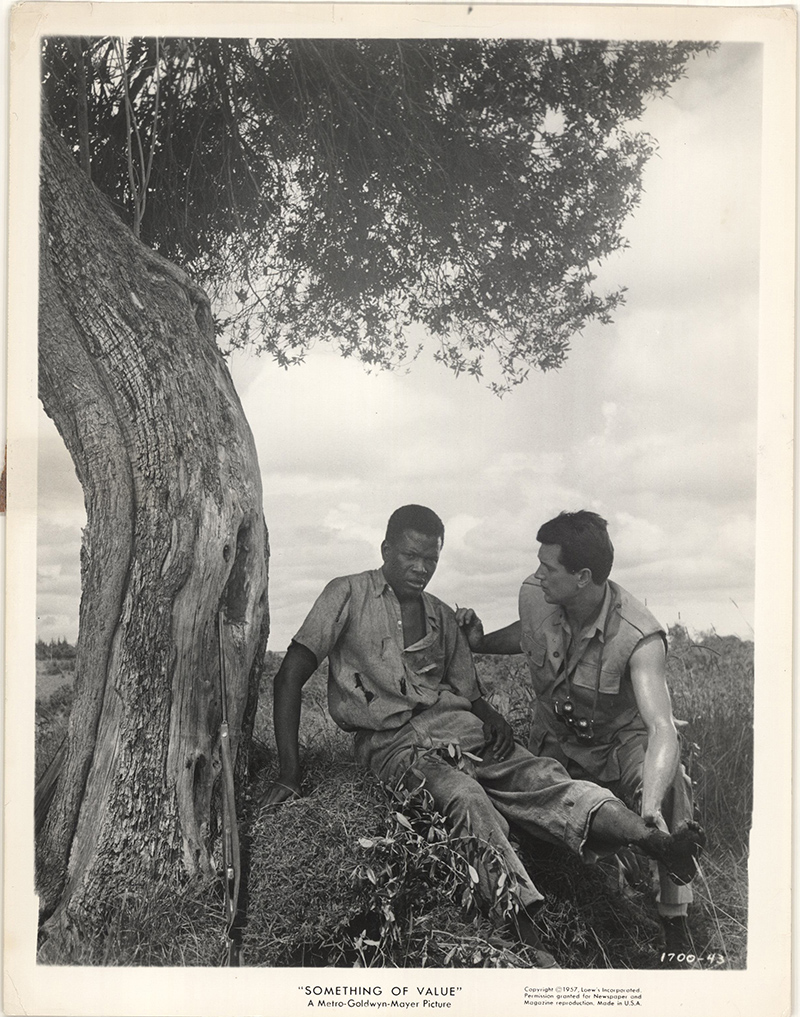 Something of Value is based on a best-selling novel by Robert Ruark, about the Mau Mau atrocities against white settlers in postwar Kenya.  The basic story–that of the lives of two boyhood friends taking strongly divergent paths–has been filmed many times.  In this case, Sidney Poitier plays Kimani, a young African who has grown up with Peter McKenzie (Rock Hudson), the son of his employer.  Made painfully aware by Jeff Newton, Peter’s brother-in-law, that his future position will be nothing more than that of a servant, Kimani is further humiliated when his father is imprisoned after committing a ritual murder.  He is recruited into the Mau Mau movement, and later leads a terrorist raid on the McKenzie farmhouse.

When the raid has taken place, the Sidney Poitier character sees himself in a mirror in the house.  He doesn’t break the mirror as a willful act of destruction, but from a sense of self-loathing and guilt.

Kimani subsequently goes on to become a Mau Mau general, and Peter becomes horrified at the extent to which the settlers, fighting terrorism, are themselves driven to terrorist methods–violence feeding on violence.

Rock Hudson came to Something of Value fresh from successes in Written on the Wind and Giant, after several years of working his way up to stardom in bit parts and starring roles in programmers like Taza, Son of Cochise.  The quiet-spoken actor from Illinois, in his early days, had two strikes against him.  The first was his ridiculous stage name, given him by his agent, Henry Wilson–who was notorious for coming up with such improbably names as Tab Hunter, Rory Calhoun, etc.  Hudson’s real name was Roy Fitzgerald, but reportedly Wilson wanted to avoid confusion with Irish actor Barry Fitzgerald.  Hudson’s second problem, oddly enough, was his appearance, so like one of those improbably handsome men on the cover of a Harlequin romance.  The result was that his acting ability was often overlooked.  However, Hudson, although not an actor of great emotional range, has usually in his major roles been quietly competent–and frequently that lowkey underplaying is as effective as the most violent histrionics.

Sidney Poitier had just triumphed in Edge of the City, with ohn Cassavetes.  The Miami-born, Bahams-raised actor had made his Hollywood debut in 1950, starring in Joseph L. Mankiewicz’s No Way Out.  This portrayal–of a doctor persecuted by criminal Richard Widmark–set the tone for much of Poitier’s subsequent work, as a noble and skilled professional (To Sir, with Love), or as a martyr (The Defiant Ones).  His role in today’s film is something of an exception.

Poitier is a highly talented actor, able to convey sincerity, compassion, intelligence, brooding restfulness, and understanding so skillfully that he makes it seem easy.  Above all, he projects dignity.

Richard Brooks had sought out Poitier for Something of Value after being delighted by the actor’s work in Brook’s 1955 film The Blackboard Jung, the explosive study of highschool delinquency.  Other films to Brook’s credit include Deadline U.S.A., with Humprey Bogart, and The Last Time I Saw Paris, starring the young and radiant Elizabeth Taylor.

The cast of Something of Value includes Wendy Hiller, best known for playing Eliza Doolittle int he 1938 Pygmalion, opposite Leslie Howard as Henry Higgins.  This film of George Bernard Shaw’s play was remade in 1964 as My Fair Lady, with Audrey Hepburn as Eliza.

Juano Hernandez, as Njogu, the tattered demagogue, is best remembered  for his excellent performance as the friend of young Claude Jarman in 1949’s Intruder in the Dust.

Filming, in common with so many ’50s films, was done on location, in Kenya.  Given the present-day troubles in Rhodesia, a film with a somewhat similar theme could be set there today; Hollywood, however, seems to have lost interest in Africa in the last 25 years, and such a film appears unlikely.