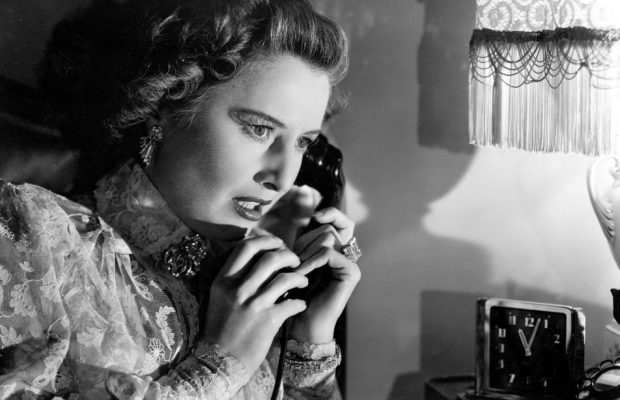 Toronto Film Society presented Sorry Wrong Number (1948) on Monday, May 12, 1980 in a double bill with The First of the Few as part of the Season 32 Monday Evening Film Buff Series, Programme 10.

“This is a story of loneliness…modern loneliness made stark and terrible because of one of the most wonderful inventions in the world–the telephone.

“A telephone can be a friendly, even a miraculous thing.  It can be a key to life, a wizard who evokes in a single breath the voices we most long to hear.  It can bring us news, entertainment, love, happiness.  It can solace our loneliness with a thousand tongues.  And yet there are times when it can also be horrible.  Its ring can emphasize our solitude more bitterly than any silence.  In the room of an invalid–in a life bare of friends, responsibilities, interests–a telephone can assume the aspect almost of a person, becoming now a friend…now an enemy.”

These observations were made by Lucille Fletcher, the author of Sorry Wrong Number.  It began as a short radio drama, about 25 minutes long, and was written for Agnes Moorehead by Miss Fletcher.  Miss Moorehead had enjoyed considerable success with the radio play but by the Hollywood yardsticks of 1948 she was not considered a sufficiently potent name to carry a jamor film.  The role went to Barbara Stanwyck whose career was suffering a decline, due to a few inferior films she had appeared in.  The studio owed her a good role.  Agnes Moorehead was asked about this in a 1966 interview and commented: “Of course I wanted to play the Stanwyck part…I went to Hal WAllis when they were casting it to put my hat in the ring, but he said he owed Barbara a picture and that I could have a supporting role.  I said no.  I’m not bitter about it.  I let the chips fall where they may and go on from there.”  Then, with a chuckle, she added: “They played my recording constantly on the set.”

In order to expand the original story for film purposes, a number of flashbacks were used.  These help to establish that Leona’s relationship with her hard-driving businessman father (Ed Begley) is a basic cause of her malcontented nature and that it is mostly because of her wealth that she has landed a young and virile husband (Burt Lancaster).  Stanwyck, as Leona Stevenson, gives a performance on the grand scale–described by Life magazine as “The most extended emotional jag in recent movie history.”  Leona is arrogant, querulous and demanding and Stanwyck takes her from irritation to terror in strong, sure strokes.

The contrived melodrama is rich in detail and in irony.  Leona’s wealth does not provide security in her crisis.  Her house is in a heavily populated city, but people are unaware of her danger.  The impersonal nature of the city is against her.  The telephone, a mechanical irritant, affords no true communication.  At the same time, these thoughts are aggravated by Leona’s personal state of mind.  She is her own worst enemy, believing, against medical opinion to the contrary, that she is physically incapable of moving from her bed.  Stanwyck plays this to the hilt.  A spoiled woman, used to having her way.  A hypochondriac, to make sure she gets it.  Insecurity in the midst of luxury.  Boredom, ill-temper, hysterics and nerves.  The film gave Stanwyck her fattest role since Double Indemnity, and she makes the most of the pampered, petulant, terrified leading character.

Director Litvak was hesitant about taking on the job, although he admired Stanwyck as an actress.  However, he had never worked with her and thought that with her strong personality, conflict might arise.  When he did meet her, all doubts vanished.  He considered her one of the most professional people he had ever worked with and she returned the compliment.  At the time rumour had it that the making of this film hurried Stanwyck’s white hair along.  She stated that her work did make many demands.  In 1965 she commented about the rumour: “I don’t know whether it was the part.  Of course, I worried every night that I went home, because all the scenes in bed were filmed consistently–which means that at 6:00 p.m. if I have hit a high emotional peak, then I must come back the next morning and start up there.  Well, this worries the life out of a performer, because how do you go and eat and shower and sleep and then at 9:00 a.m. start way up there?  It’s rather difficult.  So I worried quite a lot about it.  Now I don’t know whether that was part and parcel of (the change in hair color) but it did start on that.”

Although expanding the original drama for film was a challenge, it was well met by the polished direction of Litvak, who created the necessary mood of mounting tension assisted by Franz Waxman’s music and the photography of Sol Polito.  Most of all, Stanwyck’s acting, in an unsympathetic part, makes the film memorable.  She was nominated for an Academy Award, her fourth, but lost out to Jane Wyman for Johnny Belinda.