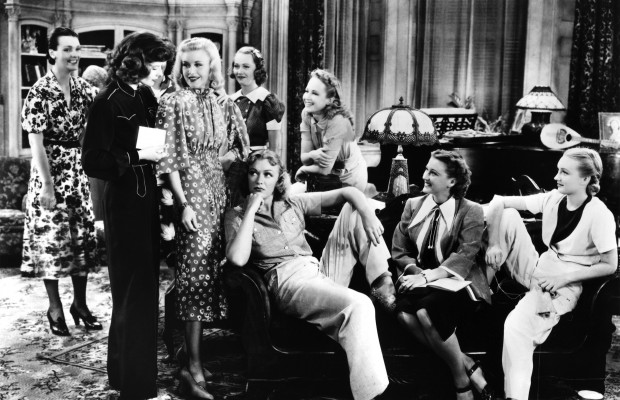 “I don’t know where you will find so much delight and unspoiled entertainment as in the RKO picture Stage Door.  The title, which they have scrupulously kept intact, once belonged to a chore Edna Ferber and George Kaufman did for Broadway.  The play had some stage people for characters and a moral about how, for a real actress, Hollywood was a fate worse than death.  It had quite a run and so the movies were happy to buy it.  Then apparently they read it, and some smart producer put Morrie Ryskind and Anthony Veiller to work writing a picture around the title and Gregory La Cava to work directing the finished script.  And the result is one of those miracles in celluloid.

The outline is simple: a school for girls with a theatrical boarding-house background.  There is the little hoyden with the stout warm heart; there are the girl with a sensitive talent on the downgrade and the girl with the rich poppa riding her high horse; there are comradeship, cat fights, and the subsidiary play of gossip, rivalry, boy friends, meals, openings for work–in short the process of life going on.  …As the girls sit around in the boarding-hose parlor, swapping thrust and riposte and grousing about the stew, their lines and habit of living are undoubtedly both more brilliant and more warmly generous than life.  But these reservations are not a part of the theater experience.  All that counts is that while this picture is being reeled off it is humanly lovely, bright and sad and true, that any overdose of either brilliance or easy simplicity is carried off in the happy stream of the thing before your eyes.  It is temperate with wisdom or perfectly ripping, at its own discretion. …

The people in action are the living matter of this piece; yet the idea and fulfillment of it, the direction, camera, and cutting had to come first.  And however we analyze, the sum of its parts is one of those things we have to catalogue under the term Miracle, so little we know of it.  The miracle happens when everybody concerned seems in sympathy with everybody else’s intention and gives it play, each gaining in personal achievement from the common inspiration.  Between its extremes of making you laugh and tearing your heart out and altogether beside what meaning it has, this picture is in touch with its audience at every point, it seems to grow along with them and they with it.  And in this easy proximity the mechanical voice and flat halftone screen drop away like the dimensions in a stereopticon; and an audience of millions leaves its private life to take part in this hour or so of life recreated, passing as though through the looking glass.”