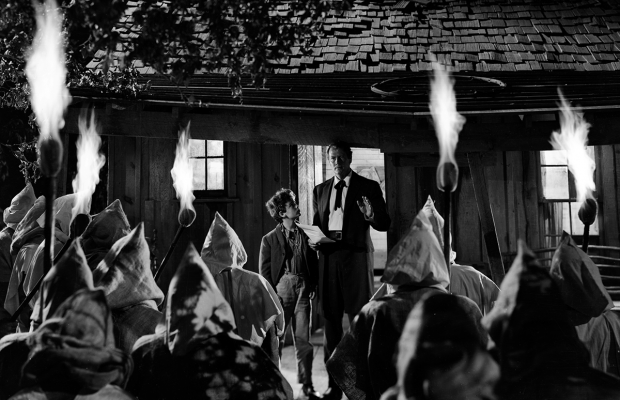 Toronto Film Society presented Stars In My Crown (1950) on Monday, May 30, 1977 in a double bill with They All Kissed the Bride as part of the Season 29 Monday Evening Film Buff Series, Programme 10.

This homespun drama centering around a parson in an unidentified southern town shortly after the Civil War, is spun out of the boyhood memories of a voice on the soundtrack that intermittently sends the story off into various directions as it recollects the parson’s influence on the townfolks.  Marhsall Thompson speaks the narration with an agreeable folksy touch, but it is the quiet dignity of Joel McCrea’s performance as Parson Josiah Doziah (J.D. for short) Gray that does most to hold this delicate blend of sentiment and pathos on a steady, sturdy course.

Continuity is never a strong point in recollections of boyhood experiences and a certain coloration is bound to creep into such reveries.  In this respect it maybe said that Start In My Crown is a sentimental reflection of an unassuming minister who loved his fellow man with a burning zeal.  But we feel sure that anyone who is willing to cast off the phony armor of sophistication which most of us unconsciously acquire in the process of growing older will experience a real spiritual uplift as a result of having seen Stars In My Crown.  For here indeed is an eloquent Sunday sermon done with a deft touch that best may be described as a richly rewarding entertainment.

Life’s full cycle is played out in Stars In My Crown as the parson ministers to his flock.  His own happy home life is saddened when his wife’s young nephew contracts typhoid fever and there is a crushing feeling of hopeless terror when an epidemic sweeps the town and the parson, after being upbraided by young Doc Harris as a possible carrier of the disease, shuts himself in from his people in their greatest hour of need.

There is pulse-quickening excitement when greedy townsmen attempt to drive an old Negro off his land and, hiding under the cloak of the Ku Klux Klan, set out to lynch him.  There is an easy, winning camaraderie between the parson and his old army buddy who will have no truck with God until He plows his lower forty acres.  And there is an unobtrusive touch of romance in the relationship of the doctor, who succeeds his father under customarily difficult circumstances, and the attractive schoolmarm.

Stars In My Crown is that kind of picture which cannot stand up to strenuous adjectives, for it is far off the beaten track of commercial entertainment in the usual sense of that connotation.  It is more like a visit to church, a refreshing experience that is very personal and can never be made through mere words to seem quite as good to the next fellow.  Mr. McCrea gives the picture an impeccable performance whether praying at the bedside of a dying person or brandishing his two guns in a saloon to command attention while he reads from the Bible.  Ellen Drew is fine as his wife: Juano Hernandez is excellent as the aged Negro, and Dean Stockwell, the late Alan Hale, James Mitchell and Amanda Blake head a supporting cast that is uniformly very good.  With the help of a screenplay by Margaret Fitts and the direction by Jacques Tourneur, Stars In My Crown has become a real cinematic treasure.

Jacques Tourneur interviewed by Bertrand Tavernier:  As far as I’m concerned Stars In My Crown is my best film.  And yet, nobody has seen it.  It is a truly American story.  The life of a small community during one year, seen through the eyes of a child.  There were a number of different episodes, an epidemic, the arrival of the K.K.K., and I tried to show all these events from the point of view of a child. The film had many sensitive scenes.

Q.  Was it a religious film?

A.  Oh no…  The main character was a parson, but it wasn’t a film of religious propaganda.  On the contrary, I tried to treat most of the scenes in a somewhat ironic manner.  I wanted to make fun of it in a lighthearted sort of way, without sermonizing or imposing moral lessons.  But at the same time, the story had to be told in the way it was experienced by a young boy who was part of the community.  I had to efface myself in favour of the boy…Perhaps I effaced myself too much.  At any rate, the film is totally unknown.  It almost ruined my career.  Nevertheless, I assure you it’s a good film…