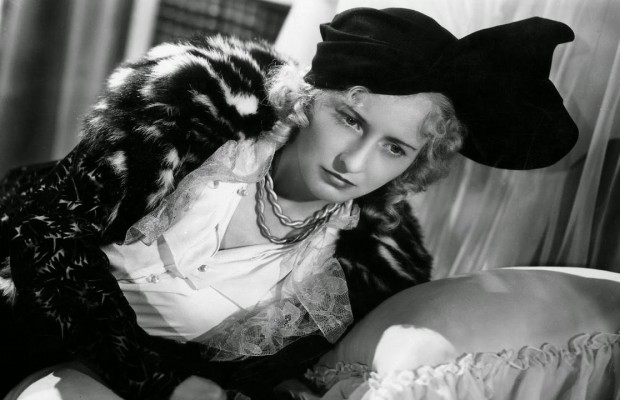 Picking one particular role as a favorite is a very difficult thing to do, since there were several that were personal favorites of mine.  In this era when so many pictures are made for shock value, it may seem strange to some that my favorite role is one that was founded on sentiment, and which audiences remember because of the great heart which the central character in Stella Dallas showed.  I have played many unsympathetic characters, like the ruthless Phyllis Dietrichson in Double Indemnity, and I know that such characters are sought after by many actresses who realize that roles in which they play evil women sometimes make a deep impression.  Such parts have their own fascination for an actress.

However, for me there was even more enjoyment in playing Stella Dallas–it was a part which showed a woman moved primarily by unselfish motives.

The role was a challenging one for me (and I always enjoy a part that is a challenge) because it had once been beautifully played by the late Belle Bennett in the first version.  In fact, it was a double challenge because the role had to be played on two levels, almost making Stella two separate women.  On the surface, she had to appear loud and flamboyant–with a touch of vulgarity.  Yet while showing her in all her commonness, she had to be portrayed in a way that audiences would realize that beneath the surface her instincts were fine, heartwarming and noble.  Part of her tragedy was that while she recognized her own shortcomings, she was unable to live up to the standards she so painstakingly set for herself.

The story of her life was a study of mother love and of devoted sacrifice.  Her ambitions for her daughter, Laurel, were so great and yet so utterly unselfish that she finally cut herself completely away from her child so that Laurel could attain the kind of life Stella wanted for her.  She realized that she would be a discordant note in any attempt Laurel could make to achieve that kind of life.

Stella’s tastes were cheap, her clothes loud, her manners crude.  It was only as she grew older that she faced the realization that what she had thought were smiles of appreciation were actually smiles of tolerance, pity or contempt.  To spare her daughter the humiliation of a mother with such surface commonness, Stella deliberately planned an affront which would leave Laurel free of any feeling of responsibility for her.

There is a point in portraying surface vulgarity where tragedy and comedy are very close; that thin dividing line had to be watched carefully.  The characterization I gave had to be clear so that all the facets of Stella–a great woman in spit of jangling bracelets and bobbing plumes–were never confusing to the audience.

My Stella Dallas grew under the sensitive direction of King Vidor, and was aided by the warmth and brilliance John Boles and Anne Shirley brought to their roles.  Anne played the exquisite Laurel very sensitively.

My favorite scene in the movie was the one where Stella Dallas stands by a rail outside a church as Laurel is being married to her well-born fiancé.  I had to indicate to audiences, through the emotions shown by my face, that for Stella joy ultimately triumphed over the heartache she had felt.  Despite her shabbiness and loneliness at that moment, there was a shining triumph in her eyes, as she saw the clumination of her dreams for her daughter.

While women identified with Stella Dallas ans suffered for her and with her, I like to feel that she was a woman who cheated failure.  One who eagerly paid the full measure for what she wanted from life.

Some people may consider such a theme and such a character sentimental.  But I think one must distinguish between sentimentality and honest sentiment.  The theme of Stella Dallas–a mother’s love and self-sacrifice–when properly handled in any medium is never maudlin, never dated.  I still receive letters from fans seeing the film for the first time, either on television or at one of the various film festivals, and their comments make me doubly proud of the fact that I was fortunate enough to play this once-in-a-lifetime role.

So much of her character is in the distance between the real (Ruby Stevens, born in 1907 in New York) and the  professional names.  If ‘Barbara Stanwyck’ is the woman of the world, sophisticated, ruthless and fierce careerist, the lady generally smothering the moll in herself, then ‘Ruby Stevens’ is the girl from the wrong side of the tracks, hard outside and soft inside, generous but ambitions: the girl in burlesque who can masquerade as a lady when the chance offers.  Time and again, her best work falls within this range, displaying her sliding emotional, social and moral scales.

Stanwyck is more intelligent, warmer and a good deal tougher than Joan Crawford, whose work show certain similarities to hers, and she is always more interesting and entertaining to watch.  The manner of her survival, no matter if often undercutting melodramatic and romantic material, is a vindication of the personality and attitude she has accumulated in her films.  There is not a more credible portrait in the cinema of a worldly, attractive and independent woman in a man’s world than Stanwyck’s career has revealed.  In middle and old age, her looks distilled into narrowed eyes and silver hair; thus it is worth insisting that in the 1930s and 1940s she was delectable, a stirring mixture of toughness and sentiment, a truly and creatively two-faced woman.