The small town has been the locale of many a film, since much of the film audience was traditionally found there, and perhaps still is, in these days when the “community standards” of the bumpkin are imposed upon the metropolis, though the good burghers of Peoria or Brampton have become less and less the audience to whose values the filmmaker makes his pitch.  From the days of True Heart Susie and Tol’able David, however, to Tender Mercies and Cross Creek, small-town life has symbolised a pre-industrial America, sequestered from the ills of urban civilization.  It seems unlikely–and we are most of us hicks at heart–that Variety‘s famous headline of the late-’20s will ever be true–“HIX NIX STIX PIX.” 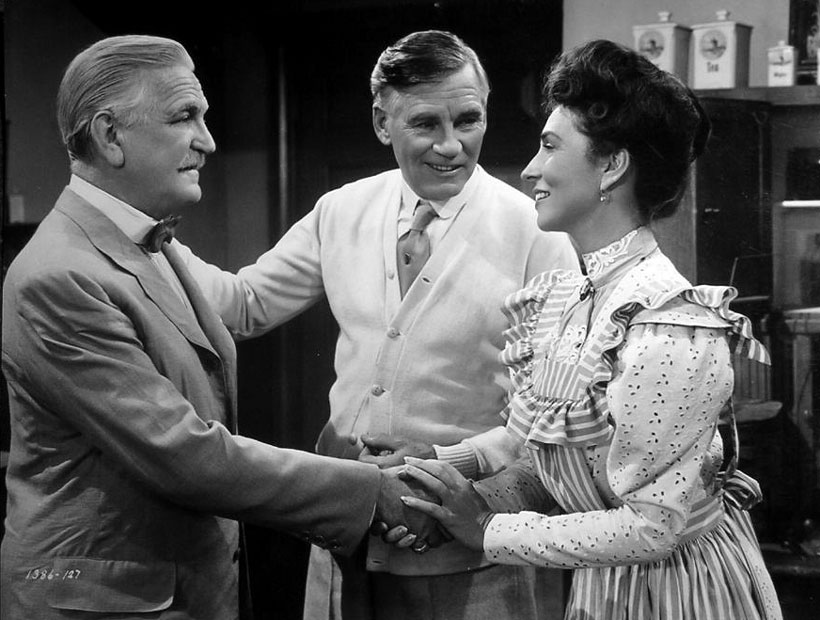 This afternoon’s two films represent the light and the dark sides of the small town, Summer Holiday evoking a summery, Fourth-of-July, Tom Sawyer rurality, and Kings Row a quite different, autumnal, Gothic, Faulknerian picture. Where Summer Holiday is very much in the vein of Our Town, The Human Comedy, and the Andy Hardy series (with the star of the latter two its star as well), King Row belongs with Shadow of a Doubt (written by the author of Our Town), Flamingo Road, and, much later, Peyton Place.  The ultimate paradox, perhaps, is that the nostalgic and sentimental Summer Holiday originated in the dark and brooding genius of Eugene O’Neill, and that the lightly affable and genial screen persona of Ronald Reagan made its most memorable appearance amid the dark nastiness of Kings Row.

O’Neill’s only extended comedy, Ah! Wilderness, reached the stage in 1933, just before he seemed to fall silent, though actually writing his last great works, including Long Day’s Journey into Night, which looks at the O’Neill family circle from a rather different perspective.  Ah! Wilderness, the comedy of a boy’s growth to manhood in a small Connecticut town at the turn of the century, was quickly made into a film, with Lionel Barrymore as Nat Miller, the understanding newspaper editor and father, a part played on the stage by both George M. Cohan and Will Rogers.  A fifteen-year old Mickey Rooney played the youngest member of the family, and the film was directed by Clarence Brown, who would later make at least three other similar fables of adolescent initiation: The Human Comedy, National Velvet, and The Yearling.

Ten years later, Arthur Freed, the midwife of many of MGM’s great musicals, hired Rouben Mamoulian to make a musical film, and proposed Ah! Wilderness as the basis.  Difficulties quickly arose between the producer of such notable but conventional musicals as Meet Me in St. Louis, and the strong-minded director of such early-sound classics as Applause and Love Me Tonight, in which the songs are part of the basic narrative structure, rather than mere set pieces.  Mamoulian seems to have carried his point, with the authority of one who had produced four Broadway musicals in the past five years, including that great landmark Oklahoma!, though there are obvious touches of Freed and his masterpiece in Summer Holiday, most remarkably in the Stanley Steamer (remember the Trolley?) song.

But one result of these difficulties between producer and director was that MGM held back Summer Holiday, which was made in 1946, until mid-1948, when it was widely dismissed by the critics and ignored by the audiences.  The New York Times, for instance, ended a bad review with a distinct piece of faint praise: “it may do for casual summer fun.”

Summer Holiday is more than that, a wonderfully moving and nostalgic work, “an exact evocation of the mood of a dead past”–which was the way O’Neill described his original play.  Yet it is not in the least mawkish.  The opening sets the tone of the film in its perfect integration of song and narrative, even more successfully than the similar, and undeniably brilliant, opening of Love Me Tonight–as Nat Miller introduces us in song and recitative to “our Town” (!), and the hymn to Danville is taken up, as the camera moves or cuts to each of the main characters: an astonishing example of filmic exposition hidden under an affect of light entertainment.

But the greatest delight of Summer Holiday is surely the set pieces of middle Americana: the Graduation Ceremony, the Independence Day picnic.  It is in the first of these that one sees Mamoulian’s lovingly skeptical attitude towards these patriotic exercises, as the children march to the commencement amidst the icons of American mid-culture, and the camera cuts away to a series of vignettes based on the familiar visuals of the likes of Grant Wood and Thomas Hart Benton.  American Goth in through one clear and one rose-coloured glass.

If Summer Holiday calls forth President Ronald Reagan’s vision of America, Kings Row, actor Ronald Reagan’s most esteemed picture, represents the real American Gothic.  Here is the viciousness and perversion that goes on behind the closed doors of the small town: sadism, torture, homosexuality, incest (and in the book euthanasia): all the standard activities of those latter-day small towns of Knot’s Landing, and the outlying spreads of Dallas. 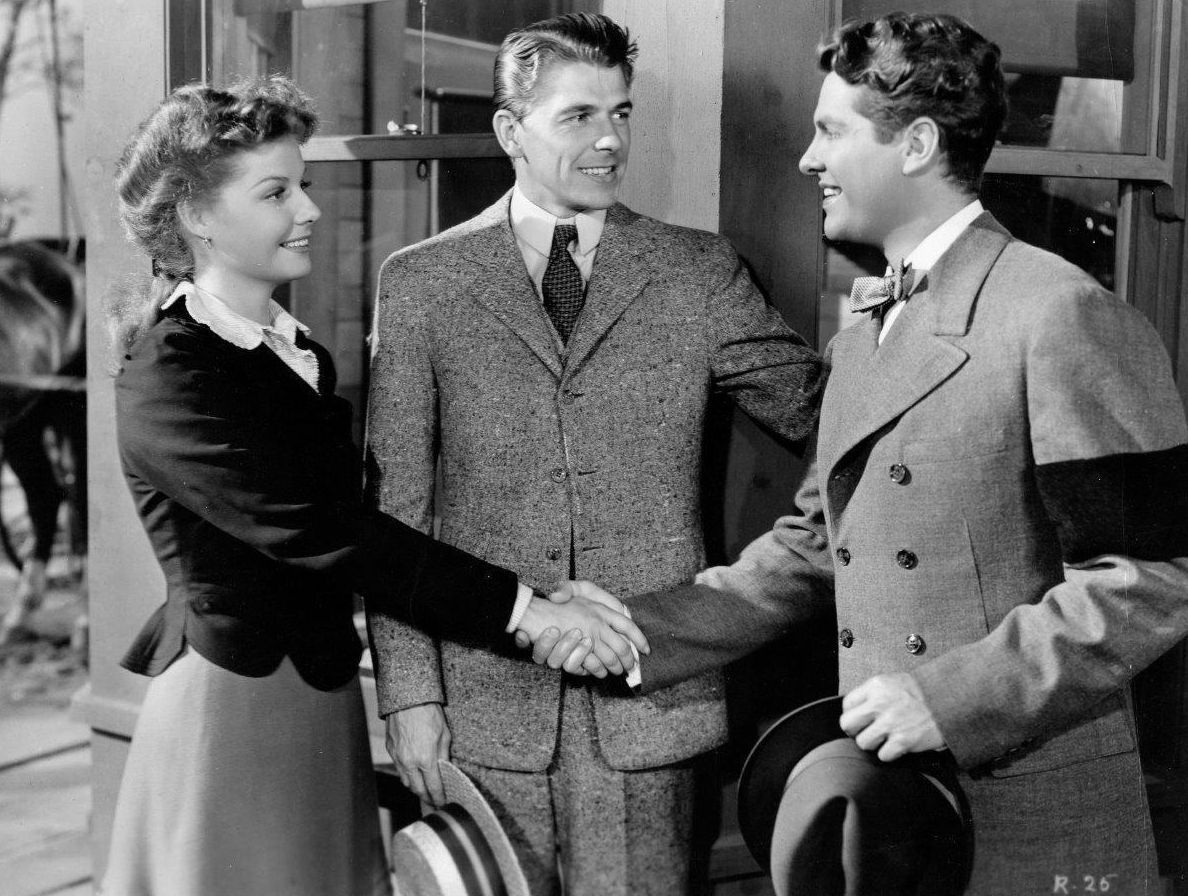 Henry Bellamann’s Kings Row had been a runaway, and very racy, bestseller in an America drifting towards war in the summer of ’41.  Hollywood quickly filmed it, the only delay being in getting around the Code, and Warners considered at least six other actors, including Jack Carson, Robert Preston, and Franchot Tone, before turning to one of their most reliable light leading men, Ronald Reagan, for the important role of Drake McHugh.  The leading role in the film is played by Robert Cummings, of whose performance Bosley Crowther said he “looks and acts like a musical comedy juvenile trying to find his bearings in a heavy Ibsenesque part” (the studio had wanted Tyrone Power).  But because of Cummings’ inadequacies, Kings Row has come to be thought of as Reagan’s picture, and this despite strong performances from Judith Anderson, Claude Rains, and Charles Coburn (cast against type, and never more villainous).  Ann Sheridan, in the third of their four appearances together, supports Reagan ably.

As a screen actor, Reagan had basically two personas, the easy-going optimist and the civic-minded, sometimes stodgy, hero.  It is the first persona that predominates in Kings Row.  (Jack Warner’s famous mot–“no, no, Jimmy Stewart for Governor; Ronald Reagan for Best Friend”–refers only to the first, and overlooks the second, perhaps more important, persona.  And so do the armchair academics who deplore the presence of an actor in the White House.  Reagan’s ineptitudes as an actor argue that he played himself throughout his acting career, and has brought together the two principal personas in the optimistic civic-mindedness now projected large on all our consciousnesses.) 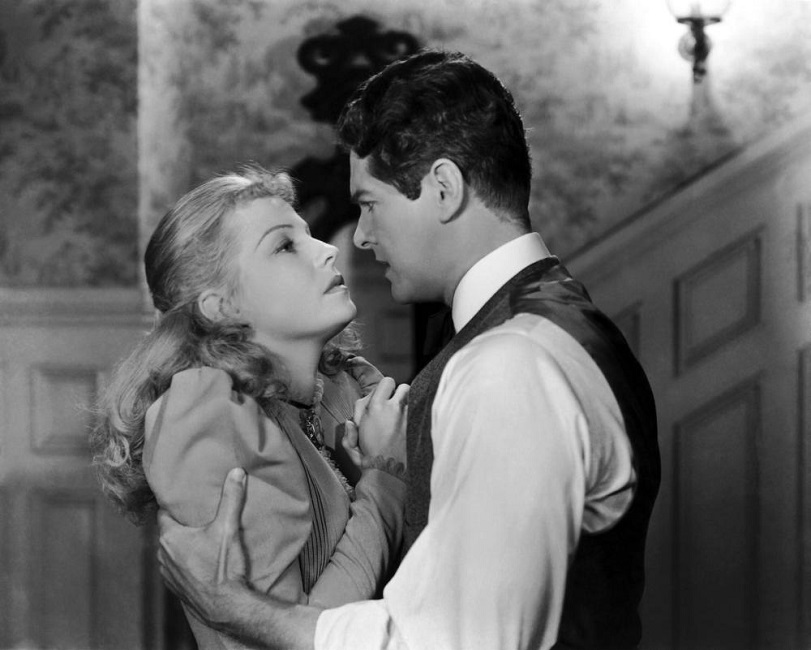 As Cam Tolton wrote in the programme notes for a Reagan Festival at the U. of T. three years ago (an occasion to be repeated there on the weekend before the election this November), one of the more remarkable aspects of Kings Row is “the imbalance between the track-records of its distinguished behind-the-camera crew and its relatively light-weight cast.”  Sam Wood was a solid director whose name might have appeared on Gone With the Wind, and did appear on Goobye Mr. Chips, Kitty Foyle, The Pride of the Yankees, and–Our Town.  William Cameron Menzies, one of Hollywood’s legendary decorators, had also worked on GWTW and Our Town.  Casey Robinson had been writing screenplays for twenty years.  James Wong Howe was no less legendary than William Cameron Menzies.  And Erich Wolfgang Korngold had already won two Oscars, for the scores for Anthony Adverse and The Adventures of Robin Hood.

From all this talent, and the mysterious cinematic alchemy that Warners more than once produced (Casablanca) out of unpromising material, came Kings Row, a classic film of a vintage year.  It was one of the top-grossing films for 1941-2, and was nominated for Best Picture, Best Director and Best Photography–losing in all three categories to Mrs. Miniver.  That year, too, a special award went to MGM for–in the Andy Hardy series–“its achievement in representing the American way of life.”  Kings Row was emphatically not in line for such an award, but six years later, in a postwar, retrospective America, Summer Holiday might have been.