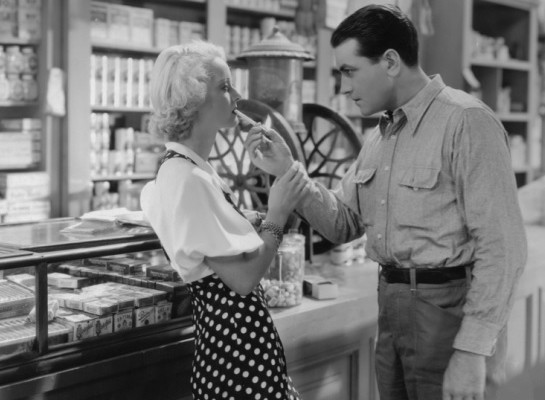 Toronto Film Society presented Cabin in the Cotton (1932) on Monday, October 29, 1979 in a double bill with All This and Heaven Too as part of the Season 32 Monday Evening Film Buff Series, Programme 2.

Cabin in the Cotton, tonight’s first film, found Richard Barthelmess near the end of a very successful career, mainly in silent features, and Bette Davis at the beginning of what must be one of the most brilliant and ever ongoing careers in film history.  This was Richard Barthelemss’ last big film and he correctly characterized many of his roles including the one in tonight’s film when he said: “I have become the screen’s champion underdog.”  In her autobiography The Lonely Life, Bette Davis comments: “Richard Barthelmess had been a great silent star but his technique was utterly foreign to me.  He did absolutely nothing in long shots, followed basic stage directions for medium shots and reserved his talent for the close-ups.  When he was not being photographed, he relaxed in his dressing room.”

Miss Davis did not get much help from her director, Michael Curtiz.  Curtiz was a hard, efficient and fast worker who seldom allowed himself the luxury of any social contact, and often expressed contempt for those who worked to live, as opposed to one such as himself who lived to work.  He was given a good deal of publicity for his ‘Curtizisms,’ which are another form of ‘Goldwynism.’  Some of the phrases attributed to the Hungarian Curtiz are: “This scene will make your blood curl”; “The pinochle of his career”; and, of course, his hilarious request during the shooting of The Charge of the Light Brigade, when, referring to the riderless horses he cried, “Bring on the empty horses!”

Again quoting from her autobiography Miss Davis comments: “The director, Michael Curtiz, did not want me for the part and made it clear.  But Mr. Zanuck did and made it clearer.  My director made my life hell every day.  While Mr. Barthelmess was easygoing and kindly, I would start a scene and Curtiz would mutter behind the camera so I could hear, “Goddamned nothing no good sexless son of a bitch!” which might have little taste and less syntax but a great deal of lucidity.  What with Barthelmess’ wife, Jessica, sitting behind the director appraising our love scenes and Curtiz’ heckling, it is a wonder I made it.”  Surprisingly, the actress and director agreed to work together in five more films–and with great rapport.  The reason, perhaps, was due to the professionalism of Miss Davis, and the critical acclaim she received for her role in Cabin in the Cotton.

Cast for the first time on the screen as a ‘bad’ girl, Bette Davis displays flashes of the brilliance with which she was to infuse some of her best work.  Her big scene occurs when she seductively sings ‘Willy The Weeper,’ an old folk song which Cab Calloway later made into ‘Minnie The Moocher.’  Although she is offscreen for much of the time, hers is the performance one remembers, so vital and imaginative.  It was this performance which caused John Cromwell to give her the role that made her (Mildred in Of Human Bondage).  Sweeping all before her, audience and poor Barthelmess respond with admiration and delight to this sparkling Southern belle when she says: “Ad’d love t’kiss yo, but ah jes washed mah hayah!”