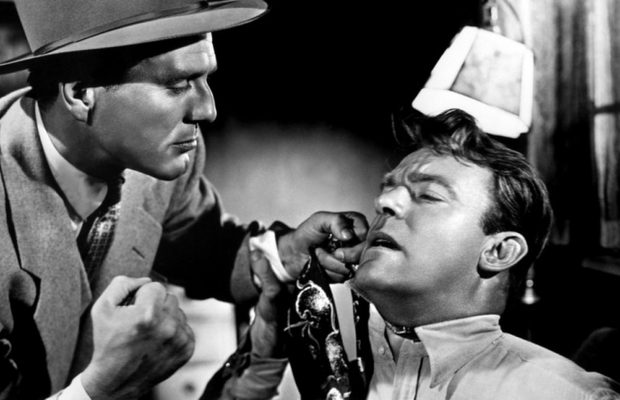 “This is what I really call my first film.  I was responsible for its story, for its structure, its characters and for actually making it.  This was my first real break towards being able to make films the way I wanted.”  Anthony Mann.

Max Alvarez wrote the following in his book, The Crime Films of Anthony Mann.  Although this was Anthony Mann’s fourteenth film, T-Men is his first breakthrough commercial success, his first collaboration with cinematographer John Alton, his first use of extensive location photography, his first motion picture to garner sufficient critical acclaim and his first to open commercially in France.  It even received an Academy Award nomination, the second for a Mann picture, for Best Sound for Jack R. Whitney.

T-Men is a cohesion of three different popular crime drama styles of the time period.  The “semi-documentary” was a narrative movie style striving for authenticity through the incorporation of newsreel techniques using impersonal, authoritative narration, and vivid location filming.  By taking cameras outfitted with black-and-white film stock, which was the epitome of 1940s newsreel realism, to actual localities where true stories occurred, wartime and post-World War II moviemakers believed they could combat conventional studio artificiality.  T-Men was not the first film to apply this semi-documentary technique, which Mann acknowledged back in 1947.

In addition to a semi-documentary, T-Men is what the French call a film policier.  The heroes of the story are Treasury agents whom we observe taking meetings at law enforcement agencies, researching their assignments, and secretly passing on the results of their undercover work.

Finally, T-Men becomes a film noir when the criminals take centre stage, conspiring, torturing and murdering in an atmosphere of oppressive shadows, blinking neon, and all-encompassing camera angles.  The fact that the film avoided depicting the “fancy-pants night club life” of other contemporary crime thrillers won it praise from the Communist Party newspaper, The Daily Worker.

In grouping together the semi-documentary, the film policier and the film noir, T-Men cannot avoid becoming lopsided and there are times when one is interfering with the other.  Typical of the shortcomings is the narrator stating the obvious during a superbly cinematic scene hardly in need of verbal embellishment.  At the same time, the picture seldom releases its grip on the viewer.  The Eagle-Lion Films publicists were not exaggerating when they assured theatre owners that “it hits…and hits…and hits—like a piledriver!”

On its release, the film was generally classed as a “semi-documentary” because of its use of actual locations in Los Angeles and Detroit, though it is more commonly thought of nowadays as a classic example of film-noir. The two leads (O’Keefe and Genaro) are Treasury agents (“T-Men”) who go undercover in Detroit and then Los Angeles, in an attempt to break a US currency counterfeiting ring. They join the gang by posing as counterfeiters from out of town, but one of them is killed by the gang while the other can only watch in horror.

Bosley Crowther of The New York Times praised the film as “a cops and robbers film in this new ‘semi-documentary’ format which, for action, is one of the best…it does have a look of reality not often encountered in such films, and Anthony Mann has directed the action, of which there is more than enough, with a fine sense of melodramatic timing and a good eye for sharp, severe effects.” A contemporary critic agrees that “it brought to wider attention the immense skills of director Anthony Mann”, while “John Alton’s brilliant camerawork makes the mise-en-scène dramatically grander than the matter-of-fact tone of the narration.”

Although the film was a success, it led to a breach between the co-producers Eagle Lion and Small, as the latter was unhappy with the way his contribution was minimised in the advertising.

Born Emil Anton Bundesmann. He began as an actor in off-Broadway plays, then moved to Hollywood in 1938, where he joined Selznick International Pictures. Mann became an assistant director in 1942, and made low-budget films for RKO and Republic. He directed a series of B-pictures in various genres from 1942 to 1946 before beginning to produce thrillers and films-noir, which began to attract critical attention. With films like Strangers in the Night (1944) and Strange Impersonation (1946) he showed an interest in revenge melodramas that were followed up in the westerns that he began to make with Devil’s Doorway, The Furies, and Winchester 73 (all in 1950). He then specialised in westerns for most of the 1950s, creating a series of masterpieces that compete for quality with the work of John Ford and Sam Peckinpah. Mann made five of these films with James Stewart, creating a whole new persona for the actor–from the amiable and thoroughly decent bumbler of his earlier films to a far darker and more ambiguous hero, capable of rage, cynicism, and ruthlessness. This was partially foreshadowed in Stewart’s scenes in It’s a Wonderful Life, of what Bedford Falls would have been like if George Bailey hadn’t lived, and was followed up to some extent by Hitchcock in Rear Window and, especially, Vertigo. The Tin Star in 1957 starred Henry Fonda rather than Stewart, but also transformed the actor’s wholesome and positive personality into something more sinister that in turn was followed up by Sergio Leone in Once Upon a Time in the West.

Mann’s later career produced two of the finest Hollywood epics, El Cid (1961) and The Fall of the Roman Empire (1964), and some war films–Strategic Air Command (1955), Men in War (1957), and The Heroes of Telemark (1965). He was hired as the original director of Spartacus, but fell out with Kirk Douglas and was replaced by Stanley Kubrick after, reputedly, filming the gladiator scenes. He died while filming A Dandy in Aspic in 1967, and the film was completed by its star, Laurence Harvey.

Born Edward Vance Flanagan to Irish vaudeville artists working in the US, he joined his parents in their act while still a small child. He started in films as an extra in the 1930s, calling himself Bud Flanagan, but was renamed Dennis O’Keefe when he joined MGM in 1937. He left MGM in 1940 and worked in mostly lower budget productions, usually as a tough guy in action and crime dramas. His best-received role was in The Story of Dr. Wassell in 1944, and he made Raw Deal and T-Men with Anthony Mann. From the 1950s onwards he worked mostly in television.

Born Johann Altmann in the Austro-Hungarian Empire. He made over one hundred films as the director of photography, first in South America in the 1930s and then in Hollywood, where he was considered one of the finest cameramen in the industry, particularly noted for his work in films-noir for Anthony Mann and others. Titles include T-Men, Raw Deal, and Devil’s Doorway (all for Mann); The Big Combo, and colour films such as Slightly Scarlet and An American in Paris (for which he won an Academy Award for the ballet sequences). His book Painting With Light was very influential for later cinematographers.

For at least one critic, “The overall look of T-Men is the real standout star. John Alton had a true gift for incorporating a tense dichotomy of light and dark in the same frame. His use of shadow often changes men into menacing silhouettes. But he also integrated daring strokes of light against these black figures, giving glimpse enough of their eyes, for example, to be reminded of their humanity (or lack thereof).” He also praises Alton’s use of oblique and unusual angles to film the action, and “his simple yet brilliant decision of camera placement” in certain scenes, and his masterful use of “deep focus shots, reflective surfaces, camera movement and many other techniques, concluding that “if anything, the visuals alone secure T-Men among the elite titles in the film-noir canon.”