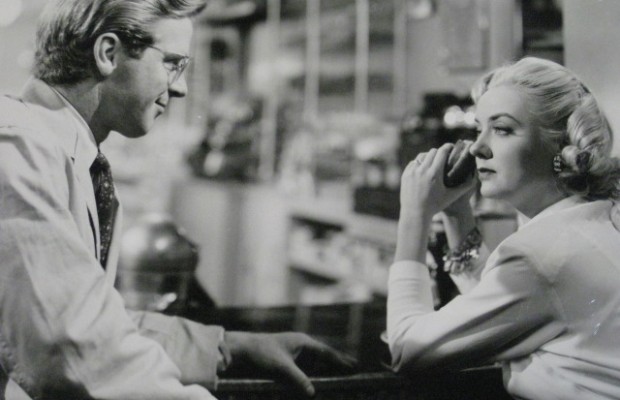 “Tension” lives up to its title.  It’s a tight, tersely stated melodrama that holds the attention, well-written and played to give ticket buyers in the general situations their money’s worth.  An excellent twin bill feature for either; top or bottom booking.

Mood created by the Allen Rivkin script and John Berry’s direction is taut, adding value to the story by John Klorer.  Pace moves forward smoothly and the players realize ably on the varied characters that make up this melodrama.  Framing it all is a topnotch production dressing by Robert Sisk.  Not lavish, but accurately valued for the story and settings.

Plot has Richard Basehart, drugstore manager married to wicked Audrey Totter, plotting a perfect murder to do away with his wife’s lover, Lloyd Gough.  He creates himself a new identity and carefully shapes his crime so that no suspicion will be cast on him.  However, at the last moment he can’t go through with it.  Gough is killed anyway, by Miss Totter, the finger is pointed at Basehart’s other character, but devious police work by Barry Sullivan and William Conrad succeeds in trapping the pistol-toting femme menace.

Rivkin’s script wraps smart dialog and situations around the plot to make it play very well and Berry’s direction keeps it always on the move and the cast showing to advantage.  The characters have the quality made popular in fiction by Raymond Chandler and James M. Cain—virile men and well-rounded femmes—and stressing of these factors adds interest.

Basehart turns in a thoughtful performance and Miss Totter gets all the meaning of her character into the portrayal.  Cyd Charisse is charming as the girl whom Basehart meets during the establishment of his new identity.  Sullivan’s police work has good authority, larded with excellent dialog lightness.  Gough does well by his heel assignment, while Tom D’Andrea, Conrad and Tito Renaldo round out the capable casting.

Andre Previn’s score adds considerable point to the melodramatics, as well as sharpening the light touch with which some of the scenes have been treated.  An ace lensing job by Harry Stradling and crisp editing by Albert Akst are among the other good credits.

TENSION, screen play by Allen Rivkin, based on the John Korer story; directed by John Berry; produced by Robert Sisk for Metro-Goldwyn-Mayer.  At the Rialto.

At the beginning of the film called “Tension,” which came to the Rialto yesterday, a fellow, introduced as a detective, addresses the audience privately. He says that the job of a detective is mainly one of finding out the strong and weak sides of people suspected of crimes and then applying tension thereto. “Everybody,” he tells the audience, “has got a breaking point. And when they’ve been stretched so tight they can’t take it any more”—— He demonstrates by snapping a rubber band.

In a manner of speaking, this picture, produced by M-G-M, is a test of the gentleman’s thesis, for it makes a most grueling assault, in a long and exhausting exhibition, upon the audience’s breaking point. But we can’t rightly say that the pressure is of a notably tensile sort. In telling about the involvements of a young druggist whose wife runs away with an obviously shady character, who along about the middle of the picture, gets killed, it rambles from one thing to another in a most unsuspenseful way and ends with a shattering revelation which you can see coming a half-hour in advance. And in this demonstration, a capable cast plays roles which require that resemblance to people—human people—be distinctly eschewed.

A much better title for this picture would be “Patience,” presuming such a thing. As for our own reaction, we felt like that rubber band.