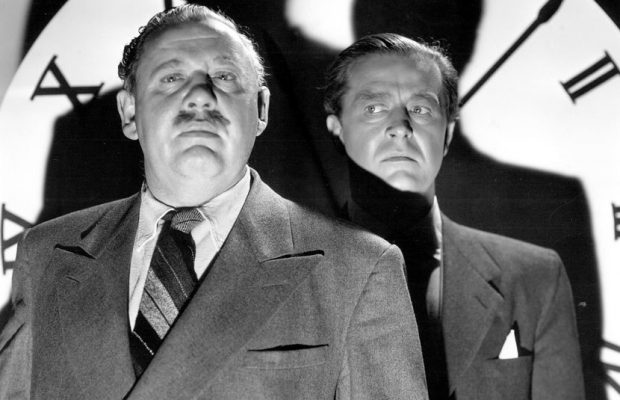 Toronto Film Society presented The Big Clock (1948) on Monday, September 26, 1988 in a double bill with Act of Violence as part of the Season 41 Monday Evening Film Buffs Series “D”, Programme 1.

With this film, we have the chance to see the original version of Kenneth Fearing’s novel, which was remade as No Way Out (starring Kevin Costner) in 1987.  In the new production, only the general plot was retained, with the setting being changed completely.

Ray Milland plays the typical film noir protagonist, trapped in a web of circumstance that he must extricate himself from or perish.  He plays a go-getting, workaholic editor employed at a sensational crime magazine; his specialty is finding missing persons and producing a story for the magazine about them.

Milland’s troubles begin when he goes to the apartment of Laughton’s mistress for a drink, then leaves just before his boss shows up.  There is a quarrel.  Then, remembering the glimpse Laughton had caught of Milland leaving his mistress’s apartment, sends the editor on an intensive hunt to find and identify the missing witness–himself!  The subsequent intrigue turns into a life-and-death battle of wits between Laughton and Milland.

The clock of the title is a huge monstrosity in the lobby of Laughton’s office building.  It sets the theme of “time running out”.  In common with many film noirs, the story is told in flashback, as Milland muses that only 24 hours earlier his life was in perfect order.  His ironic search for himself forces him to question the possibility of his own moral guilt, and he feels convicted.  As his life sseems to close in on him, he casts a cold eye on his marriage and his job, by both of which he feels trapped.

Milland was a good choice for the ambiguous lead character.  A fine actor, with a buoyant charm when he cared to display it, Milland had a peevish and sarcastic side to his persona, one lacking in warmth; one sensed he could be a rather unpleasant person without half trying.

Laughton, who often specialized in playing scenery-chewing, larger-than-life characters, must have had a great time as the magazine publisher.  Probably his best scene in this picture is when he makes a confession to his ever-loyal assistant, played by the excellent character actor George Macready.  Basically, Laughton was playing Emperor Nero in a double-breasted business suit.

The Big Clock is very much a film of its time–and what a great time it was for movies of this type!