Toronto Film Society presented The Blue Dahlia (1946) on Sunday, October 21, 2018 in a double bill with Side Street as part of the Season 71 Sunday Afternoon Film Buffs Series, Programme 2.

Toronto Film Society presented The Blue Dahlia (1946) on Monday, January 31, 1983 in a double bill with The Postman Always Rings Twice as part of the Season 35 Monday Evening Film Buffs Series “B”, Programme 6.

Visually, this is one of Ladd’s more interesting films.  It is full of the kind of background settings and atmosphere that lend a feeling of the tacky, postwar world the story occupies.  The film is fast paced, and there are plenty of memorable scenes, but they cannot quite bring the picture into the category of first-rate screen fare.  There are too many coincidences, too many broken threads of plot to pull together, and The Blue Dahlia seems both slickly sophisticated and at the same time oddly oversimplified.  There is evidence that Raymond Chandler had another ending in mind altogether and that when the Navy Department protested that they did not approve of his choice, he scrambled to find a new patsy.

Lake’s role is superfluous to the plot—she is there simply to provide the obligatory love interest for Ladd and another suspect for the murder.  Since she is barely noticed by the Chandler script, we are at a loss to know why she seems so interesting a type.  Chandler thought Lake a dreadful actress and dubbed her “Moronica Lake”, but she certainly made more of the part of Joyce Harwood than he gave her.

Perhaps the best acting in the film rests in the skills of Howard da Silva.  Bendix was also fine as the stammering vet with a plate in his head.  Ladd’s performance was solid, controlled, entirely suitable.  Johnny, like so many of Chandler’s best heroes, is tough, resilient, and true to his own firm code of morality, a man who will not admit to needing anyone and who gains audience sympathy by his very aloneness.

Manny Farber in The New Republic stated, “Chandler makes the mayhem, drinking and talking stylized and arty; never allows his gangsters to lose their suavity, presence of mind, grace, sartorial elegance, wit in any kind of catastrophe….  The film is well acted from top to bottom and especially in the in-between roles.”

When Paramount had bought The Blue Dahlia (the title referring to the name of a café), it was an unfinished manuscript of a novel, about one hundred twenty pages long.  So, with a substantial portion of the work completed, and with the knowledge that it would be Alan Ladd’s next vehicle, Chandler was able to turn in half his screen adaptation in three weeks and include the kind of material that would fit Ladd’s personality and temperament.  The role of Joyce Harwood, the sympathetic, all-helpful blonde, was tailored to showcase Veronica Lake without putting too great a burden on her capacities.

William Bendix was reunited with Alan Ladd for the fourth time—and upped to star billing—in the role of his “slug-nutty pal.”  And Howard da Silva, Doris Dowling and Frank Faylen, represented as “the three famous finds from The Lost Weekend,” completed the cast.  For insurance the studio created a provocative advertising campaign that read: “CROSS LADD…AND YOU’VE DOUBLE-CROSSED YOURSELF!  Fool around with Ladd’s woman…and you’re a fool!  For Ladd’s gun and Ladd’s fists say you can’t get away with that, brother—not in his territory!”

This may have had very little to do with the movie, but it certainly enhanced the Ladd image, and The Blue Dahlia was considered a “can’t lose” from the day it went into production.

Perhaps the only downbeat note came from Chandler, who, less than enthusiastic about Alan Ladd, remarked, “Ladd is hard, bitter, and occasionally charming, but he is, after all, a small boy’s idea of a tough guy.”

Chandler not withstanding, filming of The Blue Dahlia went smoothly.  Ladd and Lake continued to maintain their aloof but friendly rapport, and Ladd and Bendix worked well together, although their earlier offscreen camaraderie was missing.

Through it all, Alan remained true to his insecurities.  Tailor-made for him though The Blue Dahlia might be, his old feelings of inadequacy were intensified by a conviction that he was being taken for granted by the studio…after all, his weekly salary was not on par with his ratings on the popularity polls, nor with the fortune his films were making for Paramount.  So, with his wife’s encouragement, he rebelled, telling his bosses that he was quitting movies entirely and would take up ranching as a full-time occupation—unless some changes were made.

And I guess they were, since he went on to make another 41 films over the next 18 years.

Referenced from Ladd: A Hollywood Tragedy by Beverly Linet (1979); The Films of Alan Ladd by Marilyn Henry and Ron DeSourdis (1981) 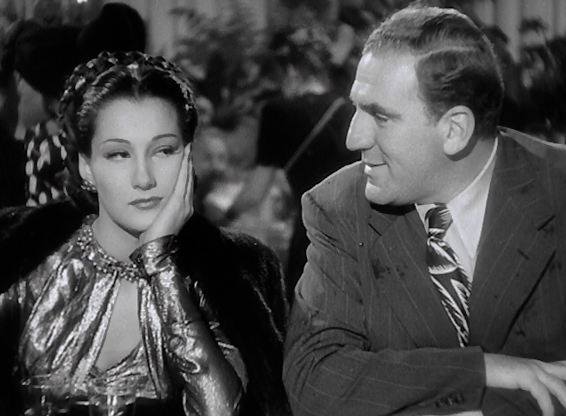 The Blue Dahlia and The Postman Always Rings Twice are two examples of what French motion picture critics have dubbed “Film Noir—Black Film”. Briefly, the term applies to a certain type of American drama which flourished during the 1940s and early-1950s. These pictures were generally somber and pessimistic in tone, marked by a startling cynicism and often ending in defeat. These downbeat stories of murder and passion; of ordinary lives gone hopelessly astray; of men caught in webs by beautiful and scheming women comprise some of the most eerily fascinating films of all time. In “Film Noir”, the action often takes place at night, in the rain-slicked streets and luxury apartments, back alleys, and tenements of the American city.

The Blue Dahlia was based on an original screenplay by Raymond Chandler, one of America’s finest mystery writers. Basically, the story involves the efforts of Ladd to clear himself of suspicion of having murdered his unfaithful wife. As Johnny Morrison, Ladd gave one of his typically solid, controlled performances. He was again partnered with the sexy Veronica Lake of the world-famous peek-a-boo hair. She had co-starred with Ladd in his first major film, 1942’s This Gun for Hire, and Paramount, recognizing the screen chemistry between the two, frequently cast them together. William Bendix, a New York born actor with considerable stage experience, was, with his characteristic Brooklyn accent, a notorious scene stealer. In The Blue Dahlia, he has ample opportunity for this as Ladd’s Army buddy whose war wound causes him to periodically lose control. Howard da Silva is fascinating as the played-out, dapper, reluctant underworld figure who knows he must lie in the bed he has made for himself.

The film contains some wonderfully atmospheric, typically Film Noir scenes of wet streets reflecting neon and car lights, as well as the gritty reality of Los Angeles’ less attractive settings—seedy hotels, stucco bungalows, and tacky motels. The scene played out in the confines of Lake’s convertible is pure Ladd/Lake chemistry; the sort of moment that explains their phenomenal popularity as a team. It’s interesting to note the presence of John Houseman as co-producer. The British-born Houseman was earlier affiliated with Orson Welles’ Mercury Theatre. He produced Joseph L. Mankiewicz’s Julius Caesar in 1953 and, more recently, turned to acting, in such films as The Paper Chase (1973) and Ghost Story (1981).

This film is the type of production—a thriller—and role—the tough guy—with which Alan Ladd was most strongly identified in the 1940s. As an actor, he was plagued with insecurity and self-doubt and for most of his career, like Clark Gable, seldom reached his potential in the routine roles assigned to him. However, like Gable, fortune smiled on Ladd for one golden moment, giving him the role of a lifetime. For Clark Gable, in 1939, it was Rhett Butler; for Alan Ladd, in 1953, it was Shane.