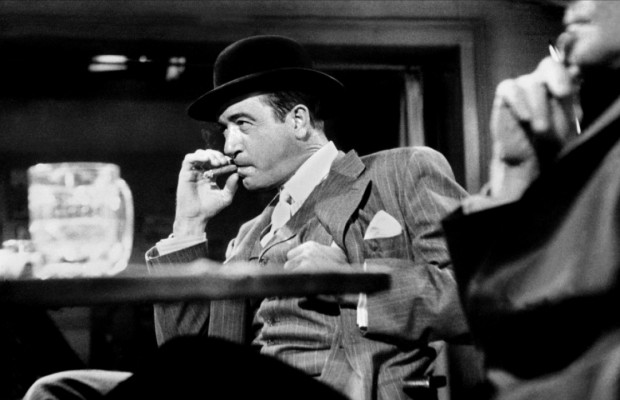 Toronto Film Society presented The Boss (1956) on Sunday, January 24, 2016 in a double bill with The Enforcer as part of the Season 68 Sunday Afternoon Film Buff Series, Programme 4.

The Boss is based on the historic figure of Thomas J. Pendergast (1872-1945).  Born in a small town in Missouri, Pendergast came to Kansas City to work for his brother Jim, who controlled the local Democratic Party.  After his brother’s death, he built an impressive financial empire with companies such as Ready Mix Concrete, which were naturally awarded lucrative government contracts.  Pendergast’s control over large blocks of votes enabled him to push through favoured political candidates.  No less than a future President of the United States, Harry S. Truman, benefited from Pendergast’s support when he was elected to the Senate in 1934.  While Pendergast no doubt profited immensely from his corrupt regime, in some respects the rest of Kansas City did as well.  Its economy was not hit nearly as hard by the Great Depression as many other cities, thanks in part to the well-oiled machine Pendergast operated.  He was finally brought down in 1939, when a tip-off to a bribe resulted in a massive investigation by the Internal Revenue Service and a fifteen-month prison sentence for Pendergast, thus ending the career of one of the most powerful political bosses of the era.

Established screenwriter Ben Perry allowed his name to be used to provide a cover for Dalton Trumbo (1905-1976), who was still subject to the blacklist.  As one of the ‘Hollywood Ten,’ Trumbo was sentenced to several months in jail for refusing to testify before the House Un-American Activities Committee and was subsequently blacklisted by the film industry.  After living in Mexico for a period of time, he returned to the US, writing a number of scripts under pseudonyms, mostly for lower-budget and independent productions.  The first of these was The Boss.  Things came to a head when, as “Robert Rich,” he won the Academy Award for Best Screenplay for The Brave One (1956), thus embarrassing the entire industry.  By 1960 he at last received proper screen credits for his work in Spartacus and Exodus, making him the first screenwriter to publicly defeat the blacklist.

Today director Byron Hsakin (1899-1984) is perhaps best known for his science fiction and action films, most notably the Walt Disney production of Treasure Island (1950), The War of the Worlds (1953), From the Earth to the Moon (1958) and Robinson Crusoe on Mars (1964).  Starting out as a newsreel cameraman after World War I, he became a cinematographer for feature films, including John Barrymore vehicles such as Don Juan (1926), then directed a few films of his own before returning to cinematography and special effects work, arguably his greatest strength.  His development of the triple head background projector while working in the special effects department at Warner Brothers earned him a special Academy Award in 1938.  He also received four nominations for his special effects work on The Private Lives of Elizabeth and Essex (1939), The Sea Hawk (1940), The Sea Wolf (1941) and Desperate Journey  (1942).

Although Haskin was not usually known as an actor’s director, The Boss proved to be a triumphant showcase for John Payne, who gives one of his strongest performances here.  Payne, who had a busy year in 1956 with four releases (including the good Korean War picture Hold Back the Night and the superior color noir Slightly Scarlet), gives a powerful, snarling performance–a feral, growling turn that’s a million miles away from the smooth romantic of all those earlier Fox musicals for which Payne was so well remembered.  Sporting an ugly, close-cropped haircut, his fleshy face permanently scowling and his eyes perpetually squinting in distrust, Payne employs no subtle tricks to make us ‘like’ Matt, as many lead actors might have done with their audience.  His gangster is rotten to the core, and Payne never lets the viewer “in” with Matt, so we watch both fascinated and without pity as he destroys all those around him…and then himself.  It’s a remarkable performance, in a remarkable little film.