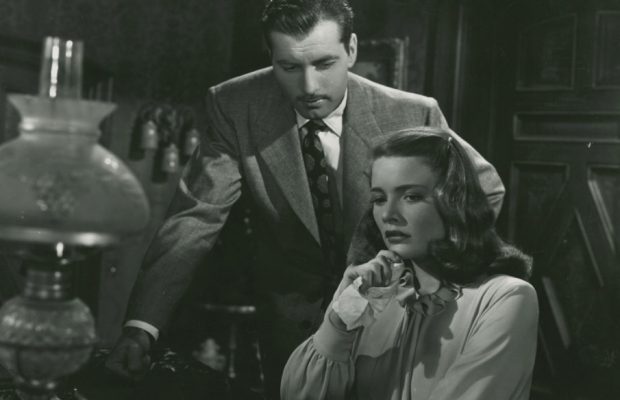 Toronto Film Society presented The Brasher Doubloon (1947) on Monday, March 11, 2019 in a double bill with Farewell, My Lovely as part of the Season 71 Monday Evening Film Buff Series, Programme 6. 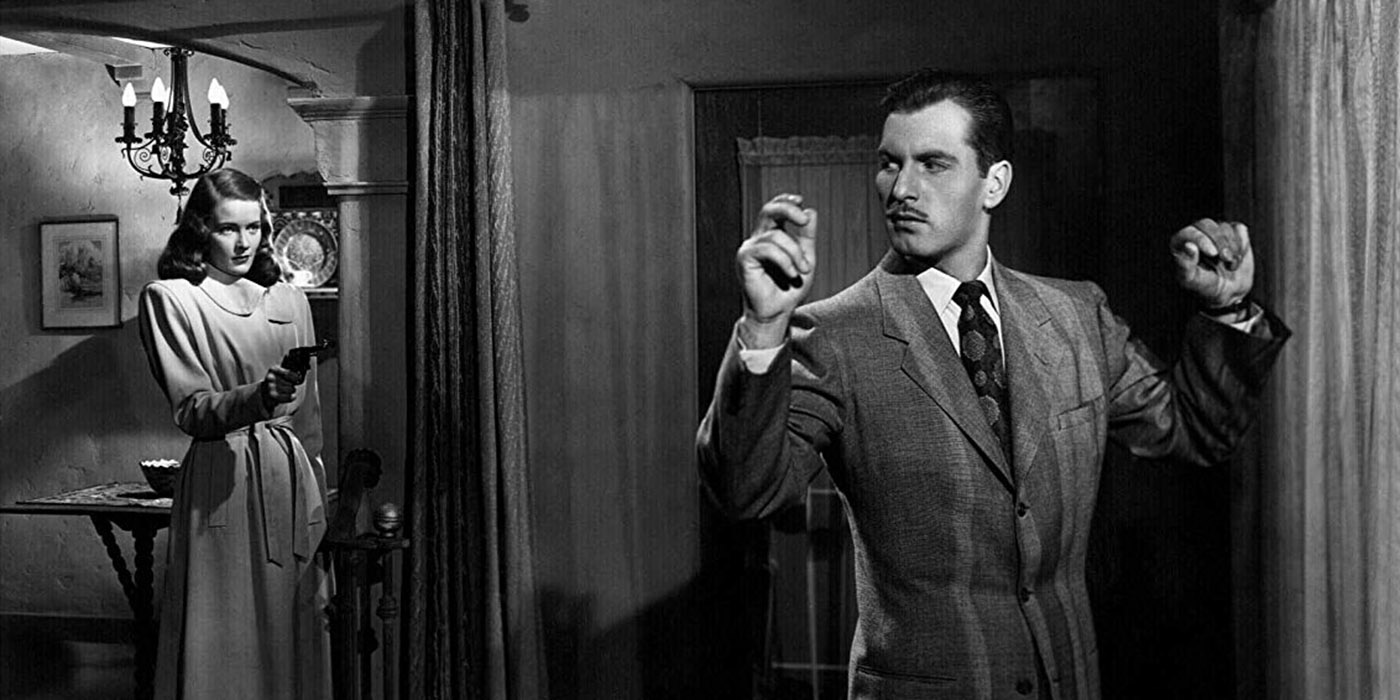 What is the Brasher Doubloon, I wondered when I saw the title of the film?  In case you’re in the same boat as me, it’s a valuable coin and it’s at the centre of tonight’s Philip Marlow mystery.

Los Angeles, where, of course, Hollywood is located, was used as the locale for many Noirs.  This was mostly to help with the smaller budgets given to this genre of films, and The Brasher Doubloon was no exception.  Author of tonight’s film, Raymond Chandler, was the scriptwriter for Double Indemnity, and we can glimpse the changes of his LA in the three short years that separate the making of these two films.  From its Pasadena mansion buffeted by the warm Santa Ana winds to Marlowe’s rundown firetrap of an office; with old Victorian streets and buildings of Bunker Hill panned by the camera and described by Marlowe’s voice-over narration as once being the choice place to live, by 1947 these now rundown areas were where people, who now had no financial choice, couldn’t leave.  Director John Brahm also employed newsreel footage of an actual Tournament of Roses parade in Pasadena to explore different viewpoints on a murder.

Florence Bates, who incidentally happened to play a customer in our last Monday night screening, The Devil and Miss Jones, but is most memorable in Hitchcock’s Rebecca as the snarky, crass employer of our anonymous heroine, plays just as mean and blatantly more nasty a character in The Brasher Doubloon.  I, for one, am looking forward to watching Ms. Bates once again in action. 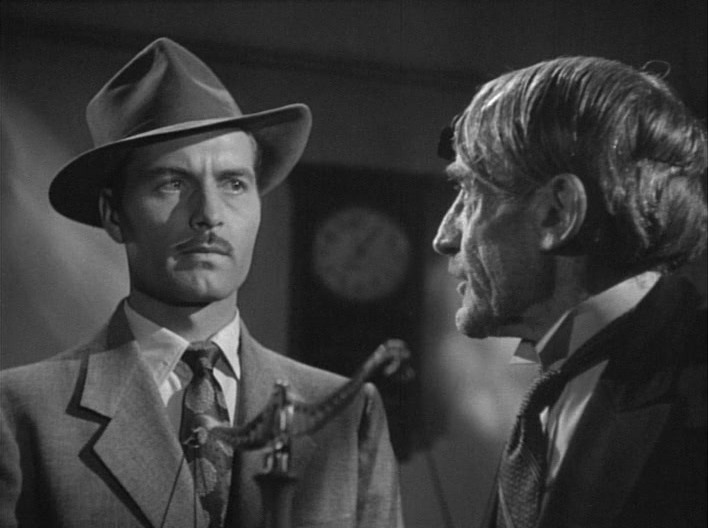 The Plot: Philip Marlowe is hired by a wealthy widow, Elizabeth Murdock, when a rare doubloon is stolen, and he soon discovers that it is being used for blackmail purposes. His involvement ends him up in the middle of a much more complicated case, one that involves blackmail and murder. This forces him to deal with a number of strange individuals, including Merle Davis, a deranged secretary to Murdock, whose own role in the matter is considerably more sinister than it seems.

Critical Response: When the film was released, the New York Times film critic panned the film, writing, “…Chandler’s popular ‘shamus’ and, we might add, his efforts to recover the stolen Brasher Doubloon, a rare coin with a violent history, is the least of his exploits to date. Perhaps this is due equally to a pedestrian adaptation of Mr. Chandler’s novel, The High Window; to the plodding and conventional direction accorded the film by John Brahm; and to the lack of conviction in George Montgomery’s interpretation of Marlowe.” Film critic Dennis Schwartz, on the other hand, liked the film, and wrote, “A film noir similar in theme and almost as enjoyable as The Big Sleep, as private investigator Philip Marlowe (George Montgomery) leaves his Hollywood office for a case in Pasedena from a rich old widow who lives in a dark, old house. It’s just smart enough of a film noir to be considered a classic…. This brooding Gothic melodrama is brought to life by John Brahm’s expresionistic ambiance ably photographed by cinematographer Lloyd Ahern, and by the sharp, hard-boiled Raymond Chandler story the film is adapted from, The High Window. The film is not as complex as the novel, but it makes good use of its snappy dialogue and has vividly grotesque characterizations to go along with the dark mood it sets. Fritz Kortner stands out in his villainous role, which he plays like Peter Lorre would; while Florence Bates is charmingly acerbic in her creepy role as a bitter, old hag.”

Production: 20th Century Fox bought the film rights for The High Window in 1942, and then used the plot for a different film, in a B-picture series called A Time to Kill; but the growing popularity of films based on Chandler’s work prompted the company to make a more faithful version. After various casting and script changes, the film’s title was altered to The Brasher Doubloon.

George Montgomery (1916-2000): Born in Montana of Ukrainian immigrant parents, he was reared on a large ranch and briefly attended university before dropping out to leave for a career in Hollywood. He worked first for MGM and then as a stunt man for Republic, where he appeared in many Westerns featuring Gene Autry, Roy Rogers, and John Wayne during the 1930s, before signing for 20th Century Fox in 1939. After more B-westerns, he moved to minor stardom as a love interest for Ginger Rogers, Betty Grable, and others. He joined the Air Force in 1943, and then returned to Fox before leaving the company in 1947 and making westerns and war films for others, few of them of any great distinction. He also worked for the stage and television, in his later years.

John Brahm (1893-1982): Born in Hamburg, he started his theatre career as an actor in Vienna, Berlin, and Paris before leaving Germany when Adolf Hitler came to power and moving to London, where he directed a remake of D.W. Griffith’s Broken Blossoms, in 1936. He then moved to Hollywood and worked extensively there, and for television in the 1950s and 1960s. His best known films are The Lodger (1944), Hangover Square (1945), and The Locket (1946).

Raymond Chandler (1888-1959): Widely regarded as the greatest of all detective story writers, on the basis of his seven novels, many short stories, and some films scripts, he was the founder of the “hard boiled” school of detective fiction, along with such contemporaries as Dashiell Hammett and James M. Cain. He was born in Chicago and moved with his mother to England, where he received an excellent education at one of the country’s finest public schools. He saw army service in the first World War before moving to the U.S. and settling near Los Angeles. There, he began to write “pulp” fiction, publishing his first story in 1933 and his first novel, The Big Sleep, in 1939, which was filmed by Howard Hawks in 1946, starring Humphrey Bogart and Lauren Bacall. It was followed by Farewell, My Lovely and other novels, most of them also filmed. Chandler worked as a screenwriter in Hollywood on such films as Double Indemnity (1944) and Strangers on a Train (1951), though he despised the commercial ethos of the studios. The prose style of his fiction has been highly admired by other writers, and he has had a strong influence on winning critical respectability for detective fiction, generally.