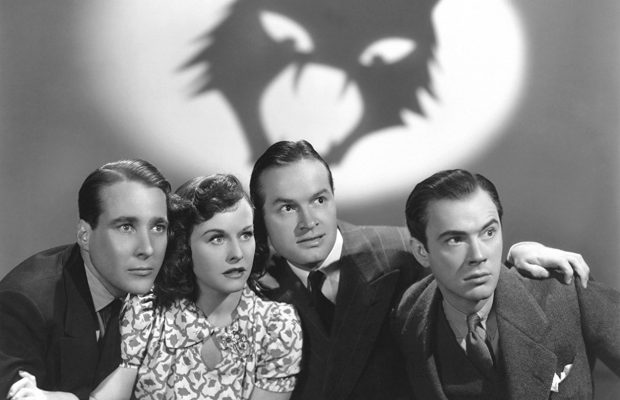 Toronto Film Society presented The Cat and the Canary (1939) on Sunday, December 10, 1989 in a double bill with San Diego, I Love You as part of the Season 42 Sunday Afternoon Film Buffs Series “A”, Programme 5.

The Cat and the Canary has the distinction of having started a whole new sub-genre of horror comedy in the Hollywood cinema.  Based on an earlier film of 1927, the sound remake ignored the earlier film’s pretensions to high art and just set out to have a good time.  The basic plot premise promised plenty of thrills and chills: twenty years after the death of a wealthy eccentric, relatives gather in his swamp-bound house to hear the reading of his will, and the heir driven near to madness by the next heir, a dangerous lunatic who must be one of the stranded party.  It was the inspiratio nof the makers of the 1939 film to add the young Bob Hope and plenty of side-splitting wisecracks to the mixture.  But as Leslie Halliwell writes in Halliwell’s Hundred, explaining why the film remains one of his favorites: “The extraordinary thing about this entertaining little movie is not that it rocketed Bob Hope to stardom or that it started a new vein of horror comedy, but that its photography and art direction are so endurably stylish.  The credits are superimposed on a shot of shutters flapping in the moonlight, perfectly encapsulating the gist of the entertainment; afterwards we barely venture outside the house, but we can smell the musty dampness of the unlived-in rooms, feel the spidery shadows of the secret passages which seem to run behind every wall…until in the climactic sequence we are led with the over-venturesome heroine into the narrow, dangerous darkness behind the library shelves.  The panel closes at the touch of a claw-like hand on a lever; a knife flashes the end of an unneeded associate villain; and the dreaded cat creature, hardly glimpsed till now, chases his prey down sagging steps, round jagged brick corners, and up into an outhouse where in the nick of time, as the heroine cowers beneath a swinging lamp, he rips off his fright mask and gets his come-uppance from a vengeful housekeeper.  This terrifying five-minute sequence, in shocking contrast to the preceding wisecracking, is so elegantly designed, so dramatically lit, and so nimbly directed, that for sheer cinematic bravura it ranks in my mind with the Odessa Steps sequence from The Battleship Potemkin and the charge through the palace from The Scarlet Empress.” 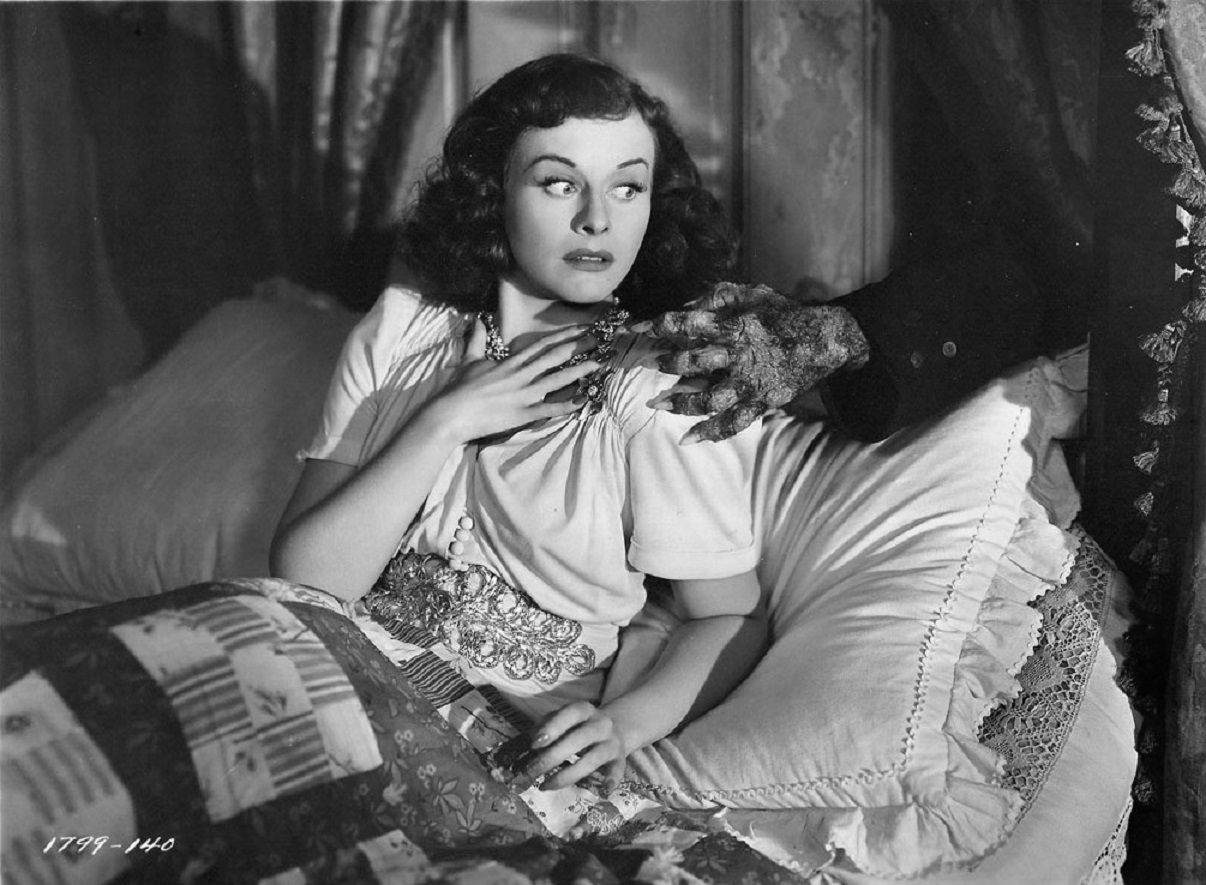 Halliwell praises the performance of Nydia Westman, calling her “the perfect wide-eyed feed.”  Indeed, she does set up some of Hope’s best wisecracks.  “Don’t these big empty houses scare you?” she asks.  “Not me,” says Hope, “I was in vaudeville.”  A little later she does it again.  “Do you believe people come back from the dead?”  Hope looks up in surprise.  “You mean like Republicans?”  George Zucco also comes in for praise in his role of the lawyer who reads the eccentric’s will.  According to Halliwell, “he is such a perfect Lawyer Crosby that we are sorry when he chooses the wrong place to stand by the library shelves and is abruptly carried off by a hirsute paw which emerges from the wainscoting.”

Paulette Goddard appears here in one of her first roles after emerging from Charlie Chaplin’s tutelage and her success in his Modern Times (1936).  One wonders, however, if her success in this film quite consoled her for the loss of the part of Scarlett O’Hara in Gone With the Wind for which she was the odds-on favorite until the arrival of Vivien Leigh.

Frank S. Nugent, reviewing the film in the New York Times had the following comment on Bob Hope’s comic style: “It is a style so perfidious we think it should be exposed for the fraud it is.  Mr. Hope’s little trick is to deliver his jests timidly, forlornly, with the air of a man who sees no good in them.  When they are terrible, as frequently they are, he can retreat in good order, with an “I told you so” expression.  When they click, he can cut a little caper and pretend he is surprised and delighted too.  It’s not cricket, but it is fun.”  Fifty years later, Hope’s comic style continues to be good fun and so does The Cat and the Canary.