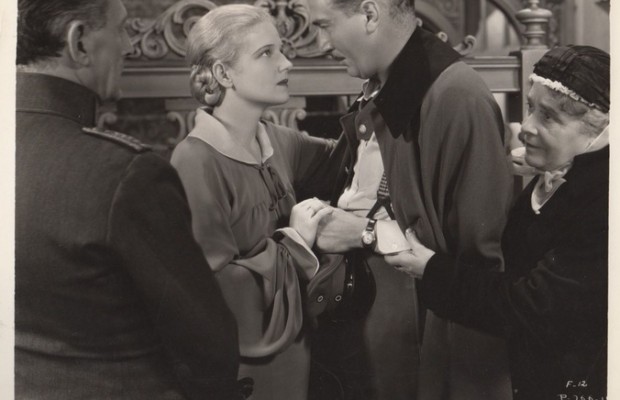 A belated viewing of The Fountain establishes it as a key film (in director John Cromwell’s career), embodying all of these qualities: memories of love motivating relationships between Ann Harding, Brian Aherne and Paul Lukas in a story that is presented in a manner and with décor which can aptly be described as elegant, and directed with great assurance and style.

The sensitivity and low-keyed nature of the direction and the leading performances are aided by some beautifully composed soft-focus photography and a surprisingly non-verbose script, and these advantages overcome the occasional drawbacks of the overlavish décor and a rather syrupy Steiner score.  The film opens against a musical background, with high-key shots of a train carrying English officers to a Dutch internment camp during the First World War, notable for the scene’s absence of dialogue–this type of motif is picked up again when Ann Harding plays the piano and the camera cuts away from her to record the silent reactions of members of her family or friends.

The metaphysical content of the film is stressed by a verse from Coleridge’s ‘Dejection’ that appears at the end of the credits: From outward forms to win/the passion and the life/from the fountains within.  Although this dominates the film, the method of presentation reflects Cromwell’s style: the camera movements represent the restlessness and soul-searching of both Aherne and Harding; the aforementioned use of a musical track to eliminate the need for dialogue, and the build-up to the entrance of both Harding and her German husband, Paul Lukas….

In spite of her delicate appearance, underlined with gestures such as her involuntary clutch at the top of her dress near the throat as she reads of Lukas’s wounds, and Cromwell’s penchant for composing shots around her with candles flickering in the foreground, Ann Harding has a winning directness in speaking her mind; Aherne and Lukas reflect gentleness, integrity and dignity; and Jean Hersholt contributes a well-rounded cameo as an understanding father, countering the malice of Sara Haden’s role.  The Fountain is undoubtedly one of Cromwell’s most outstanding achievements, and remains one of his favourite films today.

Ann Harding: once a name to conjure with, now a lingering memory of calm loveliness and great dignity, consummate talent and real artistry.  In a series of heavy-breathing melodramas she played without histrionics, too soon taken for granted.  But at the outset, when Talkies arrived, she was one of the screen’s aristocrats.

One of the biggest of the big movie stars in the early 1930s was RKO’s Ann Harding.  She was the acme of cool blonde pulchritude, with her long, fair tressses pulled back into a trademark bun and her low, throbbing voice purring those lines of dialog.  She was far from being a typical Hollywood glamour girl-flapper.  She eschewed the fads of drawn-on eyebrows, overpainted lips, and beaded eyelashes.  She was a real lady in the days before ‘lady’ became a dirty word.