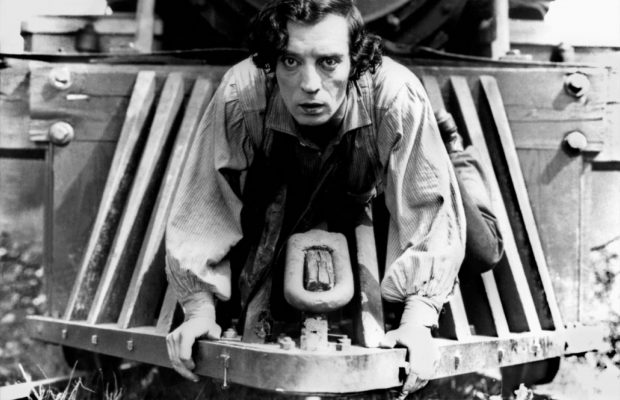 The American Film: Experiment and Comedy

This simple one-reel fantasy satirizing Hollywood was the first American experimental film to show the influence of The Cabinet of Dr. Caligari.  Its makers: Robert Florey, former European journalist and assistant director; Slavko Vorkapich, a painter with an intense desire to make poetic films, who later became Hollywood’s most noted “montage” specialist; and Gregg Toland, now dead, who developed into the distinguished cinematographer of Citizen Kane, The Grapes of Wrath, The Little Foxes, Wuthering Heights and The Best Years of Our Lives.  Most of Extra was made at night in Vorkapich’s kitchen, out of “odds and ends”: Paper cubes, cigar boxes, tin cans, moving and reflected lights (from a single 400-watt bulb), and erector set, cardboard figures–and a great deal of ingenuity.  Scrap negative film stock salvaged from the studio was used.  The final cost: less than $100.00.  Its style, broad and impressionistic, disclosed a remarkable flair and resourcefulness in the use of props, painting, camera and editing.  Its makers were still “on the outside of film production looking in”, and the film reflects their bitterness and discouragement–but caused so much interest that it was booked into 700 theatres in the U.S. and abroad.  Florey made three other, less celebrated experiments (The Loves of Zero, etc.), then was absorbed into the Hollywood commercial stream where he made many “programme” pictures but few of much merit.  Among the better ones: an adaptation of Poe’s Murders in the Rue Morgue and The Face Behind the Mask, with Peter Lorre.  He was assistant to Chaplin on Monsieur Verdoux, and now works in TV.

Today pretty well accepted as Keaton’s masterpiece, The General did not quickly attain this ranking.  While certain critics of its time appreciated its qualities, notices were rather mixed, some feeling it an ambitious but misguided attempt at a “big” picture, others questioning the taste of some incidents in the battle-scenes. (As examples of how wrong critics can be, some of the original reviews of Chaplin’s Gold Rush and Modern Times were lulus.)  In my own hometown of Winnipeg (admittedly notorious for its strange treatment of many films!) The General wasn’t even accorded a first-run showing, “premiering” in a minor neighbourhood house.  Even after World War II, when Keaton’s films were first shown at Toronto films societies, people were wont to say “well yes, I liked The General, but not as well as The Navigator“.  Yet with repeated viewings, The Navigator begins to lose a bit of its magic, while The General seems better each time one sees it.  Apparently it is one of Keaton’s won two favourites; and its reputation among film historians and critics has steadily grown.  A triumph of a special kind was achieved when, after a screening at one of the Stratford Film Festivals, a young doorman who had never seen a silent movie declared it “the best picture I’ve ever seen!”  The General, by the way, is based on a true incident of the Civil War, since dramatized in an excellent Disney “live-action” feature, The Great Locomotive Chase.

Books of film-history seem to comment on Keaton generally rather than specific films.  Bardeche and Brasillach saw his style as an extraordinary contrast between immobility (his face) and suppleness (his body); and the essence of his comedy as the relationship between man and machine (a camera in The Cameraman, a ship in The Navigator, a locomotive in The General).  They call  him a “mathematician hily gifted in calculating laughter”, and say that “toward the end of the silent era there was hope that he would produce a masterpiece by quite seriously opposing machine to man in a profoundly modern comedy whose underlying intent would have gone far beyond our laughter”.  (Perhaps Charlie’s Modern Times and Clair’s A Nous la Liberte have come closest to this?)

Paul Rotha said “his humor is dry, exceptionally well constructed and almost entirely mechanical in execution.  His comedies show an extensive knowledge of the contrast of shapes and sizes, and an extremely pleasing sense of the ludicrous”.

James Agee’s fine analysis of Keaton has been so oft-quoted in programme notes that I have made an arbitrary decision to skip it on this occasion.  (See his definitive chapter “Comedy’s Greatest Era” in the book Agee on Film.)  He thought the photography in The General so authentic as to be “within hailing distance of Matthew Brady”.

In an analysis of The General in the Wisconsin Film Society’s Film Notes, Cameron Macauley says: “Keaton’s comic brilliance depends on his deft handling and interplaying of three types of visual gags.  The first is a simple comic irony; a happening clearly seen and understood by the audience, but unknown to the victim even after its completion, (e.g. the sword and the enemy sniper).  The second type is also a visual irony in that we see it happen to its unaware victim–but the victim does not remain unaware.  (Johnnie riding on the connecting rod between the locomotive wheels).  When an occurrence of simple comic irony is capped by the victim’s own final realization of what has happened to him, we are allowed to renew respect for Johnie; it forms a bridge for our sympathy and we are not allowed to believe he is always unaware.  The third type of visual gag is a reverse irony that makes the audience the butt of the gag.  Johnnie has so often been the victim that we are never quite prepared to think he won’t always be, until suddenly in a most impossible situation, with all the cards stacked against him, he ingeniously comes through, usually in the nick of time with the greatest skill.  (The timbers on the track).  The irony-contra-audience keeps us guessing and never allows us to underestimate our hero, for it happens without warning to reveal his hidden ingenuity, always applied where it is most needed.  As these three types of visual gags are interplayed, we never know which to expect.  This sustains our interest and constantly tickles our funnybone.  Just how they are ordered and perfectly timed with appropriateness to the plot is something we need not analyze.  Let’s call it Keaton’s artistry–a comic ingenuity never surpassed.”

Some other notable Keaton silents: Shorts–The Haunted House, The Goat, The Boat, The Playhouse, Balloonatics, Cops, Sherlock Jr.  Features–Three Ages, Our Hospitality, Battling Butler, College, Steamboat Bill Jr., Go West, Spite Marriage.  He carried on for awhile as a talkie star, with less success but still enjoyably, in Free and Easy, Parlor Bedroom and Bath, The Passionate Plumber, Sidewalks of New York, and with Jimmy Durante in Speak Easily and What! No Beer?.  After some unfortunate Columbia shorts, he worked as a gagman on Red Skelton films, and made brief, welcome appearances in such features as San Diego I Love You, In the Good Old Summertime, Sunset Boulevard, Chaplin’s Limelight and Around the World in 80 Days.  For a time he returned to vaudeville (from which he had first come to films), and now there are plans to re-show some of his classics both on TV and in theatres.