Toronto Film Society presented The Glass Key (1935) on Monday, January 9, 1984 in a double bill with The Blue Lamp as part of the Season 36 Monday Evening  Film Buffs Series “B”, Programme 5. 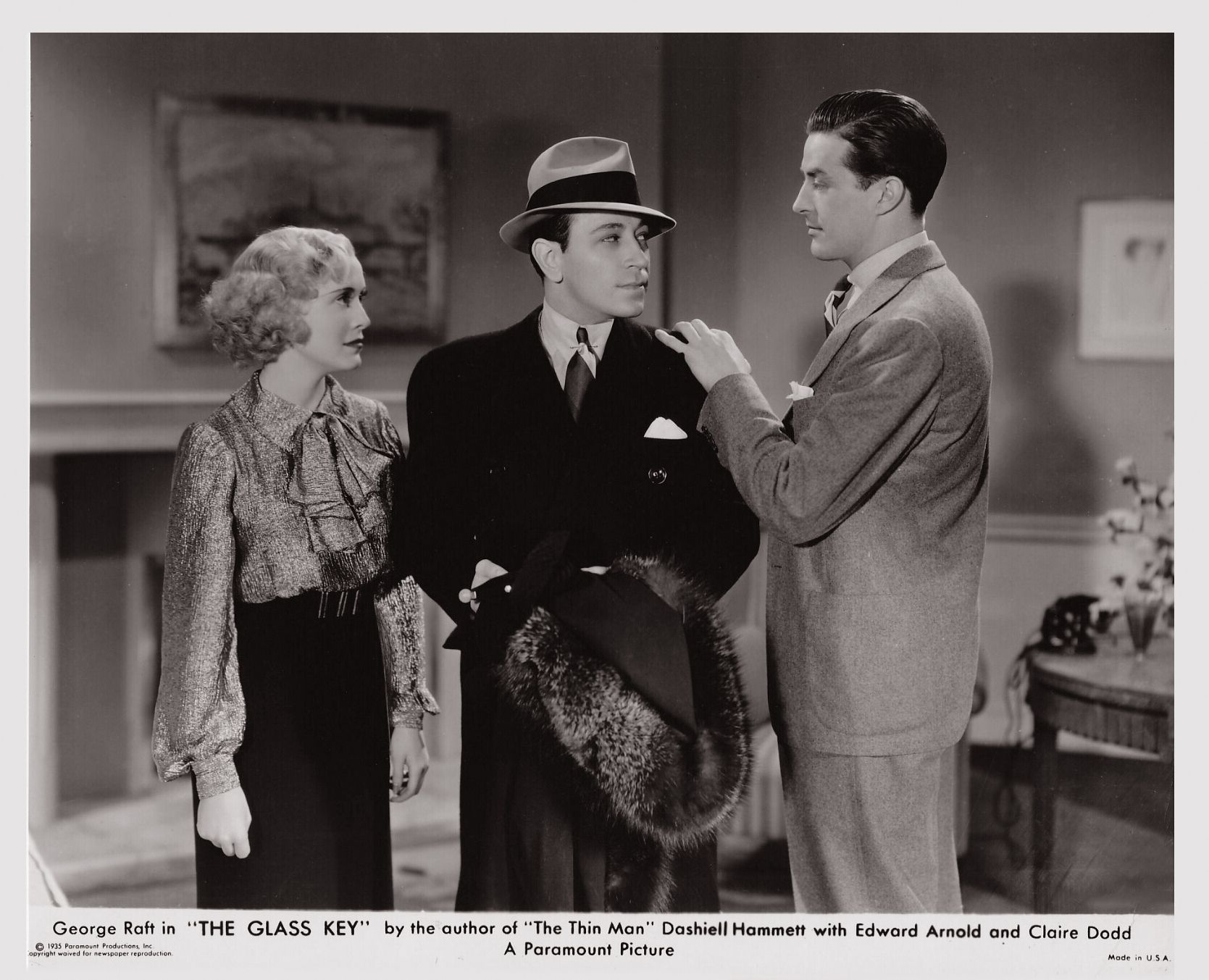 Film titles can often be puzzling, and tonight’s film certainly qualifies for this distinction.  A glass key, it develops, is an underworld figure of speech for an invitation which is motivated by expediency rather than friendliness–in short, a transparent offer.  The picture is based on a novel by famed crime writer Dashiel Hammet, who seems to have shared a fondness of enigmatic titles with compatriot James M. Cain (“The Postman Always Rings Twice”).

Unlike Hammett’s hilarious and witty “The Thin Man” stories, The Glass Key tells a straight forward tale of suspense and murder.  The story centres around a moderately corrupt politician, Paul Madvig (Edward Arnold) who is doing all right for himself until he decides to go in for clean politics and joins forces with a Senator who is seeking re-election.  George Raft, his crafty lieutenant, is skeptical about the rewards of virtue, but respects Arnold and goes along with him.

Arnold, however, now makes a dangerous enemy in the form of an underworld czar by closing down his gambling club.  Then, after the Senator’s son (Ray Milland) is mysteriously murdered, the gangster spreads the story that Arnold was behind the murder because of the man’s attentions to Arnold’s daughter.

Although George Raft received top billing, The Glass Key really belongs to Arnold, a talented Broadway actor who became typecast as overbearing, blustering businessmen and politicians in such films as Meet John Doe.  With his portly figure usually encased in a three piece suit, he looked every inch the stereotype of the plutocrat.

George Raft, once described as the most wooden of actors, seems to have had the dubious distinction of turning down more good roles than almost any other actor, among them the part of Walter Neff in Double Indemnity.  Of his performance in tonight’s film, the New York Times said charitably, “Mr. Raft is happily cast in a role which allows him to be sinister and suave with out making excessive demands on his talent as an actor.”  The hulking Guinn Williams plays Jeff, a simple-minded but sadistic hood who “works over” Raft.

Ray Milland, just starting his Hollywood career, has a short-lived role as the murdered playboy, the type of part Britisher Milland, with his smooth, charming manner often played until he broke the mold in The Lost Weekend ten years later.

Director Frank Tuttle is one of the hundreds of unremembered craftsmen who helmed Hollywood’s output during the 30’s and 40’s.  He is probably best known for direction 1942’s The Gun For Hire, skillfully directing novices Alan Ladd and Veronica Lake to memorable performances.  That same year The Glass Key was remade with Brian Donlevy in the Edward Arnold role and Alan Ladd filling George Raft’s shoes.