Toronto Film Society presented The Great Manhunt (1950) on Monday, November 16, 1987 in a double bill with Night Train to Munich as part of the Season 40 Monday Evening Film Buffs Series “B”, Programme 2.

In 1945, Launder and Gilliat formed their own production company, Individual Pictures, which later became Launder and Gilliat Productions.  Their films were of their own scripts and one directed while the other took the active producer’s role.  They mainly undertook typical genre films and it is difficult to differentiate Gilliat’s directorial style from Launder’s.  In the 1950’s they turned to comedy and were quite successful with the St. Trinian’s Series, but in general, they made only mediocre films. 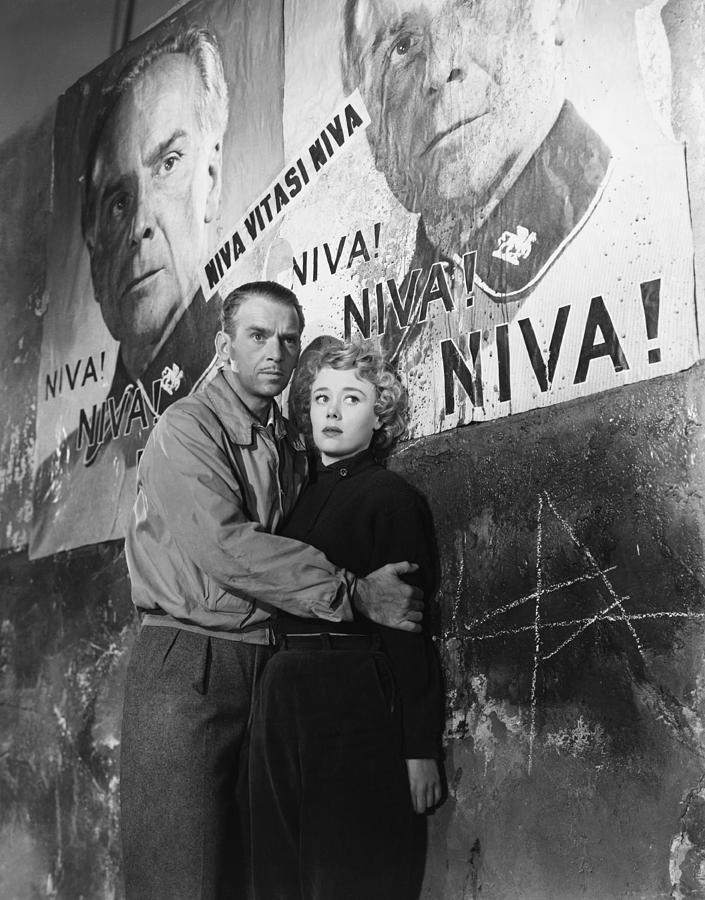 The Great Manhunt was their return to the thriller genre and again there are traces of Night Train to Munich and The Lady Vanishes.  Dr. John Marlowe, an American heart surgeon, is invited under false pretenses to Vosnia, a mythical Balkan country.  The real reason for the invitation is so that Marlowe can operate on the country’s dictator.  A few days later the dictator dies and Marlowe attempts to flee the country.  The Chief of the Secret Police, Colonel Galcon, does not announce the dictator’s death and uses a double to maintain the illusion that the dictator is well.  Marlowe is seen as a threat because he is only one of the few people who knows the truth.  Eventually Marlowe is aided by Lisa, a chorus-girl who wants to flee the country and by Theodor, a black marketeer.  Marlowe crosses over the mountains to the border.  Watch for another sequence with a cable car.  The locations were shot in Italian towns and the Italian Dolomites.

As in the first film, the pace charges ahead without a pause.  It is interesting to note that the Vosnian language was created by Georgina Shield, an instructor at the London School of Languages. Every actor who went on location learned his lines phonetically and the English was provided for comprehension.  The language is used without subtitles and further adds to the vulnerability of Marlowe and to the suspense of the film.

The Great Manhunt did well at the box office, initially on the drawing power of Fairbanks.  The reviews were somewhat reserved, noting the similarities between the Hitchcock film and the Reed film.  The humour of Launder and Gilliat is restrained here in comparison with Night Train to Munich, but Variety felt that Herbert Lom had “the choicest lines and the surest part”, and believed that he walked off with the film.  Bosley Crowther in The New York Times commented thus: “A more ingenious ending might have been worked up, we might add.  But don’t let this minor thought deter you from a picturesque and tingling ‘chase’ film”.