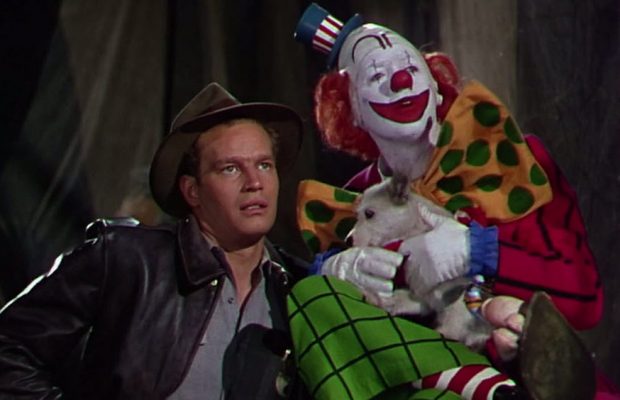 Toronto Film Society presented The Greatest Show on Earth (1952) on Sunday, November 8, 1981 in a double bill with The Trouble With Women as part of the Season 34 Sunday Afternoon Film Buffs Series, Programme 3. 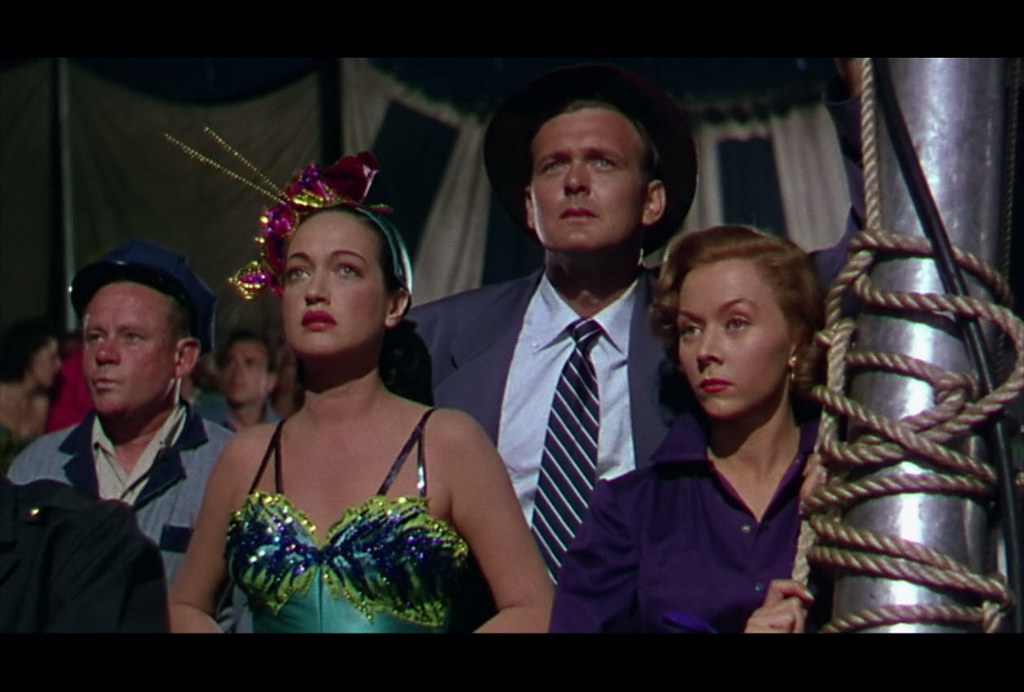 Cecil B. DeMille, in addition to being producer, director and commentator of this film, also provides our program notes.  The following comes from his Autobiography (Prentice-Hall, 1959; p. 403 et seq.):

Sometimes, as my staff could feelingly relate, it takes me a long time to reach decisions.  Sometimes, however, I hear and heed opportunity’s first knock.  One such time was a day early in 1949 when I saw an inconspicuous item in the Hollywood Reporter.  It said that Ringling Bros. and Barnum & Bailey were interested in the possibility that a motion picture might be made about their circus.  Within five minutes I was closeted with Henry Ginsberg, then head of production at Paramount, closing the deal for my next picture: The Greatest Show on Earth.

There had been several good, and some not so good, pictures with a circus background, but there had never been what I would call a circus picture: one in which the circus itself was the star.  There is no other institution on earth like the American circus.  It is an army.  It is a family.  It is a city, always on the move.  It is an agile giant.  It is sweat and fatigue and danger endured to send a rippling wave of thrills and laughter across a continent.  All the nations of the world are represented in it, but those who are “with it” form a tight clan set apart from everyone else in the world.  Yet those men and women, who walk casually into cages filled with snarling lions, who seem to fly through the air as if it were their native element, who drive the stakes and haul the ropes and reef the canvas that turn some vacant lot into a magic wonderland, are men and women very much like those who, from town to town, sit on the hard benches under the big top and for a few hours taste the wonder of childhood again, on circus day.  That–all of that–is what I wanted to put on the screen.

But first I had to learn it from the inside.  I literally joined the circus: in the summer of 1949 I traveled and lived “with it” on its trek through heat and rain across several states of the Middle West.  Gladys Rosson (his secretary) was with me and trouped as wholeheartedly as if she had been to the sawdust born.  Her notebook of 135 pages is crammed with incidents comic and terrifying, anecdotes and bits of business for possible use in the picture, circus slang carefully noted, vignettes of life in the “backyard” when the make-up is off and there are washing and mending to be done and babies to be bathed and gossip exchanged, as in any other small-town neighborhood; and if Gladys’ notes run only from A for Accident to W for Wire Walker, you may be sure that we saw nothing starting with X, Y, or Z, or it would be there. . . .

After a month’s work of shooting at the winter quarters in Sarasota, we returned to Hollywood for two months of studio production, then rejoined the circus in Washington and went on with it to  Philadelphia, photographing actual performances under the big top in both cities, with our stars playing their roles ont he trapezes, astride the elephants, and rollicking with the clowns, before the actual circus audiences.

Lighting and photographing under those conditions, so different from the sound stage in the studio, was a triumph of the cinematographers, George Barnes, Pev Marley, and Wallace Kelley.  Only a trained eye can tell which audience shots were made under the big top and which in the studio–except, of course, for such closeups as the delightful bit in which Bing Crosby and Bob Hope consented to appear with no listing of their names in the case or any other warning before our audience in the theatre suddenly sees them, side by side, solemnly swinging their heads left and right as their eyes follow the swinging of a trapeze . . . .

For the rest of DeMille’s comments on making of th The Greatest Show on Earth we refer you to the book–which incidentally is well worth reading as a whole.